As per the fifth edition of the Sporting Nation report, the overall sports sponsorship grew by 14% in 2017, rising from Rs 6,400 crore to Rs 7,300 crore. As per GroupM’s report, Indian adex in 2017 was Rs 61,263 crore and 12% contribution to the overall ad spends are estimated to be from sports sponsorship alone 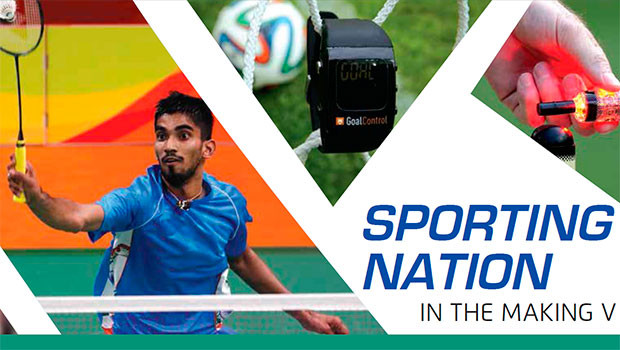 Use of technology and broadcast of off season non-live sports including the locker room scenes could change the face of Indian sports, according to Vinit Karnik, Business Head, ESP Properties.

“Two things that will significantly change the face of Indian sports – first is the way technology is used in our business. It will bridge the gap between multiple stakeholders coming together, a fan watching a sporting event at a stadium, then the one watching at home or the one watching on the move on OTT. It will help in enhancing the viewer experience,” said Vinit Karnik, Business Head, ESP Properties at the launch of Sporting Nation In The Making-V.

The second trend, as mentioned by Karnik, is the off season non-live sports. The world over, locker room scenes, what happens in the life of a sporting icon outside the ground and all this makes a lot of interesting content that people love to consume. “India is not very mature in this segment. We believe IPL teams being profitable this year, a significant amount of focus is going to be on non-live content,” he added.

ESP properties, the entertainment and sports arm of GroupM and SportzPower, a sports business news source, released the 2018 report on sports sponsorship in India.

The report highlighted that overall sports sponsorship grew by 14% in 2017. Media investments contributed to the largest portion of the pie –55% of overall spends – followed by ground sponsorships. Sports advertising rose to Rs 7,300 crore, a substantial leap from Rs 6,400 crore in the previous year. 2017 was a milestone year in sports sponsorship as the US billion-dollar mark was crossed for the first time.

“This is significant because we are just a 10-year-old economy and it was IPL that showed us the way – how the league ecosystem can grow. As a result, we have developed over 10 premier leagues. We must stand tall and celebrate the $1 billion number,” said Vinit Karnik, Business Head, ESP Properties.

As per GroupM’s advertising investment forecast This Year, Next Year (TYNY), Indian advertising expenditure in 2017 was Rs 61,263 crore and this report estimates that 12% contribution to the overall ad spends are from sports sponsorship alone.

Overall on-ground sponsorship grew by a healthy 15% from Rs 1665 crore to Rs 1337 crore. Within this, Indian cricket grew by 18.9% as India played more matches in 2017 than 2016. In 2018, again, this number might not be so encouraging as the India cricket team is playing most of the matches abroad. On-ground sponsorship in cricket crossed the $100 million mark in 2017.

“People always ask that if cricket is so large what does it mean for the standpoint of other sports? Every country – right from North America or any of the European markets – has a one ‘most followed sport.’ Cricket is that sport for India and we should celebrate this massive growth, instead of being apologetic about it,” said Karnik.

Sponsorship of non-cricketing sports grew in 2017. India’s second biggest sport by participation and attendance, football, grew by a considerable 64% from Rs 110 crore to 179 crore. “This number did not exist about three to four years ago,” he said.

India hosted its first ever FIFA U-17 World Cup that became the most attended in the history of the event. Attendance for this Football World Cup was a record 1,347,133, surpassing China's 1985 audience of 1,230,976. Since last year, ISL is 10 team, 18+ week showcase, up from eight teams and 10 weeks in the last season. ISL sponsorship has grown by 22% from the previous year. The gap between PKL and IPL TV ratings is narrowing – PKL delivered 1.5 TVR with 312 million reach and IPL delivered 2.7 TVR with 411 million. Football has a tremendous reach in West Bengal, the North East, Kerala and Goa. PKL delivers well in Patna, UP, Jaipur and Hyderabad among others.

Similarly, all the other sports recorded a sponsorship figure of Rs 275 crore, down from 2016’s Rs 296 crore. “This number is important because this signifies there is scope for a fourth sport and it is an important part for significant growth of the market. Till few years ago, it was just cricket and in these years, football and kabbadi together added about a couple of hundred crores to the ecosystem,” added Karnik.

2017 also saw the birth of five new franchise based leagues – UTT, SBL, SFL, Cue Slam and P1 Power Boating. Brands are bullish about investing in emerging sports; 25% increase in franchise fees came from developments in other sports, as cricket remained unchanged. Thirty-six new franchises were added across all new and existing leagues. While demonetisation and GST hit overall ad expenditure in 2017, the sports sector has been able to ride the storm with a steady and positive trajectory. All major sporting leagues managed to bring on board sponsors at a 100% or more incremental value for the title sponsorship. Specifically, the IPL has emerged as one of the top five most valuable global sports properties in the world.

Football team sponsorship has grown by 41.4%. ISL team sponsorship grew by 22% due to increase in the number of teams and matches, while the International Football Club sponsorship by Indian brands went up to Rs 75-80 crore. 24.8% (from Rs 548 crore to Rs 684 crore) upside in franchise fees came from developments in other sports, as cricket remained unchanged. In 2019, when IPL stops paying franchise fees, this number might come down to a certain extent. But the growth can be credited to the five new franchise based leagues – UTT, SBL, SFL, Cue Slam and Powerboat P1 – and the new teams, two in ISL and four in PKL.

Brand endorsements by sports personalities have fallen by 17%, majorly because of the end of the two deals between Lionel Messi and Tata Motors and Tiger Woods and Hero MotoCorp, respectively. “Though these are international names, these deals were done for the Indian market,” explained Karnik.

Cricket endorsements have grown by 15.5% with Virat Kohli leading the charts, endorsing 19 brands worth more than Rs 150 crore, up from last year’s Rs 120 crore from 20 brands. The only two closest ones are MS Dhoni with 13 brands and Rs 55-60 crore endorsement value and Sachin Tendulkar with nine brands worth Rs 25-30 crore.

Thomas Abraham, Co-Founder, SportzPower, said, “We always had the top three to four brand ambassadors and there was a time when we had Dhoni and Tendulkar, both being on the top priority charts. Now, there’s just Kohli. There is no No.2, right now.”

“Predominantly, in the last 15-20 years, we have seen film stars being the preferred choice to be signed as brand ambassadors, which certainly is now changing to some extent,” Karnik added.

Among media investments in sports, the biggest numbers come from television at about Rs 3,379 crore, while print is at Rs 356 crore and digital at Rs 330 crore. Karnik suggests that hopefully, this small gap between print and digital will vanish in 2018 and that digital will take over print, this year.

Summarising it, Abraham said, “With the 2017 momentum and the economy also looking up and set to grow at 7.3% in 2018-19, sports is looking at an even bigger year. As the industry anticipates clarity on the structure of club football in India, among the new leagues on the horizon, volleyball seems the most promising. In the media firmament, while new revenue benchmarks are expected from television, it will be traction in the digital arena that provides real pointers to where the industry is going over the next few years.”