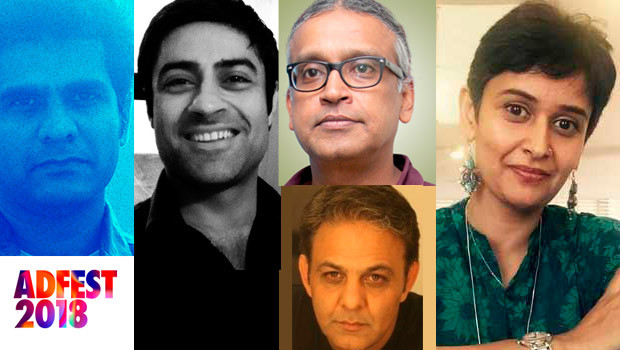 Five top Indian creatives will judge various categories at the Adfest 2018, which will be held from March 21-24 at the Peach Royal Cliff Hotels Group, Pattaya, Thailand.

Batra will be judging the Film & Lotus category. He joined McCann Delhi in 2005 and rose through the ranks to become Creative Head in 2016. During this journey, he, along with his team, has created several popular campaigns for Perfetti, Coca Cola, Domino’s Pizza as well as home-grown brands like Yatra.com, Paytm, Radio Mirchi, Greenlam and more. His work has won at Cannes, Clio, Adfest, Spikes Asia, One Show and at several national award shows like the Abbys, Effie’s.

Apart from being the jury president for the Outdoor Lotus and Press Lotus, Padhi is also the jury member for Innovation Lotus and Lotus Roots & Grande for Humanity. Padhi started his advertising career as an art graduate with DDB, followed by a 10-year stint at Leo Burnett, where he was an Executive Creative Director and the National Head of Art. Eight years ago he started his new creative venture, 'Taproot India' – now Taproot Dentsu.

Sharda would be a part of Interactive and Mobile Lotus jury. She has been a writer in advertising for the past 16 years. She has worked across agencies like DDB Mudra, McCann Erickson, Publicis India and she is now with BBDO India. Sharda has won numerous accolades for her work, the most recent one being #ReleaseThePressure on Mirinda.

Bagga will judge the category Film Craft Lotus and New Director Lotus. Veneet started his career in 1991 as a cinematographer covering high-risk news such as riots, terrorist camps and natural disasters for the only TV station in India at that time. He worked on award-winning shows for PBS Canada, Discovery Canada, Sony Entertainment, AXN, MTV, etc. directing and shooting extensively across Asia, Africa and Europe. Post that, he was signed to direct India’s first TVC that got India noticed as a direct foreign investment destination. The path-breaking TVC catapulted him into advertising. Thereon, he directed films for brands such as Hyundai, Haier, Maruti Suzuki, Whirlpool, etc. but kept his passion for documentaries alive working with the UN and WHO on subjects like female feticide and water conservation. Today Bagga is the Founder and Director of Onions Creative Media, an independent moving picture content company that ideates and produces content for some of the biggest brands and organisations in the world.

Pranav Harihar Sharma, ECD at Leo Burnett Mumbai, is one of the speakers at the Creative at Adfest program titled ‘Be Michael Corvin: A Hybrid’. The session will be presented by Sharma on March 23 at 4 pm. Michael Corvin is a character in the Hollywood ‘Underworld’ series of films, who inspires this session.

Tags: judge at Adfest 2018 Adfest 2018
Advertisment
More from this section