It allows users to buy a pass to watch a show/entire series for a fee of Rs 18, instead of paying a blanket price as subscription money 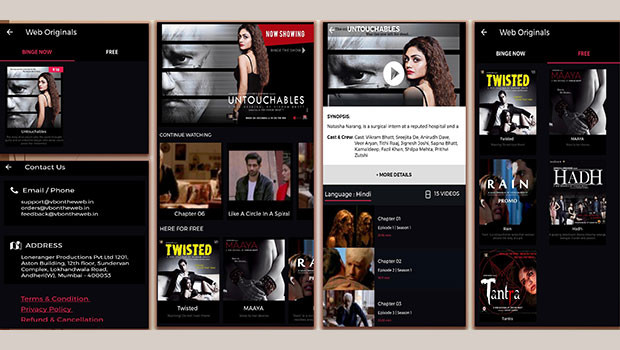 Director and writer Vikram Bhatt has announced his venture in the digital space with the launch of his OTT platform called VBontheweb, which brings forth a ‘theatre-on-the-web’ concept where one pays only for the show that one wishes to binge watch. The fremium OTT platform has two segments – Continue Watching (free content) and Now Showing (paid content). Under the paid content will be original shows that won’t be available anywhere else. As an OTT platform that promotes the concept of bringing cinema to the mobile phone with its transaction-based subscription model, it allows users to buy a pass to watch a show/ entire series for a fee of Rs 18, instead of paying a blanket price as subscription money.

These shows will be shifted to the free content segment, once the subscription coming from these series deplete. Currently, the shows available on the app for free include Maya, Twisted, Rain, Tantra and Hadh. These are Vikram’s older shows that he had floated on his YouTube channel – VBontheweb – in past one year.

Joining him at the launch was filmmaker Mahesh Bhatt who encouraged Vikram's foray in the online space. The app was launched on the platform hosted by Brightcove, one of the pioneers of online video streaming and has been developed by Ecreeds.

This is not the first time that the viewers would get to pay for particular shows only which they desire to watch and not the entire application. Sony Liv too tried this model with its movie content, though the company didn’t promote the ‘subscription model’ much. With this, Bhatt intends to bring about a substantial change in the digital space and give a choice to the viewers.

The app will also offer an opportunity for other filmmakers to put up their content on the app as a synergy to give them access to a platform where their content can be displayed. The app was launched with an original series, ‘Untouchables’, directed by Vikram’s daughter Krishna Bhatt. Untouchables is a courtroom drama inspired by real-life events. Vikram commented, “We are not leaving any stone unturned to making it big for VBontheweb app. Our digital venture premiered Untouchables, which is special to me because it my daughter Krishna’s directorial debut and it makes me feel extremely proud. Digital is the future and it has arrived, we are ready to seize the day.”

Speaking about the app launch, Krishna said, “Launching VBontheweb app is a big step we’re taking to capture the OTT platform. The series of programming also includes Untouchables, which is my directorial debut and has already received appreciation from the audience. I’m hoping this platform will become a digital sensation, and I am excited to see the progress.”

VBontheweb is currently available on Android and iOS platforms.