This is Disney’s second Broadway-style show after Beauty and The Beast. Aladdin has been running in its international format across other markets for the last four years 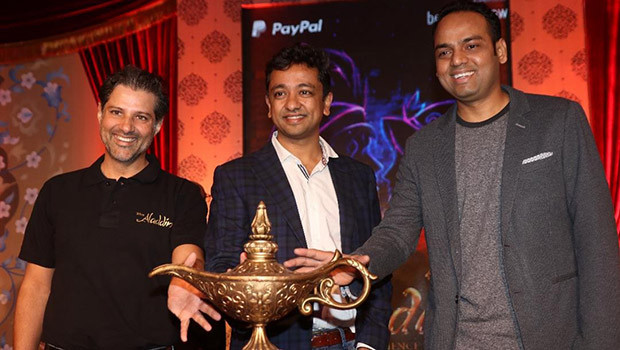 Disney and Bookmyshow have come together to bring Aladdin’s story in the Broadway musical style. The show is being produced by Bookmyshow and sponsored by PayPal. There are few other sponsors too on the show. Disney had, in 2015 and 2016, brought its first Broadway-style musical show to India when it launched Beauty and The Beast.

Aladdin is its second attempt in the format and will run in Delhi, Hyderabad and Mumbai. The Aladdin franchise is running in this format in the international markets for last four years and has been successful in many markets, including United States, United Kingdom, Australia and Japan.

On why he chose Aladdin, Abhishek Maheshwari, Country Head, Disney India, said, “We are spoilt for choices, but when we decided to look something for India, Aladdin was an obvious choice. It is a universal story. This is the story that kids here know and understand. If the audience knows the story, it makes the job a tiny bit easier. We felt that we could adapt and reimagine it for this audience.”

If it is a universal story, then why is therea need to reimagine? “The core story is the same, it is about how you present it. The sensitivities that appeal to the local audiences in the target market is what matters,” answered Maheshwari.

The Indian audiences are known to be not willing to pay for content. The live event is one format that does need heavy ticketing revenue in order to sustain itself. Speaking about the success of the previous show and whether the format is economically viable in India, Maheshwari added, “Beauty and the Beast was sold out on each show and that is a testimony for success. It was a risk of sorts, on both supply and demand side. We had to check the waters whether we can find the right kind of actors, technicians and the audience for this Broadway-style musical. We were surprised and excited on the outcome and we came back. Aladdin cuts across all agegroups.”

In the arrangement between Bookmyshow and Disney, the former is handling the whole event with respect to production, event management, sponsorship, ticketing and pricing. Disney has helped with the licensing of the character and the franchise. One of the learnings that helped the company is the supply side as a lot of cast and crew has got repeated in Aladdin.

India is still not a mature market in terms of live events. This is still comparatively a nascent stage for this stream of entertainment. Speaking more about it, VikranthPawar, Head, Live Entertainment and Local Content Studio, Disney India, said, “Theatre is very strong, which is a great opportunity. The country is ready to consume and produce such content with availability of talent in actors and technicians. Maturity has been achieved to a large extent. Mumbai, itself, has evolved as a very strong market for theatre. If you simply compare the number of ads for theatricals and live events from 15 years ago to now, it will tell you a story. Audience demand is increasing. People want to go beyond what they try on screen.”

According to Pawar, any city that has a sizeable and substantial English-speaking population and that enjoys English entertainment will enjoy Broadway-style musicals.

“The live entertainment standards in India are rapidly catching up with the rest of the world andBookMyShow is proud to have been continuously playing its part in this transformative journey. We are absolutely excited to produce the Indian stage version of Disney’s Aladdin, which will open its doors to the audiences in just a few months from now. It promises to be an extravagant visual feast, filled with music, joy and loads of theatrical magic,” said Ashish Hemrajani, CEO and Founder, BookMyShow.

The musical will premiere at Mumbai’s National Centre for the Performing Arts (NCPA) in April 2018. PayPal will be the preferred payments partner for the musical, allowing people to buy tickets through its secure payment system. The show will be priced at a minimum amount of Rs 750.

Hemrajani said, “We have been working with Disney in a long association that cuts across movies and other things. It culminated into something that we did last time with Beauty and The Beast. It was a natural progression for us. We just felt that this was the right time to see where our consumer preference is coming from. As market leaders, you have to ensure that the market grows and it has to grow on all sides. We thought of growing the pie and brought world-class entertainment to India and we believe that Indian audiences are discerning. We did a lot of data science and study the last time (Beauty and the Beast) to analyse the markets, price-point and type of audience. We have used the same data points, both qualitative and quantitative, this time too.”

Explaining the pricing, he added, “It’s been 20 years in making Bookmyshow and we know the convenient price point at which the market tends to enter. A lot of algorithm and science have gone in defining the start and end price-points. We are a data-driven company. The choice of markets, Mumbai and Delhi, were obvious. We will evaluate and take it to other markets. We chose Hyderabad this time since it has got the ability to pay; it has got consumers who have travelled and had experiences outside. That doesn't mean we will end up at these three, we will go as the show goes along.”

“Disney stories are timeless and have a special meaning for everyone in the family. Stories likeAladdin and Beauty and the Beast are universal and can engage fans everywhere. In India, we are committed to developing world-class entertainment that families can relate to and become a part of their everyday lives. We partnered with BookMyShow, given their deep understanding of the local audience and their quality of consumer engagement,” said Maheshwari.

The Indian production boasts of extravagant sets, lavish costumes, beautifully choreographed sequences, mesmerising special effects and the flying magic carpet, which will instantly transport the audiences into the magical world of Agrabah. Over 50 performers will weave the enchanting story on stage, taking the viewers on the fun-filled adventures of Aladdin and making this musical a unique experience.

AnupamPahuja, Managing Director, PayPal India, said, “We are proud to be associated withDisney’s Aladdin and BookMyShow. This iconic production promises to be an enchanting experience for everyone, and we look forward to making the experience even more enjoyable by providing an easy and safe way to purchase tickets online. PayPal is a global leader in digital payments and we are committed to offering a safer and more secure payment experience to Indian consumers domestically and globally.”