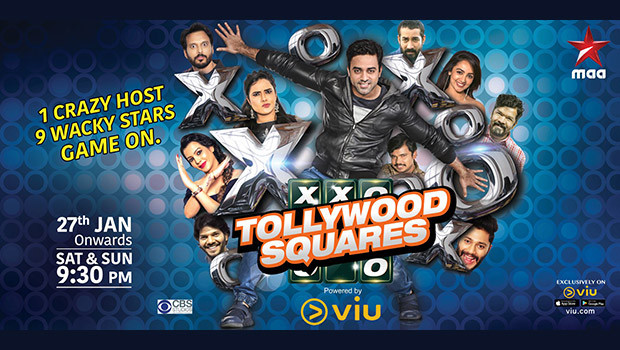 Viu, the video-on-demand OTT service by Vuclip, has partnered with Morris Street Advisors to co-produce the Indian adaptation of multiple Emmy award-winning and internationally successful CBS show format ‘Hollywood Squares’ in multiple languages. For the Telugu audience, the show has been titled as Tollywood Squares.

Apart from Morris Street Advisors, Viu has also joined hands with PCCW, Star Maa (Telugu GEC of Star India) and GroupM’s Motion Content Group, to bring the most successful global format Hollywood Squares to India. This collaboration will present the Indian version and this partnership will help deliver content cross-platform as the show will be available on a digital platform and a television channel simultaneously.

The show will be adapted in multiple languages and the Telugu version will be telecast on Star Maa. Morris Street Advisors, a boutique content leader, has acquired the format rights to Hollywood Squares from CBS Studios International for India and has partnered with Viu to produce localised version of the format.

Hollywood Squares is the first major game show format from CBS to be produced in India. Created in Telugu, the 26-episode weekend show will go live on January 27, 2018 on Star Maa and the Viu app and website simultaneously where one episode will release every Saturday and Sunday at 9.30 pm. Hosted by film actor and television personality Navdeep Pallapolu, the series will be based on tic-tac-toe, a universally popular game and will showcase nine new celebrities and two new contestants in each episode. Elaborating on the show and partnership, Vishal Maheshwari, Country head, Viu India, said, “We are thrilled to bring the most sought-after celebrity game show of Hollywood Squares regionalised for our Telugu audience. At Viu, our constant focus is to bring refreshing narratives and exciting new formats that appeal to the millennials. Our insights gave us the belief that a format like this, which is iconic in its own right globally, would be a timely new addition to our bouquet of differentiated content. We are happy to partner with Morris Street Advisors, GroupM’s Motion content group and our channel partner Star Maa to bring this internationally recognised show format for our audiences. This is an innovative content partnership the content can be viewed on the digital platform and main screen television.”

Alok Jain, Business Head, Star Maa, said, “We at Star Maa have always been at the forefront of pioneering new shows and bringing unique formats to entertain our viewers. We are known for bringing the best of its kind of shows from around the world and present it to our Telugu viewers in the regional flavour. In this regard, we are pleased to now bring 'Hollywood Squares', an international award-winning format first in India for the Telugu people. The show is an exciting version of our favourite childhood game "tic-tac-toe", adapted for television viewing with interesting celebrities in the nine squares of the game. I am confident that this show will take our viewers across all age groups back to the memory lanes and the concept of this show will transform the TV viewers’ experience. We are extremely pleased to partner with Viu and together this show will entertain our viewers.” Rohit Tiwari, CEO, Morris Street Advisors, who negotiated and closed the deal with CBS for the iconic series, said, “This is a milestone moment for Morris Street Advisors. As a leading provider of entertainment content, we are now placing more focus on producing popular programming that captivates Indian viewers. We are super excited to team up with CBS Studios International and our Indian partners to produce the show in India.”

Roxanne Lettman Pompa, Vice-President, International Sales and Production, ‎CBS Studios International, said, “Hollywood Squares has had success in many countries around the world, and we’re convinced it will appeal to viewers in India.”