This is his second stint as Jury President at Adfest. In 2013, he had headed Design Lotus and Print Craft Lotus jury 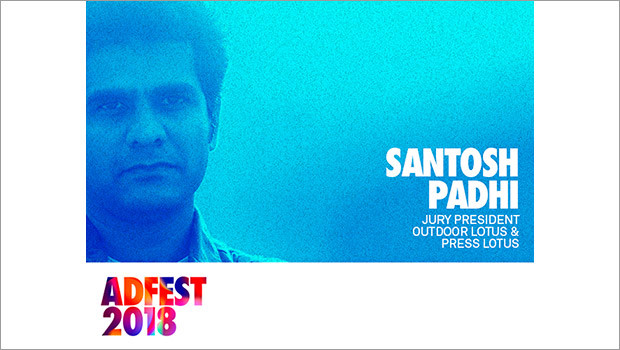 “It's always a privilege to be associated with Adfest, a festival I love more than most other shows. Nothing can get better than this – I'm a passionate print lover and to lead two of my favourite categories is a real pleasure. I'm delighted and looking forward to taking this opportunity forward,” said Padhi.

Popularly known as 'Paddy', Padhi started his advertising career as an art graduate with DDB, followed by a 10-year stint at Leo Burnett, where he was an Executive Creative Director and the National Head of Art. Eight years ago he started his new creative venture, 'Taproot India' – now Taproot Dentsu.

Today, Taproot Dentsu has risen to become one of India’s most prominent creative agencies, notching up several accolades along the way. In its very first year it was rated the No. 1 Independent Agency from India at Cannes and ranked amongst the Top 20 Independent Agencies in the World in the Cannes Survey. The agency was also declared the Best Performing Agency from India at Adfest 2010 with multiple Gold Lotuses to its credit.

“In recent years, I have seen Paddy collect so many trophies and achieve so many successes as the founder of Taproot Dentsu. It is truly an honour to welcome one of our favourite friends back to ADFEST to lead two categories that he has well and truly mastered,” said Jimmy Lam, Adfest President.

Taproot is behind one of the world’s most celebrated print campaigns for Conqueror Papers, and the brilliant “I’m Mumbai” TV Campaign for The Times of India. More recently, Paddy says he is most proud of the Adidas Odds campaign for Para-athletes, which is one of his most recent and awarded campaigns from India in 2017.

In fact, Taproot has notched up so many achievements, it’s impossible to list them all. In 2013, the agency topped the Gunn Report and was crowned "Creative Agency of the Year" at Adfest, making it the first-ever Indian agency to win this title. Meanwhile, Taproot has rated in the top three awarded agencies in India for the last eight years consecutively.

The 2018 Adfest Lotus Awards are open for entries until January 12 (remote categories only) and January 19 (other categories). Adfest 2018 runs from March 21-24, 2018 at the Peach Royal Cliff Hotels Group, Pattaya, Thailand.