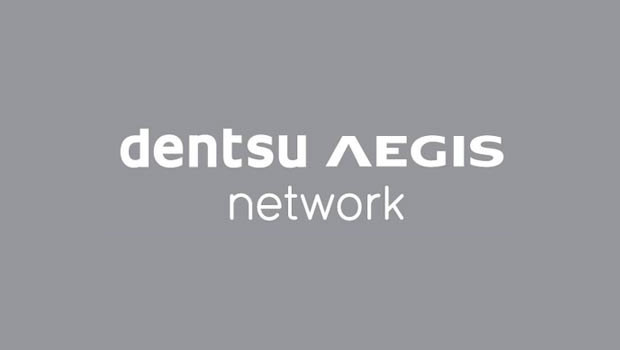 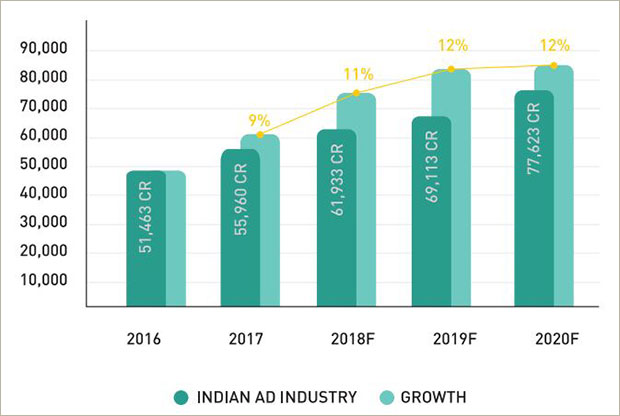 Television takes the largest share of these media spends at 40 per cent (Rs 22,526 crore), followed by print at 34 per cent (Rs 18,981 crore). In India, TV continues to be a key medium for both advertisers and broadcasters owing to the medium’s unmatched reach. Digital media contributes 15 per cent (Rs 8,202 crore) of the overall ad spends. 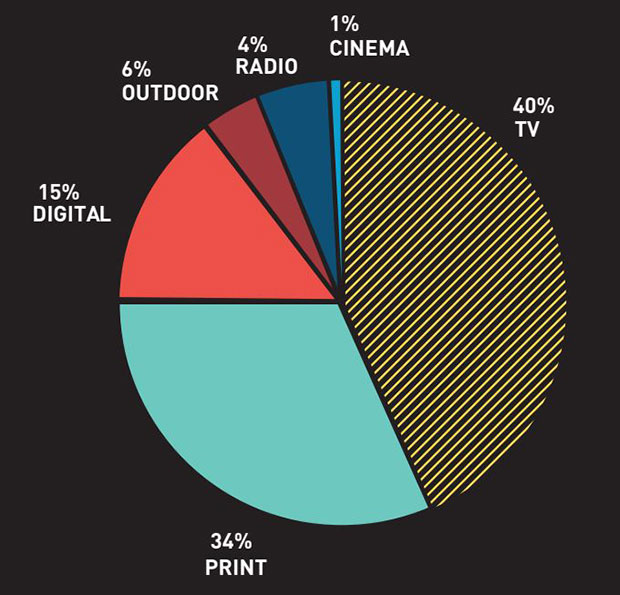 This scenario is most likely to change soon as digital expands by eating into the media spends on the other platforms. Advertisers are now adopting digital media as a branding medium, not merely a performance medium. It currently contributes 15 per cent to the total advertising industry in India and this is expected to reach 24 per cent of the entire market by 2020. 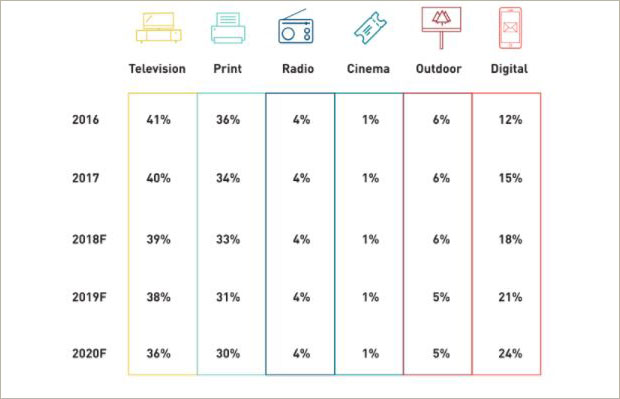 FMCG spends the highest on advertisements contributing 29 per cent (almost Rs 16,164 crore) to the overall ad spends. This is followed by the automotive (Rs 5,702 crore) and e-commerce sectors.

E-commerce, a high spender on high-decibel advertising, especially during the festive season,contributes up to nine per cent of the total ad pie. The ad spends has seen the highest increase in e-commerce (13 per cent) followed by BFSI (11 per cent).

Automotive and telecom sectors have seen 11 per cent increase in ad spends, respectively. The telecom sector could see further growth, driven by better smartphone penetration and service providers cutting down on prices. 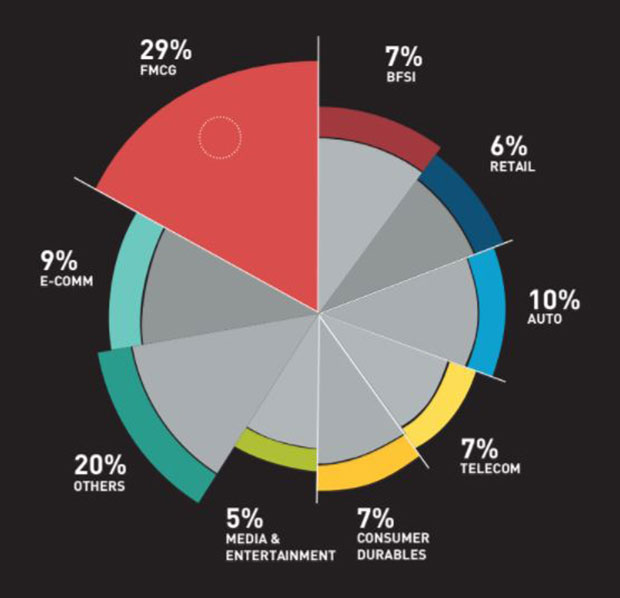 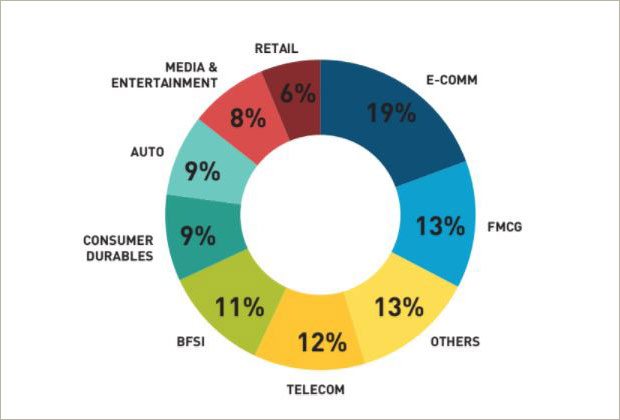 Interestingly enough, the DAN report takes a closer look at how much each of these categories weigh on the various media platforms. There aren’t many surprises for guessing that almost everyone spends the most on television, followed by print.

E-commerce spends the maximum on TV (37 per cent) closely followed by spends on digital (30 per cent). The Indian e-commerce industry has been on an upward growth trajectory and is expected to surpass the US to become the second largest e-commerce market in the world by 2034.

In terms of proportion of ad spends on digital, e-commerce spends the highest followed bytelecom, BFSI and media and entertainment. Backed by growth of the Indian e-commerce industry, the internet economy is expected to double from by 2020.

Spends on TV has seen the highest growth of ad spends from the automotive sector, followed bye-commerce and BFSI. With Free to Air (FTA) channels adding more inventory and high definition (HD) content gaining ground, television advertising is expected to grow at a CAGR of eight per cent till 2020.

The consolidation of niche channels will create fresh opportunities.

Spends on digital has seen the highest growth from the automotive sector followedby BFSI and e-commerce. With the consumer base being primarily youth and heavy internet users, the spends on digital media for these segments have seen a significant growth in the past few years. 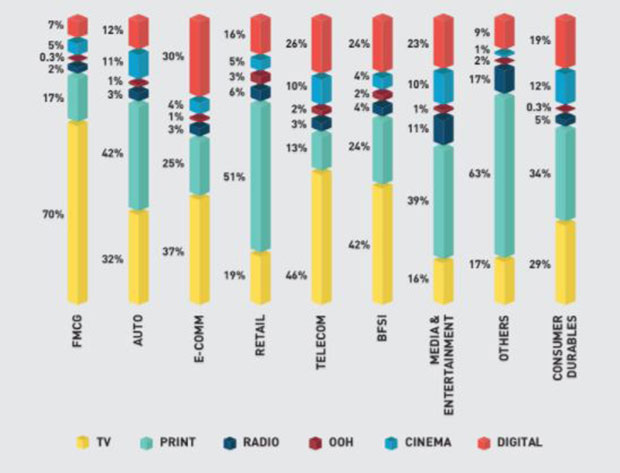 Within the digital media platform, there are many different formats of advertising – right from social media, search, display, classifieds and the most popular videos. Social media takes most of the digital ad spending with 28 per cent of all digital media spends (Rs 2,309 crore). This is followed by search at 26 per cent (Rs 2,128 crore) and display at 21 per cent (Rs 1,714 crore). Spends on video stands at 19 percent (Rs 1,598 crore) while that on classifieds stand at six percent (Rs 452 crore).

The automobile sector will witness further growth in the coming years thanks to the increased domestic demand because of the rising income and the younger population. This, in addition to the growing demand for commercial vehicles owing to the Government’s focus on electric vehicles and heightened infrastructure activity, will significantly increase the ad spends in this sector. 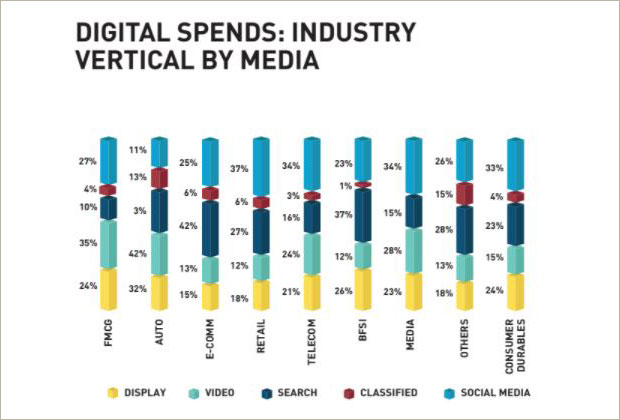 Lastly, the report also studies the divide between desktop and mobile phones. As of 2017, 43 percent of the digital media budget is spent on advertising on the mobile devices (Rs 3,491 crore). The rest is spent on desktops (57 percent). The spends of mobile is expected to grow at a CAGR of 49 per cent to reach Rs 11,392 crore by 2020 (60 per cent of the spends share). It will overtake spends on desktops by 2019. 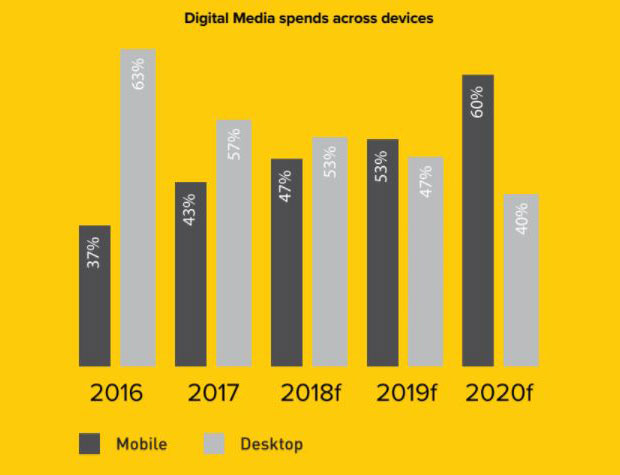 Tags: Indian Adex to grow by 11 per cent CAGR DAN Report
Advertisment
More from this section