Conceptualised by Lowe Lintas, the campaign – part of Swachh Aadat Swachh Bharat – aims to create awareness about three healthy habits, #HaathMunhBum, and give India not only a playing 11 but a ‘Playing Billion’ 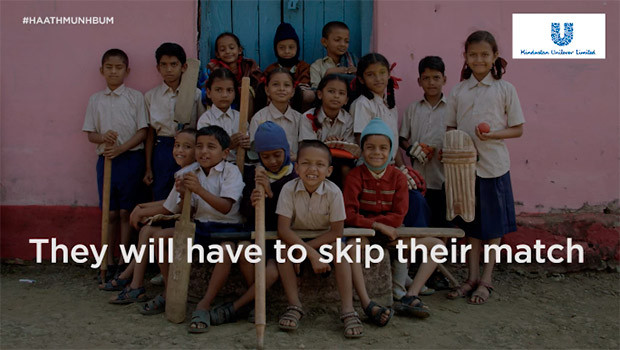 The campaign was launched by film actress Kajol Devgan, the newly appointed advocacy ambassador for the initiative.

One-third of India’s children fall ill repeatedly (based on independent studies and data sources relating to children aged 0-5), and this can be prevented by adopting basic hygiene habits like washing hands with soap, drinking clean water and using a clean toilet.

The TVC puts spotlight on the issue through a heart-breaking story of a group of kids who miss out on the simple joys of childhood due to repeated illness. The campaign aims to create awareness about the three ‘swachh aadats’, #HaathMunhBum.

Shot in Ramkulla, Madhya Pradesh, the film was conceptualised and produced by Lowe Lintas. It highlights how repeated illness is a deterrent in a child’s life. It shows children of this village who are determined to participate in a cricket tournament, which is a month away. The protagonist Lali puts all her efforts in forming the team of 11 players. The children are repeatedly falling ill during practice, but that does not crush their endless zeal. Lali’s struggles go futile when four players fall ill again on the D-day which disqualifies them from the tournament.

The children’s unstoppable spirit in the face of repeated illness signifies how poor sanitation and hygiene is robbing children of the simple joys of childhood – that of playing a cricket tournament. Through the campaign Swachh Aadat Swachh Bharat, it aims to teach children these three simple life-changing habits, and give India not only a playing 11 but a ‘Playing Billion’. Commenting on the campaign, Arun Iyer, Chairman & CCO, Lowe Lintas, said, “As a nation, the biggest victims of poor sanitation and unhygienic habits are children, and these often rob them of small and simple joys of childhood. In this campaign, with kids at the centre of our communication, we made an attempt to not only tap into the collective consciousness of the society but to also directly encourage children to adopt these life-saving habits. The narrative is further accentuated by weaving it around cricket. The Swachh Aadat initiative is close to our hearts, and I'm happy that it gave the brands (Lifebuoy, Domex and Pureit) an opportunity to be agents of behavioural change.”

The campaign has been launched both online and offline.

In addition, for the first time, five competing media houses came together as one to be part of this campaign. The Times of India, The Hindu, Hindustan Times, the Patrika Group and Lokmat partnered with Hindustan Unilever to further the message of the three Swachh Aadats.