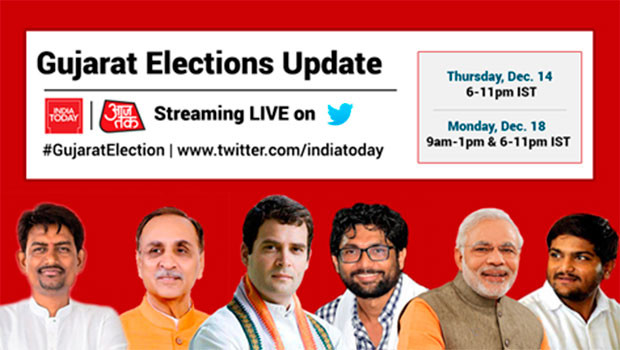 Click on the Image to watch The Live Stream

Elaborating on the new development, Amrita Tripathi, Acting Head for News Partnerships, Twitter India, said, “Twitter is where people come to see what’s happening in India and the world. We’re excited to launch the first live stream of elections in India together with India Today and Aaj Tak, providing people in India and around the world with the opportunity to follow all the election-related action in real-time, with the best analysis and commentary in the business.”

Commenting on the collaboration, Salil Kumar, Chief Operating Officer, India Today Group, Digital, said, “The election coverage of the India Today Group offers a great mix of capturing the action from the ground and insightful analysis from top experts. Streaming content live through Twitter gives it an additional reach and allows us to capture the real-time mood and sentiment of the people.”

The live stream is available for free to logged-in and logged-out users on Twitter and connected devices globally; and each stream will be accompanied by a Twitter timeline, featuring in real time Gujarat election-related conversation.

The live streaming of the Gujarat election on Twitter is developed in collaboration with India Today and Aaj Tak as part of Twitter’s continuous efforts in taking Digital India to newer heights.