The network was able to put its news channels - Times Now, Mirror Now and ET Now - back on air. The remaining channels are expected to go on air by noon today. TV9 Marathi office affected by same fire 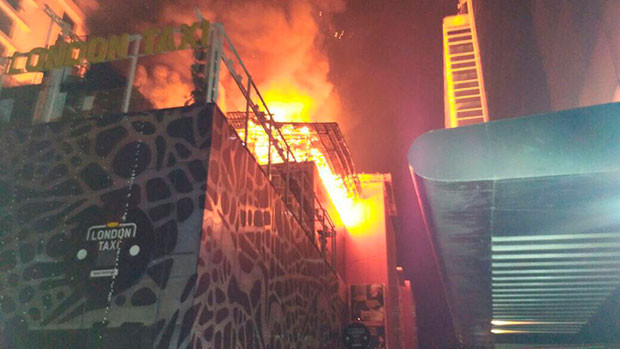 Times Network channels stopped transmission due to a fire that stuck its Lower Parel office in the wee hours of Friday. As a result, all the channels of the network were not transmitting initially, though the broadcaster was able to put up Times Now and Mirror Now in a matter of few hours and Times Now HD was also set right by 8.30am. However, the three news channels are running the same feed. ET Now too was up by the time of filing this report.

On the other hand, Movies Now, Movies Now HD, MNX HD, MN+ HD, MNX, Romedy Now, Romedy Now HD and Zoom are not transmitting due to major infrastructure losses. The channel also has a transmission set-up in its Noida office. As of morning, the message on these channels was ‘This channel is temporarily unavailable from the broadcaster due to technical failure. Service will resume shortly.’

At least 15 people were killed and 21 others hurt when a major fire broke out in a pub adjacent to Times Network office in the Kamla Mills Compound.

The blaze was reported around 12.30 a.m. from a bistro The Mojo, a rooftop restaurant pub in The Kamla Trade House and quickly spread to another surrounding pubs and offices of Times Network channels. MK Anand, MD and CEO, Times Network, said, “Our heartfelt condolences to those who have lost their near and dear ones last night. We have been extremely fortunate that no lives were lost from Times Network although the fire did affect our premises. We have been able to put our News channels back on air. We are trying to put the remaining channels on by noon.”

The exact spot where fire entered the Times Network’s office was till recently occupied by the main team of Times Now. In a major reshuffling three weeks ago, this team was shifted to the Delhi office.

The TV9 Marathi office is also located in the same premises and has been affected by the fire. At the time of filing of this report, the channel was up and running Live from the spot, though the transmissions were temporarily interrupted. The channel was giving live updates on its Twitter handle.