Guest Times: What IndiGo should have written in its apology letter

Karthik Srinivasan, National Lead, Social@Ogilvy analyses Indigo’s apology issued after the public backlash on airport manhandling incident. Srinivasan finds the apology insincere and shares his version of what Indigo should have actually written 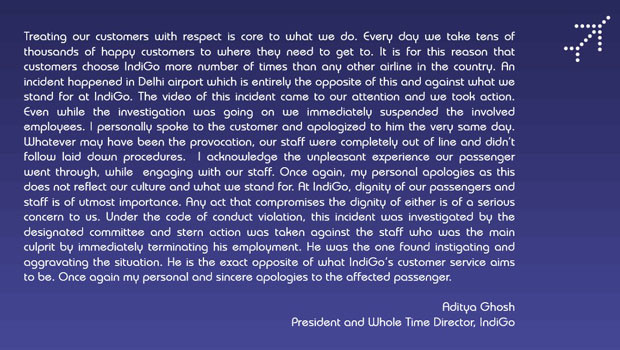 Treating our customers with respect is core to what we do.

This is a given. This is taken to be granted in the service industry. Why even start with this sentence as if someone had any doubt about this?

Every day we take tens of thousands of happy customers to where they need to get to. It is for this reason that customers choose IndiGo more number of times than any other airline in the country.

Why do a chest-thump when you are apologising? This is not a marketing opportunity.

An incident happened in Delhi airport which is entirely the opposite of this and against what we stand for at IndiGo. The video of this incident came to our attention and we took action.

Not really. A video of an incident where your staff was involved in a physical fight with a customer surfaced online after it was shown on news television. Spell it out, please. If you go by this Times Now story, this video was shot by your own ground staff and there was no action on it for over 15 days! And intriguingly, the ground staffer who shot the video and sent it to his superiors was sacked!

Even while the investigation was going on we immediately suspended the involved employees.

Why this manic rush? There is a statement to this effect four lines down anyway!

I personally spoke to the customer and apologised to him the very same day.

This is an assertive and useful sentence.

Whatever may have been the provocation, our staff were completely out of line and didn’t follow laid down procedures.

Why allude to the provocation? People will take sides and you have no meaningful way of gauging the public sentiment in terms of the side they are taking. The second part of the sentence is on target, though it ends with ‘laid down procedures’. Isn’t it more than that? Treating a customer well is not part of a manual. Physically assaulting him isn’t a manual-driven task either.

I acknowledge the unpleasant experience our passenger went through, while engaging with our staff.

Weak. This needs to come from the top and it has to be unequivocal. Aditya should be appalled, ideally, instead of treating it as an ‘unpleasant experience’

Once again, my personal apologies as this does not reflect our culture and what we stand for.

Why ‘once again’? Aditya apologised personally to the customer in an earlier sentence, remember? He hasn’t apologised to the broader set of other customers and readers yet.

At IndiGo, dignity of our passengers and staff is of utmost importance. Any act that compromises the dignity of either is of a serious concern to us.

I found this sentence vastly interesting. It seems to bridge last week’s PV Sindhu incident where the airline stood by the employee (bold; good stand!) and seems to be in some kind of an ambivalence in this case.

Under the code of conduct violation, this incident was investigated by the designated committee and stern action was taken against the staff who was the main culprit by immediately terminating his employment. He was the one found instigating and aggravating the situation.

This is the crux of the apology. The money-shot moment that other customers, current and prospective are looking for.

He is the exact opposite of what IndiGo’s customer service aims to be. Once again my personal and sincere apologies to the affected passenger.

Poor ending. It isolates the problem to one rogue employee and makes it look like he was merely not following laid-down rules on how not to physically assault customers and for that reason he was suspended.

What is the single-minded objective of an apology after an incident like this? Is it to just say sorry? No. In my opinion, it is to ensure that we take small steps towards gaining the customers’ trust again. That involves a sincere, appropriately worded apology *and* showcasing proof points that indicate that such incidents won’t recur again, particularly on the back of last week’s PV Sindhu episode where there was a similar allegation.

Here’s a possible alternative: (I’m assuming IndiGo has obviously investigated this issue and found conclusive evidence that their ground-staff was responsible. If the customer was equally responsible, that doesn’t come across in this apology. If that were the case, by any chance, the entire apology would need to be thought through very, very differently)

A video of an incident where our staff was involved in a physical fight with a customer surfaced online recently. We investigated the video, shot by one of our ground staff and forwarded to his seniors 15 days ago, and spoke to the people concerned, including all the ground staff involved and the customer. Our investigation revealed that one of our ground staff was at fault, significantly overstepping our code of conduct with customers and going beyond, physically assaulting the customer in the ensuing melee.

This is completely unacceptable at IndiGo and I’m appalled at the way we behaved during this incident. Starting now, I’m setting up a high-level core group to explore how and why this lapse happened. Moreover, I’m equally appalled at the delay in escalating and investigating this incident for over 15 days since it was first raised. I promise to share with you remedial steps we will, at IndiGo, take to ensure that such incidents do not happen and our customers are not put in such situations again.

This behaviour is absolutely not what we as a brand stand for. We did not treat a customer the way we promised to. I have personally spoken to the customer and apologised to him. As a normal customer of any airline, I’d be deeply upset watching such a video too. So, I also apologise to others who have watched this video and are disappointed with the way we have behaved, both in the video and in the backdrop, not taking any action for 15 days till it reached the media. We will set this right at an institutional level to ensure this does not happen again at IndiGo. That’s my promise to you.

(Karthik Srinivasan is a communications professional with over 17 years of experience across client and agency environments, having led PR, digital and social media mandates. He currently heads the social media practice at Ogilvy & Mather India. An avid blogger, Karthik manages two music-related blogs (http://www.itwofs.com and http://www.milliblog.com) and a third one, on the intersection of PR, marketing and all things social+digital, http://www.beastoftraal.com.)