Conceptualised by Ogilvy India, the ad is testimony to how a cup of tea can become a carrier of memories that transport you back in time 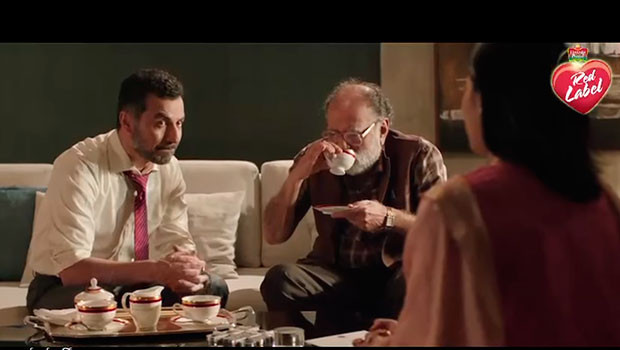 In its latest campaign, extending the ‘Swad apnepan ka’ proposition, Red Label Tea has brought in another facet of a cup of tea. The campaign conceptualised by Ogilvy India is testimony to how a cup of tea can also become the carrier of memories and facilitate a trip down the memory lane.

The ad film starts with a woman opening the door. She tells her husband who is just home from work that somebody has come to meet him. The man, on seeing the visitor, instantly recognises him to be his professor from college. When the wife asks the house help to make some tea for the professor, the husband volunteers to make tea himself. As all three sit down to savour the tea and they reminisce about the years gone by.

Calling the campaign a tale of togetherness, relationships and respect, Kainaz Karmakar, Chief Creative Officer, Ogilvy West, said, “When we write for Red Label Tea, we try to keep it simple, honest and warm, just like a cup of tea. This story is relevant to our times when it is so easy to forget the people who helped us reach where we are. It is a tale of relationships, respect and togetherness that unfolds over tea and because of tea.”

Speaking about the challenge of bringing different narratives based on a single brief, Abhik Santara, Executive Vice-President, Ogilvy Mumbai, said, “Tea is a social glue and it is the simple human connection that Red Label strives to strengthen through its communication. The brief remains the same, and that I am sure makes it challenging for Harshad (Rajadhyaksha) and Kainaz to come up with different yet relevant stories every time. But if you look at the journey of the brand, the stories are varying from different aspects of social tensions– yet none of them can be misattributed to any other brand. Consistent freshness in every execution is what makes Red Label one of the most creatively enriching brands. And we are glad to have a client who always encourages us in this journey.”