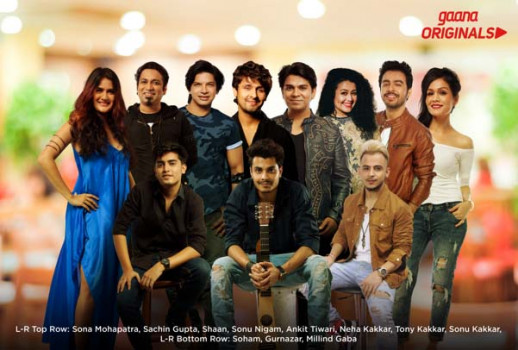 ‘Gaana Originals’, a platform to promote non-film music, which was launched last month seems to have hit the high notes with Gaana consumers as the first 6 songs have crossed 20 million streams on the Gaana platform in just 5 weeks. With the success of Gaana Originals, Gaana has crossed another milestone of 40 million monthly active customers in Sep’17.

Out of the first 6 songs, ‘Tum hardafa ho’ by Ankit Tiwari and ‘Aaja Meri bike Pe’ by Tony Kakkar have crossed more than 4.5 million streams each. Promptly followed by Millind Gaba ‘Main teri ho gayi’ with 3.5 million & ‘The Ankahee Project’ by Sona Mohpatra that has witnessed 3 million playouts. The latest songs ‘Camrye Waleya’ by Neha Kakkar with 2 million & ‘Bas Ek Baar’ by Sachin Gupta with 1 million streams are gradually gaining popularity on the platform.

Ankit Tiwari’s Tum Hardafa Ho has already made it to Mirchi Top 20 and various other industry top charts across radio stations and TV music channels. In the next 6 weeks, 6 more songs will be released under Gaana Originals including songs from legendary singing sensations like Sonu Nigam and Shaan.

Prashan Agarwal, COO, Gaana said, “this is an initiative to empower artists who can showcase and exercise their freedom & creativity without having to worry about the boundaries defined by limited film releases. 20 million streams in just 5 weeks is the biggest appreciation of this initiative from our customers, as most of these songs have grown better than few of the top Bollywood hits.”