Focus on the unpredictable, irrational and chaotic customer on Designyatra day 2

Dentsu Inc. Japan’s Noriyaki Onoe spoke about how digital has ushered in a new set of consumers and how one can reach out to them 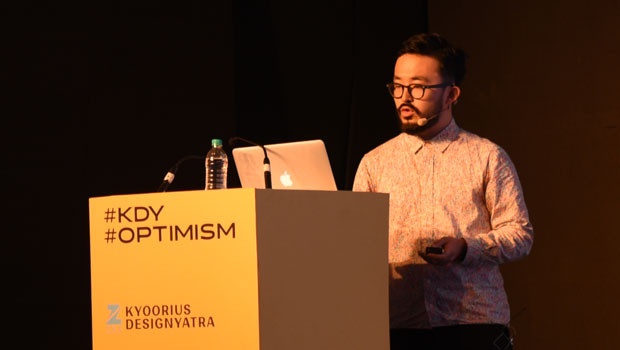 Digital has ushered in a lot of changes in our lives. Everything from how we consume information to how we interact with each other has seen a drastic change with the advent of technology. The internet has also changed us as consumers. Brands today are trying to figure how to reach out those who have no dearth of options and Noriyaki Onoe’s session on the second day of Designyatra could shed some light on that very topic.

Onoe, who started out at Dentsu as a Digital Producer, later switched to copywriting and currently holds the position of Creative Director at Dentsu Inc. Japan. Speaking about the campaigns he has done in Japan, Onoe laid out some pointers on how to capture the unpredictable, irrational and chaotic customer or the UIC customer.

We all realise that much of advertising is make-believe. So, when a brand comes up with something real it is bound to strike a chord. In Japan, authenticity is celebrated and when working on a pasta brand, Onoe and his team decided to give a spin to the whole authenticity thing. Instead of saying that the pasta was exactly like pasta from Italy, the campaign instead said “Pasta not approved by Italians”. The team flew down to Italy and got some Italians to give their verdict on the pasta and a majority of them said that it wasn’t like pasta at all. Onoe and his team went ahead with this campaign and soon the video went viral and everyone wanted to taste the pasta and figure out for themselves how the pasta tasted. The campaign was a massive success and all because they stuck to the truth.

In today’s digital world, it is important to make content that is shareable. People like stories and they like to share stories. A pasta brand that was not approved by Italians is a great story and people wanted to share it thus, making the content viral and increasing the popularity of the brand.

Unlike the good old days, where brands spoke to their customers from a distance, today is it imperative to engage customers and give them the chance to be a part of the narrative too. The “pasta not approved by Italians” campaign paved the way for the consumers themselves to be a part of the narrative by actually tasting the pasta and putting up YouTube videos of their verdict.

Donbei is an instant noodle brand in Japan and like all instant noodle brands, the instructions are to add hot water and leave it for five minutes before eating. But Onoe found a tweet that said that 10-minute Donbei was better than 5-minute Donbei. He tried it himself and realised that it was true. So, the company decided to issue an apology to the public for not realising this earlier. The apology, again, went viral, with people wanting to taste the difference between the 5-minute and the 10-minute Donbei. This happened because the brand took a tweet seriously and valued the customer’s inputs.

People are more likely to like and share content if they feel like they have discovered it. Proving this point is another campaign that Onoe and his team did for Donbei. Donbei had a restaurant at a railway station which was going to shut because the station was going into renovation. In Japan, when any place shuts down, the owners usually put up a letter addressed to the customers. In this case, Onoe and his team decided to take a different take on the letter. Basically, all the owner of the restaurant had to do was pour hot water on the instant noodles. So, a letter was written and all it said was how sad the owner was that he had to let go of such a non-demanding job. The letter, placed in an unusual spot on the wall, was spotted by a customer and the letter went viral.