The show was telecast on Colors Kannada in Season 3 and 4 and has now moved to the sister channel. This is the first season with commoners in the regional version. Kiccha Sudeep is hosting for the fifth season in a row 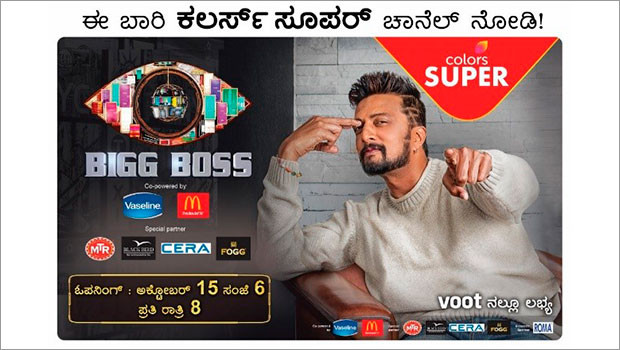 Bigg Boss Kannada has returned to Colors Super, the second GEC of Viacom18, in its fifth season. Hosted by actor Kiccha Sudeep, the show started on October 15 at 6pm and the subsequent episodes will be telecast at 8pm, every day. This season will see housemates from two distinct universes come together under one roof, when the ordinary lives of the ‘common man’ meet the glamorous lives of celebrities. Steering this unpredictable and turbulent journey, host Sudeep has come back to the show for the fourth time.

The show was launched in 2013 on ETV Kannada, hosted by Sudeep. The show moved to Asianet Suvarna for season 2 and came back to Colors Kannada (renewed ETV Kannada) for the third season. In Season 5, the show shifted to Colors Super.

Ravish Kumar, Head, Regional Entertainment, Viacom18, said, “While Colors Kannada has positioned itself as the market leader, it’s time that we fortified the strength of Colors Super, and what better way to do that than through Bigg Boss. We feel the strategy will benefit Colors Super immensely and take it to its next level. The new aspects introduced in the show will make for an interesting watch for the viewers, and hearten the business prospect for brands that associate with our channels.”

Talking about the show Sudeep said, “Bigg Boss Kannada manages to surprise me every season with the innovations in the concept and introduction of numerous entertainment avenues, not only for the housemates and viewers of the show but also for myself. The inclusion of the common man in the house revolutionises the format of the game, with even more unpredictability. I am delighted to have been a part of this journey from the onset. For the fifth season in a row, I am still as excited as I was in the first, with season 5 getting bigger, better and even more entertaining for everyone.”

Parameshwar Gundkal, Business Head, Colors Kannada and Colors Super, as well as director of the show added, “Season 5 of Bigg Boss has infused elements of unpredictably into every aspect of the show. This season of Bigg Boss Kannada is being aired on the fastest growing Kannada GEC, Colors Super. And we will witness a volatile mix of commoners and celebrities compete for the attention of Bigg Boss and viewers’ support.”

The Hindi version of the show involved the common man in its 10th season in 2016.

Abhishek Rege, COO TV and Films, Endemol Shine India, said, “As we embark on the fifth season, we have planned something special for the viewers. This season promises to be more captivating. Bigg Boss Kannada 5 will have a variety of new twists and surprises that will keep viewers hooked on to their TV sets.”