Women yet to break glass ceiling in advertising, marketing and media industry 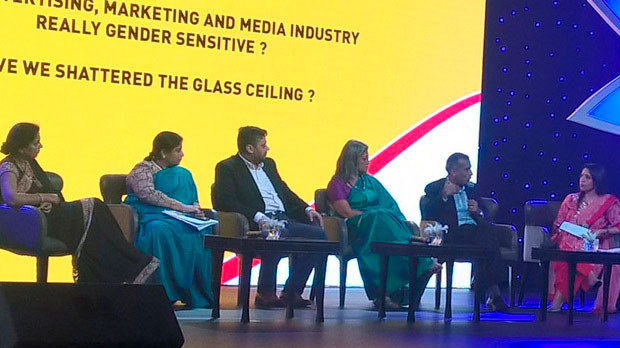 The Indian chapter of the International Advertising Association, on the occasion of the third IndIAA Awards, held a conversation where industry leaders discussed the issue of gender inclusiveness and sensitivity and debated whether the advertising, media and marketing industry has managed to break the glass ceiling when it comes to women members of the work force.

Nandini Dias, CEO, Loadstar UM, began by saying that even though women make up half of the world’s population, their contribution to economic activity and growth is far below their potential. She proceeded to give some statistics about the representation of women in various industries such as law, Indian administrative services and the media industry.

“A study by the Indian Federation Journalists in the year 2015 showed that the beats are gendered and that there is a marked gender disparity with only 10-25 per cent representation of women in the top management. While we all agree that when women do better everyone else does better, somehow the statistics do not add up,” said Dias.

She then invited Dr A L Sharada, Director Population First, to share some facts and figures from a recent research done by them on the issue of gender inclusiveness and sensitivity.

Sharada talked about their study that they conducted along with KC College where they covered 36 media organisations. Broadcast channels and newspapers formed the bulk of the sample size.

“The results of the research are nothing different from the statistics shared earlier by Nandini. Though it is true that women are represented more in the media industry but they do not seem to have the kind of opportunities required to move ahead in the hierarchy,” said Sharada.

Sharada highlighted some troubling observations like how the marginalised and oppressed segments of the society like the third gender and the backward classes are adequately represented and how there was no uniform policy with regards to maternity and paternity leave. Sharada also threw some light on how despite laws being in place, workplace harassment is still something women have to go through.

The address by Sharada was followed by the panel discussion. Tata, who was moderating the session, started the panel discussion by asking Vats whether he had seen any dramatic shift in gender inclusivity and what was Viacom’s contribution to that effect.

While Vats of Viacom18 agreed that there has been a definite change in the situation he also accepted that the pace of the shift could have been faster.

“As far as Viacom 18 is considered we as an organisation are committed to this cause. At the entry level we have 44 per cent women. At the top level we are at 27 per cent. We are moving the needle and I agree that we need to move it faster but we don’t want it to be about men and woman but about capability,” said Vats.

Vats elaborated how Viacom18 has a zero tolerance policy against sexual harassment and how they provide a crèche service too.

While Vats spoke about how they provide nine months maternity leave and a work-from-home option to make the transition much smoother for new mothers, Menon was of the opinion that maternity leave breeds resentment among men.

“I think the six-month maternity leave is the worst thing that could have happened to women in the Indian context. Six months maternity leave means that a woman is not productive in that organisation for half a year. I think it pushes back women, particularly in smaller organisations. I think there should be equality. If you are giving your women six months of maternity leave maybe you should give men at least half of that time as paternity leave,” said Menon of Spatial Access.

Menon was also of the view that the reason behind the low number of women in the top management level is because women at the top don’t mentor the women below them.

Speaking about a few trends that she has seen emerging, Shalini Kamat said, “The first thing that I noticed is that the pace is there, the change is happening but it is slow. A recent study says that at the rate things are going it will take 100 years if there is to be gender parity across the globe. The second trend I am seeing is that is with people opting to have only two children and with many having two daughters, I am seeing that such men are taking the cause of women now. The third trend I am seeing is not very positive. Women who reach a certain level are not able to transcend from that level because after fighting the system for such a long period of time, they lose the teeth to fight more.”

Kamat also talked a most disturbing trend where it is seen that millennial men do not want their partners to work but rather stay at home and involve themselves in child-rearing.

Suri of GroupM spoke about how it was difficult to find talent at the entry level. He attributed this to the education system and how there weren’t enough female candidates. Gulati of UNFPA India threw light on the problems women face at the grassroots level and how it is different and far more complicated than what women face in other parts of the world.

The session concluded with all parties agreeing that while change is happening, it is not happening fast enough. There is still a long way to go before we can claim women have been able to break the glass ceiling.