A mechanical engineer by qualification, Aniket Choudhary has had no professional training in designing. Today, he is the Creative Head at The Glitch and leading a team of 13 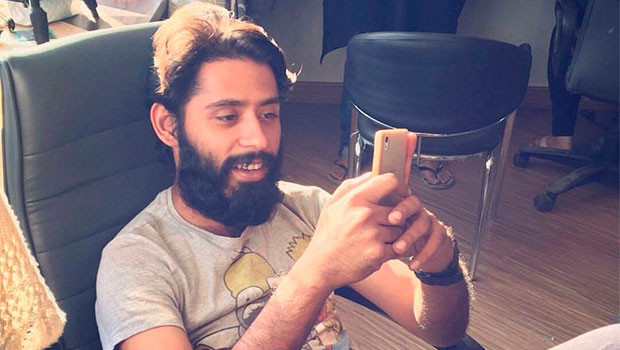 An alumnus of the University of Jammu, Aniket Choudhary is a mechanical engineer by qualification but his heart wasn’t in it.

“My parents wanted me to be an engineer and so I did my mechanical engineering from the University of Jammu. After my course, I came to Delhi looking for a job.”

A painter in his spare time, Choudhary used to make oil paintings during his college years. It was a friend’s message on Facebook that led him to the world of advertising.

“While I was looking for a job, a friend on Facebook told me that there was an opening for a creative artist at Salt Mango Tree, which is now The Links.”

Without any formal training in advertising or even as an artist, Choudhary decided to try his luck and went for the interview. As his portfolio he carried his various oil paintings. Impressed by his work, Choudhary was asked to join the organisation and that was his first step into advertising.

After a few months at Salt Mango Tree, Choudhary moved to Cresta Communications.

“Cresta Communications was headed by Debashis Bose and that is the place where I really learned all about advertising. We were a very small team there and Debashis ensured that everyone learned everything. Despite being a designer, I learned strategy and planning. It was there that I realised that I was made for this job.”

After spending one-and-a-half years at Cresta Communications, Choudhary moved on to LG. From there he joined The Glitch and three years later, today he is the Creative Head at its Delhi office and leads a team of 13.

Speaking about his experience working for The Glitch, Choudhary, said, “When I joined Glitch, they were very new in Delhi. I was actually the second designer they hired here. My first campaign for Glitch was the Mentos ‘Farak Padega’ campaign and from there, there was no looking back. The best part about The Glitch is the culture and the people. The people here are so talented and the culture is so good that my experience of working here is vastly different from working anywhere else and the creative liberty that you get here I don’t think people get anywhere else.”

According to Choudhary, the work that they did for Happydent was the project he had most fun working for.

“Happydent has already made its mark when it comes to advertising. So we got thinking what we could do for this brand next on digital. Our goal was how we could consistently leverage the brand and communication so that we can stay relevant to our TG. We completely revamped their content marketing and our efforts paid off. The brand recall of Happydent really went up within a month of the campaign,” he said.

One project that Choudhary found very challenging was the one they did for Women’s Horlicks, called ‘Strong to the bone’.

Choudhary believes that his biggest strength is the fact that he is not restricted to the execution bit of an idea.

“Designers come at the very end of the production chain. They come into the picture only when the execution part comes up but for me due to my experience when I design something, I am not thinking only as a designer. I haven’t learned designing, what I have learned is advertising and that is my forte. So, for me it is not just about the end product but about the idea itself.”

Talking about what he likes about his profession, Choudhary said, “Advertising has to be revolutionary. If you want people to do something you have to connect with them. For me, every day here is a new day. Every day, there is something interesting and exciting to do and I look forward to that.”

When not working, Choudhary dabbles a little in photography and cooking.

So, if not adverting what would he be doing?