An all-encompassing capsule, the content created will be a healthy mix of local happenings and music, refreshed every fortnight 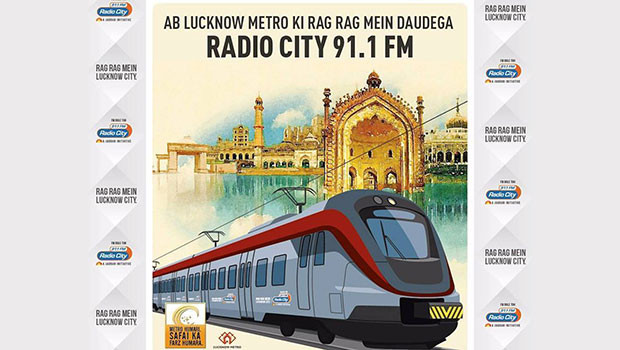 Giving a new dimension to travel entertainment, Radio City 91.1 FM has partnered with LMRC (Lucknow Metro Rail Corporation) to offer specialized content across all Lucknow Metro stations. Inaugurated by the Union Home Minister Rajnath Singh and the Chief Minister of U.P., Yogi Aditya Nath, the Lucknow Metro will make commute easier and trendier for Lucknowites, while Radio City will offer foot tapping and melodious music to make the wait for metro trains entertaining.

Radio City will create customized content packages during peak and off-peak hours respectively which comprises of songs, jingles and a special trivia from ‘City ke Kone Kone Se’ to integrate Radio City’s ideology of ‘Rag Rag Mein Daude City’. A TOH jingle has been specially composed and produced in house for Radio City LMRC that will be integrated on an hourly basis. In tandem with Radio City’s terrestrial music strategy of offering mood-mapped music, the playlist will be topical and in sync with the city’s listener’s preferences. An all-encompassing capsule, the content created will be a healthy mix of local happenings and music, refreshed every fortnight.

Commenting on the partnership, Abraham Thomas, CEO, Radio City 91.1 FM, said, “Radio City has ruled the airwaves in Lucknow for 16 years and through this partnership we are excited to present the city with a new entertainment destination. Since its inception, Radio City has always been a pioneer in launching path breaking initiatives and Radio City LMRC is a testimony that reflects our leadership stance.”

At the launch of Lucknow Metro, Radio City surprised Lucknowites with a special message from actor and singer, Farhan Akhtar, on air during their first metro ride in the city. While promoting his upcoming film Lucknow Central, Akhtar said, “I congratulate Radio City and LMRC for this association. This is a one of its kind experience for the citizens of Lucknow and a landmark moment in itself. Music and travel go hand in hand I believe every metro rider will enjoy the interim journey to the fullest.”

To kick off proceedings in style on the first day of metro for commuters, Radio City installed a studio set-up at Char Bagh metro station where Radio City RJs will broadcast their shows live. In addition to this, Radio City has also created selfie zones across all 8 metro stations where commuters can click selfies and post it on their social media pages tagging Radio City and stand a chance to win a free monthly pass of Lucknow Metro.