The first ad film conceptualised by Taproot Dentsu has ‘Apnapan’ as the umbrella theme, and brings to life the underlying emotional connect between Uber, its riders and driver partners by reinforcing that it’s a service one can rely on with the tagline ‘Isey apni hi gaadi samjho’ 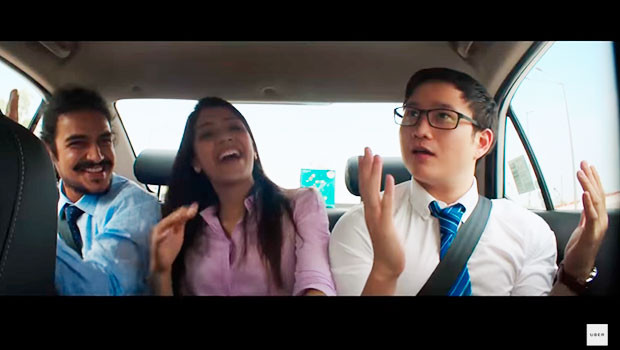 Uber has been functioning in India for more than four years but it never advertised on television before. It is for the first time that the brand has launched a national campaign reinforcing that Uber is every day, for everyone. The campaign conceptualised by Taproot Dentsu aims to build a deeper brand connect. Inspired by real rider and driver partner stories, the simple narrative highlights experiences that every Uber rider can relate to.

With ‘Apnapan’ being the umbrella theme, it brings to life the underlying emotional connect between Uber, its riders and driver partners by reinforcing that it’s a service one can rely as their own – true to the tagline ‘Isey apni hi gaadi samjho’.

BestMediaInfo.com met with Uber India’s recently appointed Head of Marketing Sanjay Gupta to know the marketing insight behind the campaign. Gupta has joined Uber from Urban Ladder and before that had worked with Marico and Accenture. Explaining the reason for advertising on television after spending four years in India, Gupta said, “Initially, Uber in India grew on the back of word of mouth. Since the product’s market fit was really good, the brand and category grew from 25 cities to neighbouring cities like Kuala Lumpur. Both our riders and driver partners are increasing in numbers and now we feel that TV is an essential medium. Also, the storytelling on television is quite powerful. Therefore, at this stage of our business, it makes sense for us to do a TVC.”

The ad film shows various incidences where different services of Uber are shown. For example, Uber Go, Uber X and Uber Pool. The first Uber driver is shown picking up a rich granny from her home, the next is picking up another man from the airport. The film also shows that Uber cab drivers are empathetic towards its riders. For instance, one of the cab drivers lowered the music when a lady was sleeping at the back seat. In another instance, the cab driver drove very carefully when he had a pregnant woman in the car. The TVC shows people of all age group as drivers as well as riders.

When asked why Uber decided to show different services in one single ad instead of different ads individually promoting each service, Gupta said, “This is the first time our riders and driver partners will see Uber on the mass media platform. It is important to establish brand Uber first on this medium and then we will talk about the fact that it replaces your own car and it can take you from point to point in a very reliable manner, almost like your own car. After that we will start looking at our individual product category – Uber pool, UberX and UberGo.”

Speaking about the campaign, Pallavi Chakravarti, Executive Creative Director, Taproot Dentsu, said, "Being a regular Uber user, I can vouch for the fact that it’s changed my life. It’s rare to work on a campaign where the idea is true to the brand and the service, where you don’t have to create a story because the real thing ‘is’ the story. The Uber experience is as good as having your own car, and sometimes even better. And this experience is something we think everyone should enjoy. So we’ve attempted to capture the Uber way of life through a simple thought around Apnapan."

Also talking about the campaign brief, Gupta said, “One line brief was to make Uber every day for everyone and we did a lot of work with our riders and partners. We got the response that people see Uber just like their own car. There is a sense of ‘apnaapan’. Luckily, people from our creative agency are Uber riders themselves and hence, they knew the feeling of apnapan.”

The campaign has two insights. Elaborating both, Gupta said that the first one is the category insight – people really need a more safe, reliable and convenient mode of transport every day. There are very few options available outside. The scale at which Uber is used is purely huge, because the product market set is really small. The second insight is the behaviour insight that taxi conceptually has i.e. for special occasions like airport. I won’t take a taxi for grocery shopping or to work daily. The behavioural insight was if you consider it as your own, like your own house or car then the sense of indulgence decreases significantly. You will then take the car to the market, to work and to all the places and it can become an everyday thing.

Uber also partnered with Madison to execute the media strategy. A multi-platform campaign, Uber’s digital-first approach will see Facebook and Youtube as primary channels, television for broader air cover and radio to communicate with the commuting audience. Given the scale and geographic footprint that the business has achieved, the TVC and radio campaigns will be available in multiple languages like Hindi, Marathi, Bengali, Kannada, Tamil and Telugu.

Vikram Sakhuja, CEO, Madison, added, "With the launch of this campaign, we expect more people to connect and use the convenience provided by Uber in the Indian context –  just like it is being appreciated and used by people in various countries across the world."

Some of the campaigns done by the brand previously was when Uber completed two years in India and to mark the journey the brand came out with the digital campaign ‘Uber moves Mumbai’. Going forward, it also launched several other ad films on the digital medium itself, which were conceptualised by BBH India. Links to a few of them are: