While other brands of the category have roped in celebrities as brand ambassadors, Nippon has used Blobbies, animated characters, to promote its products. The latest campaign has been conceptualised by Rubecon 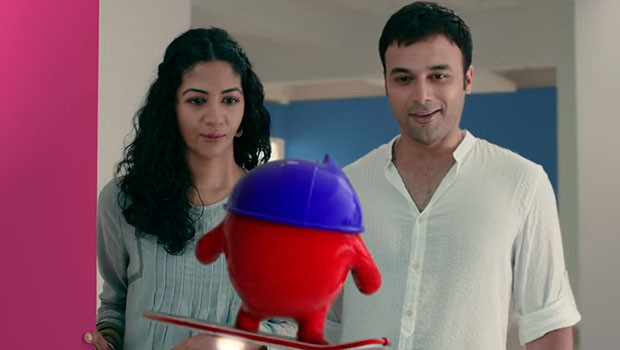 Using celebrities in ads is not at all a new idea in marketing but not all brands subscribe to this celebrity endorsement theory. People idolise celebrities in one way or the other and when famous people are seen in advertisements, the audience is prompted to buy the product they endorse.

Celebrity endorsement is also widely seen in the paint category. But seeking to break the clutter, Nippon Paint, a Japanese paint manufacturer, has chosen something else. It has rolled out another campaign featuring its brand ambassador, the animated character, Blobby.

Blobby is Nippon Paint’s cheerful tiny ball-shaped character that explains the benefits of its eco-friendly products to the audience.

Conceptualised by Rubecon, the ad opens with a young couple opening their house where they see different Blobbies. The video shows the Blobbies colouring the house beautifully and when they are questioned about anything, they just reply ‘Nippon’.

Speaking about the idea behind the concept of featuring Blobbies, Bharath M Raja, AGM, Marketing, Nippon Paint, Decorative Business, said, “The whole idea of using Blobby is to stand out amid the clutter and be unique in our own way. Blobbies have that potential to go and get a special place in consumer’s mind. We as a young brand don’t want to prove about what others are doing instead we want to be different and unique. Blobby is essence of our communication which we always wanted to communicate.”

Sajan Pratap Singh, VP, Creative, Rubecon Communications, added, “Brands such as Asian Paints and Nerolac have been there in the market for over three to four decades and they have done branding in style. They are in top of mind of everyone. Our main objective is to highlight the brand name ‘Nippon Paint’. We came up with Blobby characters and it kind of differentiated us from other brands.”

Speaking about Blobbies, Anand Arun, Client Services Director, Rubecon Communications, said, “Blobby was picked up as a character by the consumer segment. When we were thinking on positioning of the brand, one of the insights which came up during the research was people pay a lot of attention to quality and durability of the paint and they also look for a lot of return they get with amount of money they have spent. Consumers are knowledgeable about the paint they use. Given this background in mind and given the product offering that Nippon is bringing to the table we worked on the positioning of international quality and high tech paint. The look and feel of the ad gives an international feel to the brand and high-tech quality also gets high rated.”

Is Blobby a mascot?

Blobbies are paint drops that are evolved into characters to represent the brand. There are different Blobbies for different features.

Speaking about whether Blobbies are the mascots, Arun said, “They are brand mascots but it’s not just one but there are several of them. Each of them has different characters.”

Raja added, “Blobbies are our brand ambassador. Other brands carry celebrities and here we have Blobbies.”

Brands like Asian Paints, Nerolac, Berger and others are featuring big names and roping them as brand ambassadors but Nippon India has come up with the concept of using Blobby as its brand ambassador. Is there any specific reason?

Raja replied, “We are very particular about ‘not’ doing what others are doing. In terms of marketing communication, today, there are brands featuring celebrities and I think they have been following a very plain kind of communication with the audience. We are very clear right from the beginning that we should not take that celebrity route at all. We always wanted to use Blobbies and that is what I think we have been doing for the past few years. Through Blobby, we are trying to speak about Nippon Paint.”

Singh stated, “Brands are flooded with celebrities and we thought of not repeating it. Since we have Blobby, it clearly differentiates us from others. We wanted to bring interaction between Blobby and human characters and in fact we made the Blobby talk for the first time. The main idea was to make Blobby speak and reply in just one word, Nippon.”

Through this campaign, Nippon Paint is focusing on only Tamil Nadu at this moment and all the activity will be focused around it. The brand is doing a 360 degree campaign on this and is supported across all platforms like TV, print, digital, outdoor, radio and others across the whole of Tamil Nadu.