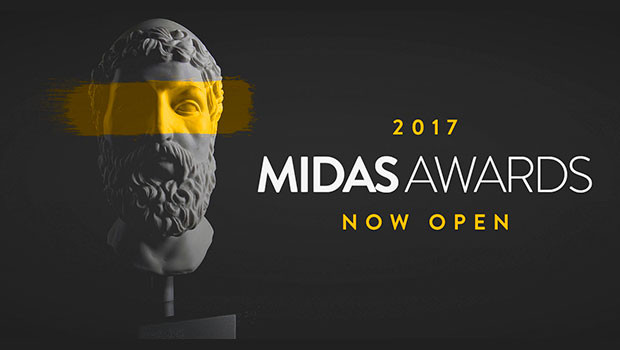 The Midas Awards for the World’s Best Financial Advertising is now open for entries. Founded in 2001, the Midas Awards is the only awards show to recognize excellence in financial advertising and marketing on a global scale.

The Midas Awards charges out of the gate this year with New York Festivals Inc’s, recent appointment of Scott Rose to Executive Director of the Midas Awards. Rose, a Creative Session Producer and Digital Assets Manager has produced and created showcase presentations for 4-plus years for New York Festivals 6 brands.  As Executive Director of the competition, he will recruit prominent industry executives to serve on the 2017 juries, create strategic alliances to benefit both the competition and its entrants and expand its global footprint.

With Rose at the helm, Midas has launched a number of new initiatives for 2017 including the addition of the Midas Executive Jury. This new jury adds an additional judging component to compliment the judging round provided by Midas’ award-winning Grand Jury.  In addition, Rose has initiated an expansion of Midas’ categories – adding a robust 12 newly minted categories

“We’re thrilled that Scott Rose has accepted the position of Executive Director and confident that he will apply his talents to successfully lead strategy and brand expansion of the Midas Awards, said Ellen Smyth, CFO/Partner of New York Festivals.  “His production skills and creativity, along with his dedication to NYF’s brands throughout the years have provided Scott with both a vast knowledge of how to run a competition and a thorough understanding of the industry.”

2017 marks the launch of the inaugural Midas Awards Executive Jury, a panel comprised of creative officers and executive creative directors from the world’s foremost advertising agencies as well as prominent internationally recognized experts in financial policy and communications. The Executive Jury will review the Shortlisted entries selected by the Midas Awards Grand Jury and will provide an even more comprehensive evaluation of global creative work.

“The Midas Awards, for the past 16 years has dedicated itself to honouring the planet’s most creative financial advertising and now with the addition of the Executive Jury the competition will hold creative entries to an even higher standard of assessment and insure that each global entry is judged with the utmost attention,” said Rose.

The Midas Awards invites entries in the following five category sections: Consumer, Business to Business, Use of Discipline, Use of Medium and Craft. This year the competition unveiled 12 new categories, 8 within the Consumer Categories, and 3 into business to business Categories and 1 in Use of Discipline. These categories reflect the unprecedented growth of the Midas Awards and the extensive scope that the world of financial advertising and marketing encompasses.

Jury selection has begun for both the Midas Awards Executive and Grand Juries. These juries represent the respected and influential minds in financial advertising. Client and agency leaders from the creative and marketing disciplines, as well as internationally recognized experts in financial policy and communications, will participate on both juries.

Midas awards Gold and Silver Ingots to the highest scoring entries, and presents the Grand Midas to the entry considered “Best in Show.” The results of the juries are parsed in an annual rankings brief, The Midas Report, —a veritable who’s-who in the world of financial services advertising that includes the 3 individual reports: Agency, Brand and Network.