With the two ads, #ReinventMyStory and #ReinventFatafatHomework, the brand is aiming to empower and the Gen-next at every stage of their lives by reinventing technologies to fulfil their goals and needs 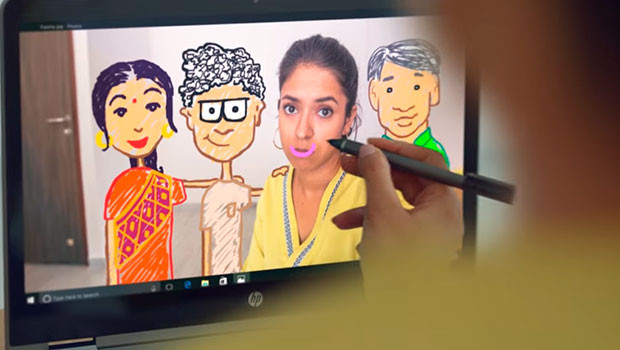 HP Inc, an American technology company, has come up with two marketing campaigns featuring its latest innovations in the personal systems and printing category. The brand’s aim is to target the Gen-next by reinventing technologies to fulfil their goals and needs.

Conceptualised by BBDO, the first campaign has been launched with a theme of #ReinventMyStory. The campaign is a tribute to the millennials who dare to chase their dreams. The campaign opens with a young girl who has shifted to a new city, at her new home. It shows how the girl is anxious and feeling alone in the new surroundings.

Throughout the film, ‘Love you zindagi’ plays in the background and lends a sense of happiness and empowerment to the millennials who dare to dream. Through this campaign, it shows how inking capabilities of recently launched notebook, HP Pavilion x360 came to her rescue and made her happy.

The second TVC, ‘Last minute Laddoo’, is aimed to young parents of school-going children who are aged between 4- 12 years and who do not have a printer at home. Launched with the theme of # ReinventFatafatHomework, the campaign highlights the regular story of parents and children who try hard to meet everyday requirements of competitive school curriculum.

The video opens with a child, ‘Laddoo’, who has a habit of forgetting his homework. One day, he forgets to create a family tree which was his homework. But he remembered it while waiting outside his home for his school bus. His mother immediately prepares a family tree on her phone and helps him by printing the same on a HP Printer via HP Smart App. The video highlights the advantages of instant, on-the-go printing through HP Smart App.

Speaking about the campaign, Ayesha Durante, Country Marketing Head, HP Inc. India, said, “Young students are among the biggest drivers of technology consumption. At HP, it is our constant endeavour to stay connected with this generation and tailor our products to their needs. Our latest marketing campaign is targeted at this consumer category. Through it, we want to underscore how HP’s technology is empowering them at this important stage of their lives, by providing them tools that enable them to stay ahead of the curve.”

Speaking about the brief given by the client, BBDO spokesperson, said, “For #ReinventMyStory campaign, the brief was to target millennials (16-22 years) in Tier 1 to 3 cities who are looking for a PC that would meet more than mere functional need and a great partner in self-expression and creativity. For # ReinventFatafatHomework campaign, we wanted to talk to young parents (primarily mothers) of school-going children aged four to eight years old who do not own a home printer. The idea was to make them realise how easy and convenient it is to unlock learning activities from their mobile devices while at home or on the go to help their child’s learning.”

Both the TVCs are in completely different space as one featured a young girl, which is more of an aspirational campaign while that of Laddoo’s is a quirky funny one. When asked about the reason behind two separate plots and positioning, the agency shared, “While the TVCs are product specific, they narrate HP’s brand journey within an individual’s life and therefore we created two different plots in order to make it more relatable to the consumers across age groups.”

Coming up with two different campaigns, what is the brand planning in future? Are they going up with newer campaigns as well?

#ReinventMyStory as a communication platform brings alive small but significant moments in which the next-gen is rewriting their own stories. For the # ReinventFatafatHomework campaign, the need of last-minute printing has been the core insight for home printer campaigns. They will continue to explore this powerful insight for future campaigns, the agency shared.

The TVCs are being aired across leading news and general entertainment channels along with amplification on various social platforms.

He stated, “The two ads of HP are more stand-alone than part of a single campaign. The girl’s ad, though well-made, has an outdated plot to begin with. Even that is not on money as the premise of being connected is owned by smart phones more than by any other device today. So it’s like an ad for a phone changing its mind in the last 10 seconds. The kid ad on the other hand shows that when you don’t have a great picture to frame, use a great frame instead. It uses humour to good effect and makes its tiny point only at the end of an entertaining piece. And that’s a point well made. Having said that, the fact that the two ads do not sit in one folder and the marginal product stories they narrate do not seem to level with the gravitas of a brand like HP.”

Prathap Suthan, ‎Managing Partner/Chief Creative Officer, BangInTheMiddle, said, “This is definitely a change from the slightly dull imagery that HP has been all about. It is in line with HP's global campaign and the Indian executions are not entirely far away from the global executions. However, the variance in the tonality between the Indian ads is fine. They work for the category, and besides the two different products have their own target audiences. Personally I love the 'last minute Laddoo' ad. And while the root of the film comes from a very common truth that's alive in almost every Indian home, it keeps the parents as the target. Because when it comes to homework and projects, I am sure most moms and dads get involved. It's a global truth, but Indian parents are far more invested in their kid's school life. Keep reinventing as a thought may not be overtly visible in the busy narrative of the film, but it finds itself coming through at the end. Delightful work and very much in the Indian context.”

Akashneel Dasgupta, Senior Vice-President, ADK Fortune, said, “I see a very different approach for each of these campaigns as both are doing justice to two different products from HP with the latter being just the mother brand.

The intent could have been to treat the brand of laptops and printers as two separate sub-brands without borrowing anything significant from mother brand HP, thereby rendering each category with its own tonality.

Such an approach is fair and works fine in a scenario where the mother brand spans across different product categories that are very distinct from each other.

It is much more difficult to do the same where the product categories are too similar or have the same drivers. For example, can't do the same for a Dove in between the hair and skin categories.”

Director: Peyton Wilson from US