The recent leaked video of episode no. four bears the watermark of Star India. The HBO servers too were recently hacked and nearly 1.5 TB data was stolen from the company’s servers, including scripts of season 7 and other shows 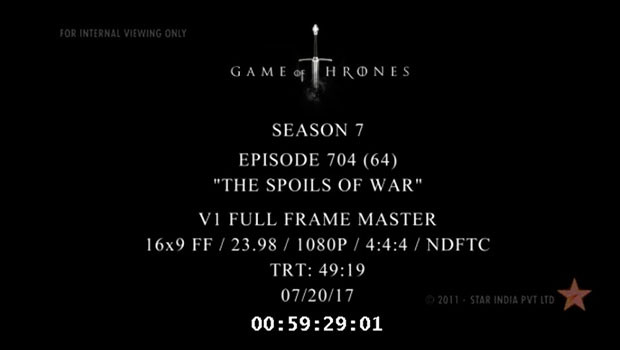 Once again, the Game of Thrones faces the ‘leak test’ as the fourth episode ‘The Spoils of War’ of the ongoing season 7 hit the internet on August 4 morning. While the show faces the same fate every season, the difference this time was that this episode was not leaked from HBO’s end. Star India, the distribution partner of HBO for the Indian market, has taken the responsibility for this leak.

Recently, the HBO servers too were hacked and nearly 1.5 TB data was stolen from the company’s servers, including scripts of season 7 episodes and few other shows. But the recent leaked video of episode four bears the watermark of Star India.

A statement by Star India as relayed by HBO, attributed to the company’s spokesperson, read, “This confirms the compromise of episode 4 of Game of Thrones season 7. We take this breach very seriously and immediately initiated forensic investigations at our and the technology partner's end to swiftly determine the cause. This is a grave issue and we are taking appropriate legal action."

As reported by the international media, the video was taken down from the internet after a few hours. The video was of very poor quality with Star India watermark, media reports said.

While everyone is asking if the leak happened because of a successful hack or was leaked by an insider of Star India, an expert noted that Indian media companies are not cautious about cyber security.

Ankush Johar, Director, BugsBounty.com said, "The cyber security posture of most media companies in India is extremely weak. Majority of them have not had basic testing carried out, thinking who would attack them. The Chief Technology Officer of a mainstream Indian media company had told me once, that it's all going to be broadcast anyway. Why spend money on security then? Game of Thrones and its craze is a reminder that there is content whose early release still carries significant demand and value. Media companies don't realise how important it is to hold on to 'precious' content be it 'sting operations' from the news desk or 'Game of thrones' – like high demand content."