Earlier during Doordarshan days, Independence Day programmes were live telecast from Red Fort. But now with multiple channels, there is ample special programming line-up both in news and non-news genre channels, sometimes leaving us confused what to watch and what not. A glance at a few of them 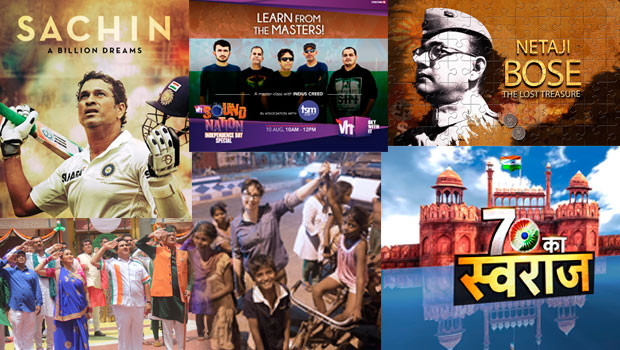 It’s so nostalgic to switch on the TV every August 15 to watch the Independence Day celebrations and be a part of it. As India celebrates 70 years of its Independence on August 15, television channels prepare special content line-up to commemorate the day. Within the news genre, News18 India, CNN International and CNN-News18 and among the non-news genre channels, Sony Pictures Network’s India channels, Zee Cinema, Discovery Channel, History TV18 and National Geographic have planned special programmes for the day.

The channel started its celebrations on August 12 with a number of specials under the umbrella branding Sattar ka Swaraj. This includes Azadi Ke Gaon (highlighting the story of a village where villagers still don’t have access to electricity and water); a special show on submarines with an exclusive report from inside an Indian Navy submarine; Heroes of Second World War (focusing on the forgotten Indian heroes of the Second World War who fought alongside the allied forces); Azadi Ke Tarane (compilation of popular patriotic Bollywood songs), Kashmir Mein Bharat Bhakt (featuring those in Kashmir who are nationalists and swear by this country) and a special episode of Lapete Mein Netaji.

CNN International will have a spotlight on two countries with special digital initiatives. The network’s ‘Birth of 2 Nations’ series examines young nations on the march through the prism of their history, politics, sports and cultural life. Tapping into the power of CNNVR, the immersive journalism unit and virtual reality platform within CNN Digital, CNN will provide viewers an immersive experience of the Rashtrapati Bhavan with 360-degree footage of the presidential residence.

A special interactive on the ‘Memories of the Independence generation’ will look into the recollections of the last people to remember an undivided India. This will include commentaries by Partition documentarians, including Urvashi Butalia, Aanchal Malhotra, Rana Chhina and Mallika Ahluwalia. A digital feature will focus on the first Indian Prime Minister Jawaharlal Nehru’s famous ‘Tryst with Destiny’ speech. Then there will be ‘India in three generations’ an illustrated write-up by Indian cartoonist Arpan Roy. A special digital piece will take viewers inside Burns Road in Karachi, where shopkeepers are the descendants of partition refugees, providing a slice of Delhi in Karachi by serving authentic Delhi food.

A special poll is being conducted on what an all-time “Subcontinent XI” cricket team would look like, spanning the greats from India, Pakistan, Bangladesh and Sri Lanka.

The channel looked at an early celebration of Independence Day between August 11 and 13. Ranging from a series on the partition to the history and advancement of India in the fields of sports and cinema, the channel’s line-up of shows included Memoirs of Partition; Cinema Zindabad; India@70: The Game Changers and INS Sindhudhvaj.

Hindi business news channel CNBC Awaaz has chosen India’s 70th Independence Day as the occasion to create awareness and encourage people to donate towards a mid-day meal of a child under the campaign for Independence Day – Bhookh se Azaadi. The channel has partnered with Akshay Patra, an NGO working extensively on implementing the mid-day meal programme across different schools in India.

Vh1 has lined up the finest shows on India’s 71st Independence Day. The channel will celebrate Independence Day with a unique musical special Vh1 Soundnation that will feature Indie artists who have contributed to the rise of the music scene in the country.

These shows include six Vh1 Soundnation gigs and two festivals, including Nikhil Chinapa’s Satellite Festival, five radio interviews with trending Indian artists namely Vasuda, Rajakumari, SPRYK, Oceantied & Burudu on August 11. To top it all, the channel is also curating a special playlist featuring the best of Indian artists who have contributed immensely in the rise of India’s music scene on Vh1 Soundnation- Independence Day Special.

Vh1 is set to take its viewers on a musical journey to retrace the roots of one of India’s prominent Indian musician, Nucleya, showcasing the never-seen-before journey of the artist through the World Television Premiere of Ride-to-the Roots with Nucleya.

The flagship show of the channel will have a flag-hoisting sequence on Independence Day. The twist in the episode will be that there is a discussion on who will hoist the Tricolour in Gokuldham. The track began on August 9 and will run through till August 18.

Sony BBC Earth has planned telecast of two special shows – Hidden India and Kolkata with Sue Perkins starting 11am on August 15. Hidden India will take viewers on a breath-taking journey of the land with colourful landscapes and exotic cultures. This series brings together the sights and sounds of Incredible India at 11am. Next is an intriguing account of the City of Joy through the eyes of an English comedian – ‘Kolkata with Sue Perkins’ at 2pm. English host and comedian Sue Perkins captures the vivacity of Kolkata and shows the never-seen-before side of the city, with a tinge of humour and liveliness.

Late last year, Shilpika Gautam led a team of four individuals in a unique attempt to cover entire length of river Ganges on a stand-up paddle board. The team covered the length of river Ganges over 101 days of continuous paddling. Starting from Gaumukh in Uttarakhand, the team paddled the entire length of river Ganga through the states of Uttar Pradesh, Bihar, Jharkhand and West Bengal. The journey culminated at Sagar Island (Ganga Sagar) in the Ganges delta in West Bengal. During the process, Shilpika Gautam broke the world record for the longest continuous stand-up paddle boarded distance by a female in a single journey.

Discovery covered this inspiring expedition and integrated the work done by National Mission for Clean Ganga (NMCG), the implementing arm of Namami Gange programme, at key junctures to create this unique and special series.

The channel is presenting a marathon of inspiring stories ‘India 70 wonders’’ starting August 18 every Tuesdays and Wednesdays at 8pm and a documentary on Subhash Chandra Bose, ‘Netaji Bose and the Lost Treasure’, on August 18 at 9pm. India 70 wonders will feature inspiring and out-of-the-box OMG stories of India and Indians. Some amazing stories from across the country include the cemetery-hotel in Ahmedabad, a barber who drives a Rolls Royce, a 75-year-old woman who has mastered Kalaripayattu, a man who transforms iron nails into art and the likes. A series of seven extraordinary episodes, each episode will showcase 10 inspiring stories that will depict 70 years of a young nation that is at the crossroads of change.

The next offering is a television first, based on Subhash Chandra Bose, one of the most dynamic leaders of India's struggle of independence. The thrilling one-hour special is filmed in India, Malaysia, Singapore, Myanmar and Japan and uses rare archives as it pieces together the mysteries.

Reaching out to over 700 million viewers in India, SPN will bring the country together on Independence Day by striking an emotional chord with fans of SPN’s Ambassador for Sports, Sachin Tendulkar. Directed by Emmy-nominated British filmmaker James Erskine and produced by Ravi Bhagchandka, this is a biographical film that captures Tendulkar's cricket and personal life in substantial detail, as well as reveals a few aspects of his life that have never been heard of or seen before. The movie features real footage, including clips from his matches and interviews with colleagues and family and present day stars, including Virat Kohli and Mahendra Singh Dhoni. The biopic also marks the acting debut of the master blaster.

Sony Pix organised a line-up of movies in PIXathon as a run-up to the Independence Day, on August 13. The thrill began at 9am with an action drama feature, Pearl Harbor – a story on one of the most momentous attacks in the history. By noon, Gladiator takes over your television set. There is time to grab the munchies before The Patriot starts – where a ferocious veteran tries to protect his family against the war. As the sun goes down, soak yourself into the glory of one of the most classic action movies of all time Rambo: First blood 2. Let the last triumph of the day be with Waterworld where you can witness how one person saves mankind after an apocalyptic event.