“We need to get 30 crore kids on the playground,” says Sanjay Gupta, Star India

Gupta explained how the 2017 Champions Trophy was watched by 42 crore Indians, 2.5 times the number of people who voted for the largest party in the 2014 Lok Sabha elections. He says how motivating kids to play more can take sports in India to greater heights 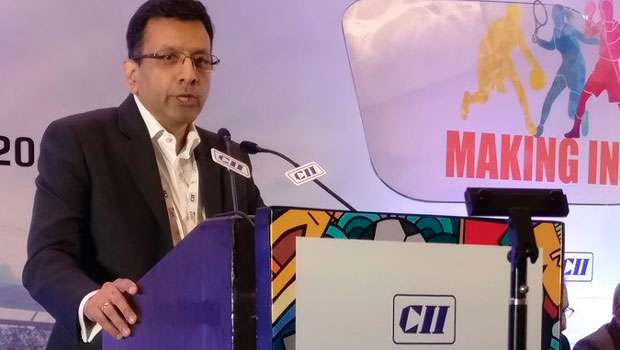 In his theme address at the CII Scorecard 2017 on July 6, Sanjay Gupta, Chairman, CII National Committee on Sports and Managing Director, Star India, explained the current scenario of sports in India and specified a target which the country has to achieve. Sharing anecdotes from his experiences at Star India and otherwise, he gave a ray of hope that 30 crore Indian children could be taken to the playgrounds.

I remember five years ago, when Star India got into the business of sports, the number of conversations just answering the question, why? Everyone used to be tentative around associating with and investing in the business of sports. And understandably so. The traditional wisdom was that this industry has nothing to offer, it will struggle with dilapidated infrastructure, little funding and almost no focus from any stakeholder.

And just look at how far we have come!

Cricket, the mainstay of sport in this country, has actually gone from strength to strength. There are more tournaments and newer players coming in. From IPL, to now local leagues in Tamil Nadu and Karnataka, cricket has become more local than ever. And most importantly, the new young teams, both men and women, have brought a fresh zeal to the game. The viewership of cricket today is at an all-time high. The 2017 Champions Trophy was watched by 42 crore Indians! This is 2.5 times the number of people who voted for the largest party in the 2014 Lok Sabha elections.

Every morning as I step out of my home in Mumbai, I see hundreds of people running. I am sure each one of you experiences the same in Delhi, Bangalore, Hyderabad, Chennai, Kolkata and many large and small cities. Today, I believe there are more than 3,000 organised events, almost 10 events per day where people are running marathons or half-marathons.

I remember when we were trying to kick start the kabaddi league, although this sport already had a strong following in states like Punjab and Haryana, we couldn’t add teams from those states just because they didn’t have a single indoor stadium to host any matches. There were almost no professional trainers, coaches, technical crew, commentators – it seemed like a bottomless pit. And look at where the sport is today. It has become the second biggest sport of the country. But even bigger is the fact that kabaddi players are feted and recognised, and their stories have found their way into every corridor conversation!

Today, I am proud to say that our partner Vivo is putting in mega multi-million dollars on kabaddi for the next five years. This deal is the second largest sports sponsorship in the country after IPL.

This is the logic-defying leap that sport has taken – despite no change in our infrastructure, or public funds. What we see today is the power of young, enterprising India giving sports a new lease of life.

So does this mean this is it, our jobs are done?

Absolutely not! Let whatever I have said not hide the reality of the challenges we continue to face. Despite this glitz and glamour of viewership and money, the reality remains that sports as an industry is just at a $2.5 bn size today. Whereas in a country like US, this sector is over $80bn! We have all been celebrating the leagues that have come up, but again US has more than 30,000 league games happening in a year and we aren’t even at a 1/50th of that number.

Why does such a gap exist? What trick are we missing here? Are the reasons the same, oft-repeated issues of infrastructure, training, coaches or funds?

The real problem isn’t there. We have reached the size of $2.5bn just on the back of just about 10 per cent of young kids playing and participating in sports. Our youth has shown us across sectors that they have the power to compete with the best in the world. The field of IT is a great example. This opportunity in IT came through because of millions of our young kids experiencing maths and science in their early years, and many of them going on to pursue engineering as a profession. In a recent survey done across the country, we found that kids in India on an average play 20 to 30 minutes in a week. This means that they spend 3 to 5 minutes in a day playing sport. Compare this to kids of the same age in more developed markets like US and Europe who play roughly an hour a day. Herein lies the problem.

Is it that kids in India are physiologically so different that they don’t have a desire to play? Of course not! What is coming in their way is our mindset – of parents, schools and of businesses.

The narrative in our society, parents and communities has always been that academic study is the only pathway to success and play is a waste of time. Sports is equally important and needs to accompany and complement formal education to power success.

Sports has the power to inspire, to unite, to teach us things the way nothing else possibly can. This is the power we need to unleash. For that, we need to get 30 crore kids to play for at least an hour every day!

This isn’t even on anyone’s radar today – not the media, the federations, the policy makers or society at large. There is an initiative being run by the sports committee of CII where they are working with a group of 1000 schools, to redefine the perception of parents and school administration toward sports. But we can’t expect such initiatives alone to move mountains. Such a mammoth shift in mindset and behaviour requires a movement.