From dropouts to start-ups at MTV Dropout Pvt. Ltd.

For the first time on television, the show will take viewers through the process of identifying and transforming ‘dropouts’ into an ideal start-up team and kick-starting their entrepreneurial journey

MTV is all set to make young entrepreneurial dreams come true with the launch of a unique reality show Droom.in presents MTV Dropout Pvt. Ltd. Powered by Micromax and Maruti Suzuki with Grooming partner Gillette, it is the birth of the world’s first ever start-up formed on television. Created by Monozygotic and co-developed by MTV and Monozygotic, the show will premiere on July 29 at 7pm on MTV and next day onwards on Voot.

Dropout Pvt. Ltd. is a show that will take viewers through the process of identifying and transforming ‘dropouts’ into the ideal start-up team and kick-starting their entrepreneurial journey. It is the birth of a first-of-its-kind start-up company which is formed following a massive nationwide hunt to find hidden gems; the most brilliant people outside the established management and entrepreneurial system. These mavericks will then be groomed by industry leaders through trials-by-fire where they will have to solve real-world business problems in a short span of time.

Businessmen who have excelled in their respective fields, Sandeep Aggarwal, CEO & Founder of Droom.in; Anisha Singh, CEO & Co-founder Mydala.com; Alok Kejriwal, CEO & Co-founder of Games2Win along with the show’s hosts and creators Raghu Ram and Rajiv Laxman, Co-founders, Monozygotic will be a part of the panels identifying and transforming ‘dropouts’ into the dream start-up team to kick-start their entrepreneurial journey.

Ferzad Palia, Head, Youth, Music and English Entertainment, Viacom18, said, “India is brimming with young untapped energy keen on making ideas come to life and we at MTV, believe that as the largest platform for everything related to the youth, it is our responsibility to recognise, channelize and mobilise this energy by providing the youth with the right tools to make ideas happen. MTV aims at empowering these youngsters by providing them the biggest encouragement in the form of Dropout Pvt. Ltd. to kick start their entrepreneurial dreams. We at MTV realise that the youth today with their ‘go-getter’ attitude is willing to dream big to achieve their goals. We just want to give them the wings to fly.”

Speaking about the show, Raghu Ram, Co-founder of Monozygotic shared, “This exciting new show which revolves around the idea of entrepreneurship will be all about gutsy young minds keen on achieving their dreams. Rajiv and I saw a lot of potential in the idea of the show and we sat down with the MTV team to discuss and finalise the concept. The two of us together have conceptualised the show and will be producing and hosting the show as well. This is India’s first of its kind start-up reality show aimed at the youth and we hope to boost the confidence of a lot of youngsters out there as we already have a long-standing connection with the youth of India.”

“In a country like India where blazing one’s own trail is not encouraged too much; MTV is yet again taking a brave step by celebrating those youngsters who choose to go their own way by providing them with the correct platform to give life to their dreams. Through this show that has been conceptualised by Raghu and me, we aim to transform these young people into the ideal entrepreneurs and kick-start their start-up journey. When we were starting out, Raghu and I have had to go through a lot and hence understand the struggle and we both understand the youth very well due to the work we have done with them throughout our careers. It takes a lot to give up on everything and start something of your own and we are here to make this a lot easier for the youth out there," said Co-founder of Monozygotic, Rajiv Laxman.

Speaking about the show, Sandeep Aggarwal, CEO & Founder of Droom.in shared, “Dropout Pvt. Ltd. is a brilliant concept. This is an amazing platform for young minds who have a knack to start something of their own to be pitted against the biggest real-world business challenges, who must survive to form India’s dream start-up team. Entrepreneurship is nothing without risk-taking and taking risks is scary whether you are going for a game of poker or quitting your college to pursue one of your promising business ideas. Entrepreneurship is a real test of conviction, confidence and courage and the ones who take risks reach their destination. Dropout Pvt. Ltd. will be a great kick starter for all the risk- takers out there!”

Commenting on the unique concept of the show, Anisha Singh, CEO & Founder of Mydala, shared, “It feels exhilarating to be a part of the jury for Dropout Pvt. Ltd, especially after interacting with the kind of people who have walked in through the doors during the audition rounds. Each one had a phenomenal story or idea. It’s great that the Indian youth finally has a large platform to experiment with their ideas and launch their start-up dreams. We are looking for contestants who have the ‘self-starter’ attitude. Love that MTV recognises that the youth today has bigger dreams and is willing to do what it takes to beat the odds. They are ready to change the status quo to make a difference.  It's time to become bigger than your dreams and MTV is giving you a chance to do it.”

“It’s a different high being one’s own boss and a show like Dropout Pvt. Ltd. will help young minds kick-start their journey towards realising their dreams. Entrepreneurship is not only about being the best at what you do, it’s also about surrounding yourself with people who are smarter and can do a better job. MTV has given the biggest platform to young entrepreneurs to shed all their pretexts and learn how to build a company, not to sell but to keep,” shared Alok Kejriwal, CEO & Co-founder of Games2Win. 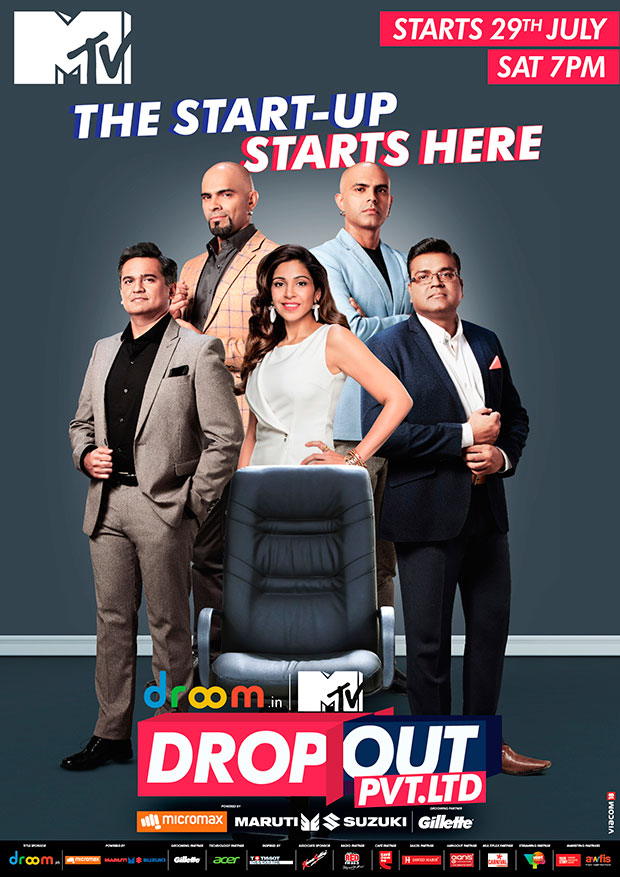