After Hours: Riding the winds of change – Anil S Nair

A self-confessed lover of anything with a motor, Nair is striving hard to turn that love into something that will also benefit the society at large. He talks to us about Goodwind Riding, the time he raced against a landslide and how he has been changing lives, one ride at a time 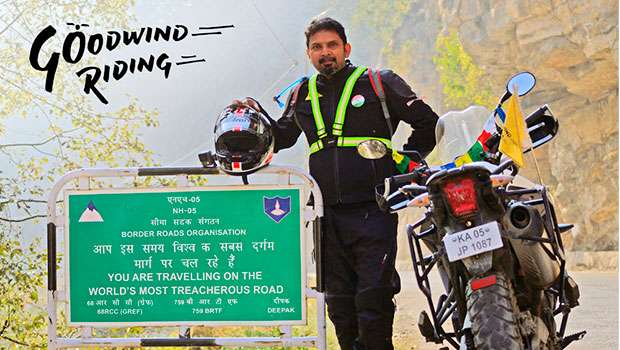 Unlike most teenage boys, Anil S Nair, CEO and Managing Partner, Law & Kenneth Saatchi & Saatchi, India, did not have to go through the highly difficult task of convincing his parents to buy him a bike. With a father, who is a bike aficionado, Nair was riding a bike to college without having to do any grovelling or pleading that boys his age generally have to do.

“My love for two wheelers comes from my father. He used to cycle a lot when he was young. My father’s primary mode of transport was always a bike till the time I and my sister started growing up, which is when he brought a scooter. I still remember all of us travelling in the scooter with me standing in the front. But he switched back to bikes at the first given opportunity and even today I think he is a far better biker than I am.”

Nair, who got his first bike at the age of 18, says his first bike saw him through his college years but he had to give it up with a heavy heart when he moved to Mumbai to study. “The first thing that I did after I moved to Mumbai was buy a bike from all the money I had saved up by doing whatever little work I could do while studying.”

But for Nair just any bike wouldn’t do. He wanted to buy a bike previously owned by a Parsi. Nair explained, to a visible confused me, that any vehicle owned by a Parsi would be in the best condition.

“A mechanic told me that there was this one Parsi guy who wanted to sell his bike and that I should go and speak to him. They are very particular about whom they sell their vehicles to and I had to give three interviews before I could convince him that I will take better care of his bike than even he did.”

Nair brought that bike at the princely sum of Rs 6000 and rode it on the streets of Mumbai until one day he had a brief albeit scary encounter with death.

“I met with a very bad accident. I was in very bad shape and my bike was torn into two. Even today there is a mark of that accident at the site like some war memorial.”

For obvious reasons, Nair did not inform his parents of the near fatal accident once he pulled through. But as luck would have it, his brother-in-law landed up in his office to pay him a surprise visit and was promptly directed to Nair who was cooped up in a friend’s place recuperating.

“Once my parents got the news, all hell broke loose. My mother wanted me to go back home but I assured them that everything was alright. I went back to work and within three months I had bought another bike,” grins Nair.

Nair had to give up his bike once he got married but in his own words his head always turned when he saw a well-kept bike. Finally, when he turned 40, he realised that it was time to get back to riding and bought himself a Royal Enfield Thunderbird.

According to Nair, one of the best things about riding is the camaraderie that is formed between riders. He met a few like-minded riders in his building and a Sunday ritual started where he and a few other enthusiasts set out on rides.

“One thing I have realised is that the people you meet once in a while on a Sunday and with whom you have a breakfast ride, start to become really interesting and thick friends. Once I became a part of a riders community I started to meet people from all walks of life and the one thing that we all agreed upon was that bikers are looked down upon but what I found out is that all these people are really nice.”

Another thought or belief that Nair holds very dear to his heart is that of giving back to the society. Nair wanted to do something that would combine the camaraderie of the bikers and the spirit of giving back. It was around this time that he did a campaign for Tata Capital.

“There is a biker called Pankaj Trivedi who was going around the hilly villages and crowdsourcing money to help the villagers there. That campaign got us a lot of awards and accolades. I still remember the exact moment the decision to start Goodwind Riding came to me. I was at Cannes and I was just walking around looking at all the work displayed there and a lot of that work was about changing the world and helping the needy and I remember thinking why don’t I come up with an idea that will help change the world.”

Nair’s motto is life is that when you dream you need to dream big and his dream was to build the world’s biggest biking charity movement.

“My dream is to have the yellow flag, which is a symbol for Goodwind Riding, recognised as a universal symbol for a biker brotherhood for help. So, when you see someone riding with that yellow flag, blessings should come from your heart because we bikers need it. Every morning before getting onto my bike I seriously pray because it is really dangerous to ride a bike, especially in India.”

To set things into motion and kick start his dream, Nair undertook what many considered impossible at that time. He decided to take a solo bike ride on the most treacherous bit of route: the Lahaul-Spiti stretch. Nair undertook the arduous 11-day ride for a charity called Children’s Cancer Care, which is Tata Memorial’s oncology ward for children.

According to Nair, one of the toughest things he has had to do was find a suitable charity.

“To my shock I realised that many NGOs in this space are very corporatised. They don’t even entertain a person like me. Also, I was very clear that every penny generated by this has to go to the needy and I was finding it very difficult to find an NGO that wouldn’t take a cut in the name of administrative expenses. That is when I met Imran. I knew of Imran socially because he was in advertising before and also my wife used to work with him. She was the one who told me about this cancer care that he handles. When I met him I realised that he works on similar principles as mine. He took the money in the name of patients and every penny went to them.”

Not even a year old, today, Goodwind Riding has helped many but not as many as Nair would have liked. A one-man army, Nair handles everything by himself outside office hours. But once the year is up, Nair intends to review Goodwind Riding and see what more can be done. “Every penny that I spend on Goodwind Riding comes out of my pocket so I will have to find a sustainable way to keep it going. It can’t be limited by one man’s bandwidth.”

The bucket list of rides that he would like to take includes almost all the roads one can possibly imagine but the one ride he really wants to take is the Garden Route in South Africa. But like many in the world of advertising, time is an issue and still Nair is confident that someday he is going to check all the boxes when it comes to his dream routes.

Planning, according to Nair, is paramount when one decides to embark on a journey that might be several days long. Apart from that, travelling light, knowing how to make minor repairs like change a tyre and basic first aid is also very important when taking solo rides.

Narrating an incident when he literally raced against a landslide, Nair said, “I was doing the Spiti ride when the landslide started. I had the choice to go back 45 kilometres but that would have meant about three-and-a-half hours of riding back and that would have increased my travel time by a day. The loose sand was just beginning to fall and I decided to race the landslide. In hindsight, it was a very foolish decision but I was lucky and cleared the patch before the boulders started to fall.”

For Nair, a moment that really stands out for him in all the journeys that he has taken till now is when he was going to Komic, the highest village one can reach through a motorable pass.

“This village is a two-and-a-half-hour ride up from Spiti. When I reached the village, it was magnificent. To my incredible luck, there was a village festival that was happening there. When I reached, there were monks coming in from all over the place and it was just an outstanding experience.”

So, what does riding really mean to him?

“It is meditation for me and also the most liberating thing.” Tags: After Hours Anil S Nair Riding the winds of change
Advertisment
More from this section