Star Maa has launched a fresh identity of its network channels with a new logo, positioning and programmes. An HD variant has also been added to the bouquet, Star Maa Movies HD 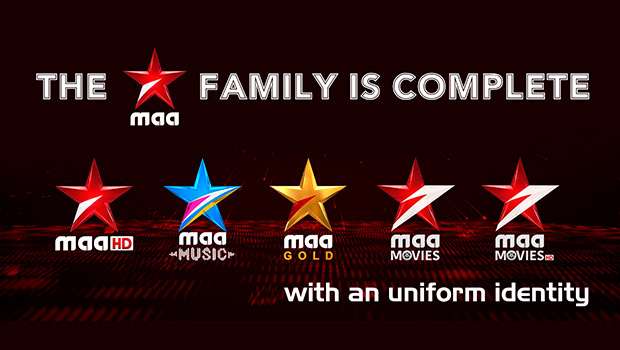 With the re-branding, the channels’ content offerings will further see a ramp up with bigger and better viewing experiences as a network. All the network channels will showcase and launch an array of new shows and innovative programming.

The brand proposition of Star Maa Music is to resonate everything that relates to music. Maa Music has grown two times over the last few months in terms of the viewership. New programmes like Connect & Restart have contributed to this growth and with the refresh that happened, Star Maa Music aims to reach young consumers and entertain them more.

Star Maa Gold is poised to be a GEC with a difference. It will aim to provide an alternative viewing experience. Unlike other mainline GECs that cater mostly to the female viewers with daily soaps and dramas, Star Maa Gold explores multiple genres like action, mythology, crime, comedy, reality, movies and other lesser explored content areas. The popularity of the channel has been seeing dramatic growth in the recent weeks and has grown three-fold compared to the beginning of the year.

Kevin Vaz, CEO, South Region, Star India, said, “We are in the entertainment space and with changing aspirations and expectations of viewers we always look to redefine entertainment. Innovation, content variety, spiffy packaging and quality of the channel is a sign of our commitment to Telugu viewing audiences, globally.”

He also added, “As we enter this new phase, we will continue to delight our consumers with new stories and new programmes that will redefine entertainment in various genres be it with gold movies or music channels.”

Alok Jain, EVP and Business Head, Star Maa Network, said, “Star India’s Integration with Maa was a testimony to Star wanting to build and grow in Telugu market. With this brilliant synergy, all the network channels underwent refresh on June 25, we are now poised to take a leap forward. With the new brand name and proposition, we plan to significantly scale up our offerings of all our network channels which have seen tremendous growth starting from the year of 2017.”