Right from media brands to health to FMCG, a lot of brands took to digital, outdoor and other mediums to send a message. BestMediaInfo picked up five such campaigns through which these respective brands tried to do their bit to the society 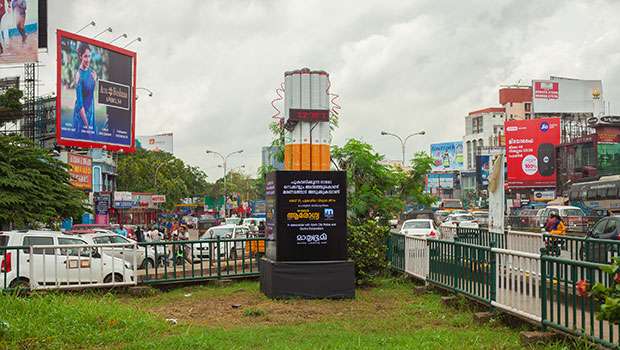 As the world observed the World No Tobacco Day, a lot of brands tried to discourage the habit of smoking amongst their consumers, through various mass media campaigns. Tapping onto digital, outdoor, print and television, the campaigns aimed at bringing out the dark side of smoking tobacco.

Right from media brands to health to FMCG, a lot of brands took to digital, outdoor and other mediums to send a message. BestMediaInfo picked up five such campaigns through which these respective brands tried to do their bit to the society.

Conceptualised by Creativeland Asia, the campaign called #BreakTheSmokeBreak helps people get off the puff, in a rather funny and quirky manner.

Godrej aer identified that the right time for a smoking intervention is when the person takes the smoke break. So, as an initiative linked to its musk.after.smoke fragrance, Godrej aer decided to #BreakTheSmokeBreak and surprise smokers with fake “urgent” phone calls (like, “Your mom is at the reception. Come back!” and “Free biryani in office. Come quickly.”)

The campaign began on Facebook and Twitter, with Godrej aer asking users to share details of friends who smoke, on breakthesmokebreak.godrejaer.com. They could then pick an “urgent” message relevant to their friend and click ‘call’ during the friend’s smoke break. After which, a call would be placed immediately, breaking the smoke break.

The activity saw over 5200+ phone calls made in just a day. One fake call at a time.

Kapil Dev Pillai, Head Marketing, GCPL, said, “We created the #BreakTheSmokeBreak campaign, based on the behavioural insight that a smoke break can be delayed or cut-out completely when called out for urgency. However for the people who compulsively have to smoke, we do have the Godrej aer musk.after.smoke variant, which neutralises the smell of smoke. While it does so, we strongly wish people don’t smoke at all.”

Anu Joseph, Chief Creative Officer, Creativeland Asia, added, “To get a smoker to quit smoking is the toughest thing to do. So, we thought of the next best thing. #BreakTheSmokeBreak. We’ve all done it occasionally to help people we care for. Now, Godrej aer helps us do it in a more fun, credible manner. And the numbers show its working.”

Mathrubhumi and its giant ‘Cigarette Bomb’

One of the Kerala’s largest media houses, Mathrubhumi Group, is trying to spread the message of anti-smoking in Kochi city through an ambient – installation placed at Vytilla junction in Kochi, Kerala.

The objective is to create awareness among public about the harmful effects of tobacco. The installation is created in shape of a ticking time bomb, with the dynamites replaced by cigarettes, the ‘Cigarette Bomb’ reminds people about the after-effects of smoking. The cigarettes used in the model were made using PVC pipes and a timer clock was attached on both sides. The caption on the installation read ‘every second you smoke a cigarette, you’re getting closer to death’. The underlying message of the installation, suggesting that smokers are like a ticking bomb.

The installation was created by Maitri Advertising and is a joint effort of Kochi city police and Corporation of Kochi in association with Mathrubhumi.

Practo and its twisted game of ‘Snakes’

Practo, the medical services app, has launched a quirky campaign on digital platform- "Accha jalata hoo, duwaon mein yaad rakhana” that has been created in association with Digital agency - Blue Bot Digital. The campaign hits the message that ‘Don't let the habit win’, so that people are aware as to their habit is consuming them.

The video shows a popular Snake game but the snake is represented as an actual cigarette and how it is consuming people. Snake has always been a popular game. The concept of showcasing smoking as a habit that is bad for health through the popular game draws people’s  attention and also helps spread the message that smoking habit is harmful, and it consumes you.

Orient Electric tried to touch upon a harsh reality of being a wrong influence on children through its new digital film #StubTheHabit. The film begins with a small kid stylishly pulling off his father’s oversized coat in an attempt to imitate his father. He then tries on a tie with it, as the father secretly admires his son’s innocence from behind the door. In his effort to look more like his father, the kid picks up a pencil and starts to puff into it like it’s a cigarette.

The sight baffles his father, as he realises what he’s been teaching his son subconsciously. He takes a conscience-stricken look at the burning cigarette in his hand and immediately stubs it and walks towards his son implying a new beginning of no smoking.

The campaign is conceptualised and implemented by DigitalsLBi. Vineet Singh, Branch Head Delhi - DigitasLBi said, “The brief to create share of voice (SOV) for the brand on living a healthier life. Targeting adults through their children, we tried to establish the fact that “what they see is what they do” and it’s up to us on what we want them to take away from, thus leaving the audience with a thought provoking call out to say no to smoking and #StubTheHabit.”

While Comedy Central and Colors Infinity took the video route to spread the message, Vh1 presented a unique method to fight the urge of smoking with the launch of a fun fidget microsite. Research states that it takes approximately 3.5 minutes to smoke a cigarette. Vh1 is geared up to replace that urge by launching the healthy digital fidget toy. MTV has shared ‘Letters to Cigarettes’ on its social media platforms. All these activities are being cross promoted across all the five brands.

Ferzad Palia, Head, Youth and English Entertainment, Viacom18 said, “While everyone is aware that smoking or chewing tobacco is harmful, most young people do it anyway because it is perceived as ‘cool’ or sometimes due to peer pressure. What we are aiming to do through this unique five brand campaign is to try and speak to them in a language they understand – humour – to truly drive home the message.” Tags: No Tobacco Day
Advertisment
More from this section