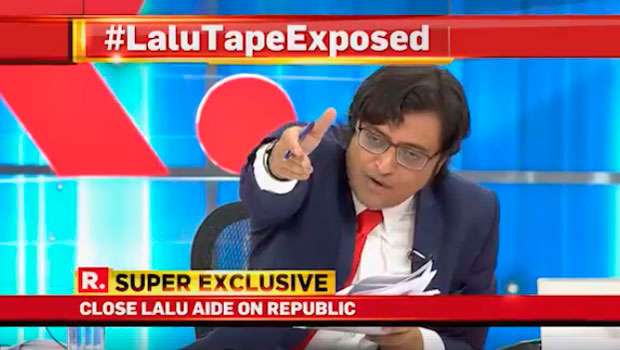 Bennett, Coleman and Company (BCCL) has lodged a police complaint against its former employees Arnab Goswami and Prema Sridevi for “commission of offences of theft, criminal breach of trust, misappropriation of property and infringement of IPR of BCCL” by using tapes allegedly procured when they were with Times Now, on Republic TV on May 6 and 8, 2017.

The FIR was lodged on May 16. Goswami called the complainant nervous and unconfident. He said, "Interesting to see them so nervous, if the Times Network has lost viewership, they must evaluate their content and show some grace even in defeat. I am sitting and working in a newsroom and the TOI owners are sitting at the police stations. This shows nervousness and they must show greater poise and realise that new age journalists will not be cowed down by these silly stunts."

BCCL owns and operates various television channels in India with a substantial presence overseas. One of the channels owned and broadcasted by BCCL is Times Now, an English news channel that had employed Goswami from May 2004 to November 2016 and Sridevi between June 2005 and February 2017.

Goswami (ex Editor-in-Chief of Times Now) has launched an English news channel Republic TV on May 6, 2017. On the first day of its launch, Republic TV carried an expose on Lalu Prasad Yadav in which audio tapes containing phone conversations between the ex-chief minister of Bihar and Shahabuddin while he was still in prison were played out.

Another expose was done on Republic TV by Goswami on May 8, 2017 in which audio tapes of phone conversations between Sridevi (former News Reporter of Times Now), the late Sunanda Pushkar (wife of Congress leader Shashi Tharoor) and their house help Narayan was broadcast.

Both these exposes displayed material (in the form of audio tapes of phone conversations) that was allegedly procured and accessed while Goswami and Prema were with Times Now. Times Now says an internal inquiry has pointed out that these tapes were procured and in the possession of Goswami and Prema Sridevi while they were in the service of BCCL.

In fact, Goswami and Sridevi have, on Republic TV, admitted and claimed that the audio conversation in the Pushkar case aired on May 8, 2017 was in their possession for the last two years when they were in their previous organisation, which is Times Now.

Goswami was anchoring the primetime debate show The Newshour on Times Now and was based in Mumbai, while Sridevi was also working for the same show, being located in Delhi. As mentioned in the first information report (FIR), the two audio tapes were a part of the preparation done for the content that was telecast on The Newshour, much before the two former Times Now employees left the channel.

The complaint reads, “Goswami and Sridevi have wilfully, deliberately and with knowledge converted for their benefit and used the aforesaid intellectual property of Times Now and thereby dishonestly misappropriated the said intellectual property, thereby committing the offence of criminal misappropriation of property punishable U/Sec.403 of Indian Penal Code (IPC) and several other provisions under applicable laws.”

The FIR also mentions, “However, Goswami and Sridevi in breach of the reason, purpose and objective of having been entrusted dominion over the said IP of Times Now channel, in collusion, connivance and conspiracy with others known and unknown including the Directors of M/s ARG Outlier Media Asianet News Pvt Ltd, dishonestly misappropriated and converted to their own use the said IP and dishonestly used the same for airing on Republic TV in violation of the direction of law and legal express contract, provided for in the respective employment contracts of Goswami and Sridevi prescribing the mode and manner in which such entrustment of IP in both the accused was expected to be discharged.”