India Today TV put up a hoarding beside RepublicŌĆÖs strikingly similar advertisement in Delhi on Saturday, creating a buzz on social media. While Republic is set to be launched on May 6 and was communicating ŌĆśArnab, with you soonŌĆÖ, India Today TV introduced Anjana Om Kashyap, its new face for ŌĆśTo the PointŌĆÖ, communicating #ReachedAndWaiting. The business is what matters the most and viewership is what drives the business. Will this affect anyoneŌĆÖs viewership positively or negatively?

Following our report, ŌĆśIndia Today fields a new face to counter Arnab GoswamiŌĆÖs RepublicŌĆÖ, we tried to analyse the marketing strategy behind the move and spoke to a few brand experts and media planners to understand the possible impact of campaigns on the two brands -- Republic and India Today TV.

An email sent to Republic went unanswered till the time of filing this report but a source close to TV Today group said the aim was to create a buzz around Anjana Om Kashyap, a new anchor on the English news channel but a popular face on the Hindi news genre. ŌĆ£The idea was to catch attention and the channel has achieved that. Possibly, the channel would not talk about it since the hoarding was uploaded only for a few hours. Since Republic changed its creative, India Today TV also changed its creative. The new one promotes the India Today magazine,ŌĆØ said a source close to the development. 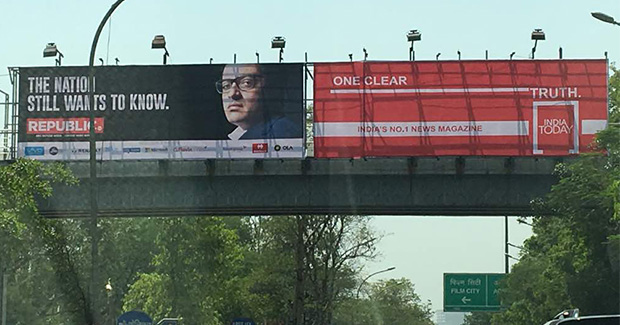 A media planner who is constantly in touch with the channel said, ŌĆ£The channel is very confident of the success of the campaign. It wanted to create buzz around the launch of Kashyap and it has done it to a certain extent. It is like, if you fight with the most aggressive student in the class, you automatically get highlighted and the limelight is all yours.ŌĆØ

About the duration of the campaign too, the planner said, ŌĆ£RepublicŌĆÖs hoardings were present for over a fortnight. India Today TV might have decided to put up their ŌĆśduplicate/ challenging versionŌĆÖ on the last day of the formerŌĆÖs. Yes, India Today TV put the hoarding for a few hours.ŌĆØ

Ambi Parameswaran, Founder, Brand-Building.com had a very positive comment to make. He said, ŌĆ£I think India Today's hoarding is topical. There is probably no big strategic motive behind it. Their English Channel, unlike their Hindi news behemoth AajTak, is not the top channel. They are just poking some good natured fun at Republic. It is good to see their chutzpah. We can wait for Times Now to do something more.ŌĆØ

On the other hand, Ramanuj Sridhar from Brand-Comm said, ŌĆ£It indicates a certain level of nervousness about an upcoming player. I don't think Times (Network) will ever respond to Republic in this way. They might respond through programming, through cartoons, satire but not through mass media for sure. I would rather see that this as a tactical communication and I'm not sure what its impact would be.ŌĆØ

A media expert from the media agency fraternity pointed out how the visual similarities are way beyond the natural thought process. She pointed out, ŌĆ£The visual style is completely copied and I think Republic might just take action considering that there are serious copyright issues. The design is copied almost inch by inch.ŌĆØ

Saurabh Uboweja, CEO Brands of Desire says, ŌĆ£It is an opportunistic move. India Today might have done this since it has not occupied any particular space in this genre. It might be looking at taking the position of a challenger brand.ŌĆØ

Taking an analogy from the Lok Sabha elections, Uboweja said, ŌĆ£When Modi was fighting elections from Varanasi, everyone knew he would win but Kejriwal still went ahead to compete. You do that with complete knowledge that you are not fighting to win but to create your own buzz and seek attention. This too is an attention seeking campaign and it does some benefit to Goswami as well.ŌĆØ

Sridhar pointed out how this market is over dependent on viewership. He explained, ŌĆ£It is already a dog eat dog situation, especially in the English news genre. In such a scenario, the entry of one more player is definitely a thing to get prepared for. Even now, everybody is snapping and trying to buy someone elseŌĆÖs share. This might help in boosting sampling, but I am not really sure of that.ŌĆØ

On the other hand, Uboweja was quite confident that the strategy is possibly to become a strong No. 3, rather than fighting for No. 1 and 2. ŌĆ£It is clearly business thinking than the competitive spirit around it. Times Now is already on top and Republic is coming soon. So the first two slots will always be between these two. May be that India Today TV is trying to establish themselves at No.3, which is not at all a bad idea, strategically.ŌĆØ

Uboweja is very clear that pitting anyone against Goswami is going to help the channel (as a brand). ŌĆ£Pitting someone who is not as big a brand as Goswami is always going to help the brand (channel) that is trying to compete with Goswami. Nobody is irrational in spending money on marketing to show competitiveness. Everyone wants that piece of prime time. It is an interesting move. Trying to create a credibility, saying ŌĆśwhile Republic is about to come, we are already there. Why donŌĆÖt you watch us out first.ŌĆÖ I feel that if the content is good, they will definitely take away a few viewers by getting that sampling first.ŌĆØ

Also read:┬ĀRepublic will become the No. 1 news brand in the country: Arnab Goswami

Another media expert who didnŌĆÖt want to be quoted showed immense confidence in Goswami. She said, ŌĆ£Anyone standing in front of Goswami right now is ought to lose, maybe thatŌĆÖs why they (India Today) have not used an established anchor. Kashyap doesnŌĆÖt really have much to lose. She can still go back to being the queen of Hindi news. As advertisers too, we always look for Goswami above any other anchor on the English news genre and Kashyap takes an important spot in the Hindi genre.ŌĆØ

Sridhar has a few interesting observations to make. ŌĆ£In terms of execution, Republic has always projected the anchor because that is the strong point for them. I don't think they can talk about anything else right now and television is largely being led by people. It is peopleŌĆÖs business and from that perspective, highlighting Goswami makes a lot of sense. But for India Today Television, it is very strange. A lot of people wonŌĆÖt even know who this anchor is. Unless and until you have a known face, I don't know how a campaign can be led by one single person. In this case, I don't have a problem in recognising the opposition and saying that they're ready for you but you could have better showed someone like Sardesai or Rahul Kanwal or whoever else you have to serve. Why would you put an unknown anchor against someone who is in himself a very big brand.ŌĆØ

It is true that Kashyap has spent about 14 years in Hindi journalism and is a renowned name there, but the overlap of audiences in Hindi and English news is very little. Sridhar further added, ŌĆ£I am an avid news viewer but I don't know this lady because I don't watch Hindi news and a lot of people in the South are alien to Hindi news space. So, she is as good as a newcomer.ŌĆØ

Bombay HC to pronounce final order on August 24 in TRAI vs broadcasters' case on NTO 2.0