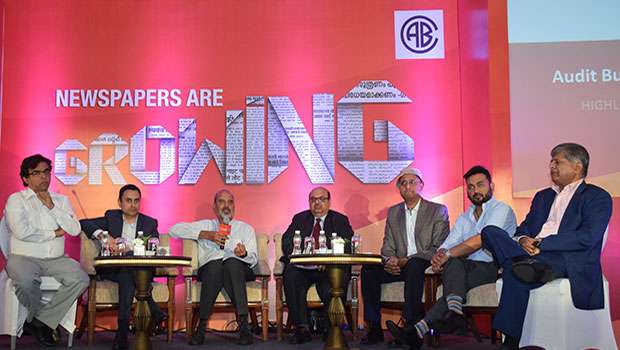 Print media is growing in India despite its decline in all the other markets, says the Audit Bureau of Circulation’s (ABC) latest report. The (compound annual growth rate) CAGR for the sector is pegged at 4.87 per cent, says the report presented by ABC member and CEO of IPG Mediabrands, Shashi Sinha, in Mumbai on May 8.

Two major reasons for the growth of print include low pricing and the fact that newspapers are easily accessible and available at home, said Sinha. India is among those very few countries where there is easy distribution; the newspapers are delivered at the doorstep. The competitive pricing of newspapers is also the cheapest in the world.

A third reason charted in the report is the impact of education. As India becomes more educated, the readership and hence circulation is only going to grow further. Girish Agarwal, Non-Executive Director, Dainik Bhaskar, said, “Still, today, among the people who can read and those who actually read a newspaper, there is a gap of about 50 per cent, which tells us about a lot of scope. Add to this, the literacy rate, which will only go up. These will boost the industry further.”

Sinha said, “One more important reason is that newspapers offer a great amount of credibility and integrity, compared to any other medium that we know of.”

The report mentions that India’s economic growth is an added advantage. It is believed that the growth of newspapers in India is directly related to urbanisation leading to higher aspirations and heightened interest in buying assets. Reading newspaper as a part of daily routine combines well with ease of reading at your own time.

Some of the other reasons include customised sections and pullouts that cater to various segments of readers together with localised content.

Sinha pointed out that daily newspapers are the backbone of this industry as 5.6 crore out of the total 6.2 crore copies per day is coming from the newspapers. He explained why the overall growth of 4.87 per cent is huge, “The base of print is very big and a growth of 4.87 is huge on a base of 3.91 crore. The industry might also double in the next seven to eight years. The ad revenues for TV and print currently stand very neck and neck at about Rs 201.2 billion, as per the KPMG report.”

Agarwal also spoke about the phenomenal growth of the industry and the scope of further development.

He started off by congratulating the newspapers for a five per cent increase in paid circulation. He added, “This has happened with a higher cover price. About 10 years back, the cover price was Rs 1-1.5 per copy. The cover price today is at Rs 4-7 per newspaper, which means the monthly bills have also gone up from Rs 60 to about 300-350. Think of any category -- FMCG, mobiles, electronics and automobiles-- where the price has also increased by about 10 per cent y-o-y, along with the increase in demand by five per cent y-o-y.”

The penetration of the media platform was applauded by Agarwal who said a lot of effort had been taken to build the reach. He said, “Earlier, the limitations restricted the newspapers to the urban areas. In order to expand the reach, about Rs 5,000 crore has been pumped into the market by the publishers in last 15 years, by launching in new markets and launching new publications.”

Sandip Tarkas, former President, Customer Strategy, Future Group, also pointed out his inferences on the report. “Advertisers usually use the currency -- readership -- to evaluate but circulation is a very important parameter. In earlier days, when media planners had more time to invest, they would compare circulation to readership, to understand viewers per copy. Readership typically comes with a lag but circulation is very instant.”

Industry experts explained why the growth of English publications is stunted at 2.87 per cent CAGR compared to regional media.

Agarwal said, “There is India beyond metros and big cities. It is only here that most people are well versed in English. Back there, in our market, people have a problem speaking the language. Even the businessman who is deciding about his dollar or say million dollars does the deal in his own language.”

Among the top 10 publications in the country, only one English newspaper -- The Times of India – figures in the list.

I Venkat, Director, Eenadu and Chairman, ABC also pointed out, “For lot of historic and economic reasons, English has largely restricted itself to metros, mini-metros and smaller towns. About 60 per cent of the language circulation is coming from non-metros and non-urban area, where English is not able to reach. Plus, literacy is growing in mother-tongues.”

Agarwal said, “In last 10 years, the shift is happening. Advertisers have realised with time that there is a potential sitting in Assam or Karnataka or Kerala.”

Venkat supported Agarwal, “Some of the leading language (vernacular) publications have actually come at par with the English publications in terms of rates. If you go back 10 years, it was not even 10 per cent. Even the categories have come aboard and embraced the language publications.”

While digital is growing big and a lot of people feel that it is a threat to print, the media owners are not looking troubled by the thought. The world is preparing for coexistence. As Sinha concludes, “There is a new medium coming in and everyone thinks that it is fashionable to come under digital, which is good. But this medium (print) is growing, it’s robust.”

Agarwal went back in time and pointed out how the same question was asked when TV was coming in. “But there is a huge potential and scope of co-existence in India. Also, this growth on digital is on free data. As soon as it becomes a paid service, the number might dwindle. Plus, all the newspapers are realising that in addition to serving the news in the morning, they need to also keep in touch with the reader and update on the news during the day, through the internet. We are working on it, but revenues are not even single digit for any of the players.”