Conceptualised by Social Kinnect, the ad film talks about protecting your loved ones while time is still on your side 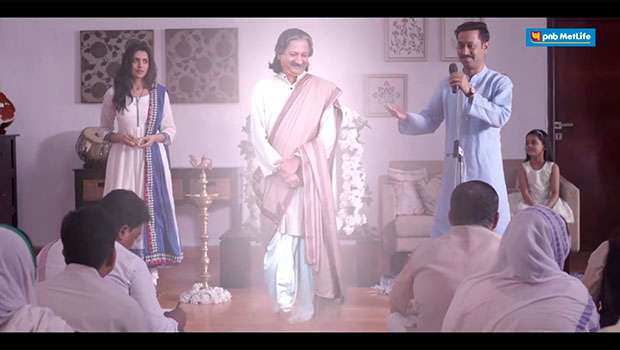 The last time PNB MetLife made an appearance on our television screens, it regaled the viewers with a story about a magician and a magic trick gone awry. The film went on to garner more than 4.3million views digitally and won a Bronze in the Film Category at the Spike Asia 2016.

Taking their tack of using humour to talk about a rather sombre subject like life insurance further, the company is back with another communication that plays on the guilty conscience of a ghost to remind people about taking action when time is still on their side.

Conceptualised by Social Kinnect, the ad film opens with a son celebrating a year of being protected by his ‘swarg vasi’ father. The son is being haunted by his father’s ghost who is suffering from a guilty conscience. Unable to protect his family while he was still alive, the father, now a ghost, goes the extra mile to protect his son and his family. Some of the things that he is shown doing to ‘protect’ his family are using fire extinguisher on the gas burner, snatching an ice-cream from his granddaughter and making his son wear a helmet while driving.

Speaking about the campaign and the consumer in-sight that led to the making of the film, Pooja Garg Khan, Head, Corporate Affairs and Communications, PNB MetLife, said, “An insight into the consumer mindset in India showed that consumers view insurance as an investment tool rather than a safety net in case of any untoward incident. Hence #MakeTime is a reflection of the modern fast-paced world that we live in today where people tend to ignore the most basic to-dos in life and are too busy to give priority to the right things at the right time.”

“The campaign is an extension of the communication theme we adopted last year – ‘Protect yourself to protect your loved ones’. Extending that thought, we launched our new film stating the need to find time to pay attention to important details in life,” she added.

Talking about the concept of a ‘ghost with a guilt’, Rohan Mehta, CEO, Social Kinnect, said, “Our thinking for PNB Metlife always starts from a very unexpected corner as compared to any other life insurance brand. We were grappling with a couple of interesting concepts when the client threw a very interesting concept of a 'ghost with a guilt' at us. The sheer concept was so exciting that it took us less than an hour to write the entire script and put the wheels into motion. The concept and the script were striking a chord with everyone at the onset. These were enough encouraging signs for us to go all in.”

Mehta admits that there were quite a few hurdles they had to face when executing the idea.

“The unique challenge with something that is liked by everyone is the executional details. Every stakeholder connected so well with the script that we were showered with suggestions left, right and centre. The challenge in such a case is to filter the suggestions and follow the vision of the core stakeholders who visualised the story coming alive from start to end. Another challenge for this film was the VFX and casting. These two elements could make or break the film and our production team has worked hard to ensure that the VFX and casting are top notch. We can proudly say that we wouldn't have wanted the film to have looked any different from what it is today!” said Mehta.

Commenting on why they chose the quirky path again, Khan said, “In June last year, we launched our brand film to spread awareness about the importance of getting insured. Using a quirky and light-hearted tone, we talked about how anything can happen in life, so it’s better to be insured always. The film was well received by audiences. Factoring in learnings from that campaign, we felt it was necessary to adopt a quirky and light-hearted tone since it seemed to work well for us from a content and engagement perspective. The new communication tone laced with humour fared us excellent social engagement scores.”

The use of humour had indeed worked for the brand but how difficult is it to create communication in this category and why do they think humour lends itself so well to this category?

“With consumers viewing insurance as a mere investment tool rather than a protection gain, it is quite an uphill task to change that mindset. Humour helps draw attention towards an otherwise very serious category, one that is tasked with spreading awareness about the importance of financial planning to stay protected against the many uncertainties of life. More importantly, humour opens up avenues for us to able to serve the audience with content they are more likely to read thereby breaking the monotony in communication present across the industry. With brands vying and competing to find a unique voice for themselves, PNB MetLife has set itself apart by adopting a humorous tone with engaging content,” said Garg.