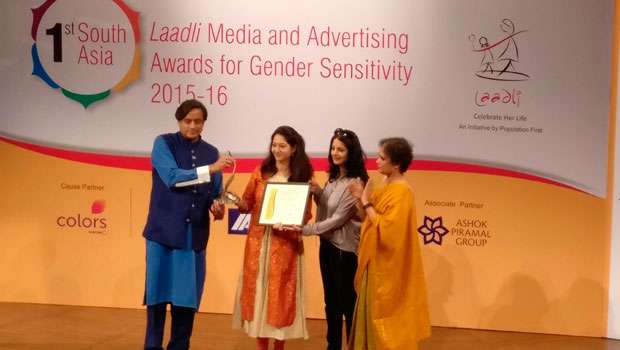 Population First, with the support of India’s leading entertainment channel Colors Viacom 18, International Advertising Association (IAA) and UNFPA India, announced the winners of the First South Asia Laadli Media and Advertising Awards for Gender Sensitivity 2015-16 on May 12, 2017 at Tata Theatre, NCPA. The awards were presented by the Chief Guest of the event, Shashi Tharoor, MP.

The current edition of Laadli Media Awards, which is one-of-its-kind awards on gender issues, had for the first time invited entries from five South Asian nations with the support of IAA. The entries were invited and the best were chosen from five nations – Pakistan, Bangladesh, Sri Lanka, Mauritius and Nepal.

AL Sharada, Director of Population First and the driving force behind the Laadli campaign, said, “From a mere 100 entries in 2007 to more than 1,500 entries in 2015, Laadli Media Awards have come a long way in acknowledging the media’s contribution in women empowerment and gender issues. Today with the expansion of Laadli to other developing nations through the support of IAA, we look forward to stories pertaining to gender from five South Asian countries. We hope to continue this momentum, and create a long standing impact of changing the society riddled with patriarchal mindset.”

The South Asia Laadli Media & Advertising Award for Gender Sensitivity 2015-16 for the category ‘Best Short Film’ was given to Radhika Puri for her short film ‘Water Wives’ which digs into the existing system of husbands marrying multiple times in order to have wives double as labourers to fetch water.

The award for ‘Books in the Novella’ category was given to Volga for her book Liberation of Sita published by Harper Collins.

The award for ‘Films’ was given to one of the most appreciated film ‘Parched’ and ‘Neel Battey Sannatta’.

The ‘Best Campaign’ was given to ‘Vicks’ for its brilliant portrayal of third gender. The Laadli Media Award for ‘Game Changer’ is given to ‘Nayi Soch’ by Star India.

The ‘Best Play’ category went to ‘Shikhandi’, the story of the In-betweens, written and directed by Faezeh Jalali.

The Lifetime Achievement Award was given to Kamla Bhasin, renowned women’s rights activist.