Malayalam leads among magazines with 1.610 million copies, Dainik Jagran and Dainik Bhaskar at No. 1 and 2 among top 10 publications 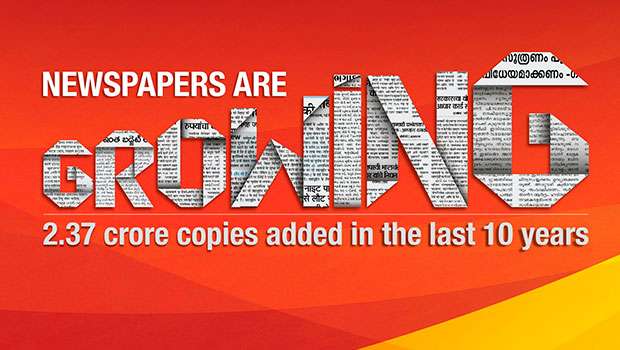 The Audit Bureau of Circulation’s (ABC) report released on May 8 says Hindi publications witnessed the highest growth with a CAGR (compound annual growth rate) of 8.76 per cent between 2006 and 2016. Telugu was the second fastest growing with a CAGR of 8.28 per cent and English stood at No. 5, clocking a 2.87 per cent CAGR.

The report suggested newspapers are thinking along the lines of greater local news coverage in order to cater to every segment of consumers as well as readers.

ABC certifies a total of 967 publications, of which 910 are daily/ weekly newspapers and 57 are magazines. Publishers voluntarily enrol themselves as members of ABC to get their circulation figures audited. Founded in 1948, ABC is also the founder member of International Federation of Audit Bureaux of Certification (IFABC) since 1963.

In the last 10 years, about 2.37 crore copies have been added with an increase of 251 publishing centres in India. The latest report also mentions that the average copies per day in 2006 were 3.91 crore, which has grown to 6.28 crore in 2016. The number of publishing centres has grown from 659 to 910 in the same period.

Speaking about languages, Malayalam led the flock among the magazines with 1.610 million copies, out of the total 4.528 million copies. Hindi followed with 899 million and Telugu stood third with 470 million average copies. Considering the zone-wise growth, north zone has seen the maximum growth with 7.83 per cent CAGR, closely followed by south zone with 4.95 per cent CAGR. West and east zones clocked CAGRs of 2.81 per cent and 2.63 per cent, respectively. In India, regional language newspapers have largely contributed to the growth.