The animated series features all new original stories and is directed by acclaimed filmmaker SS Rajamouli, Graphic India and Arka Mediaworks. The channel has experimented with animation series with Chhoti Anandi, which is believed to have showed great traction for a Sunday morning slot 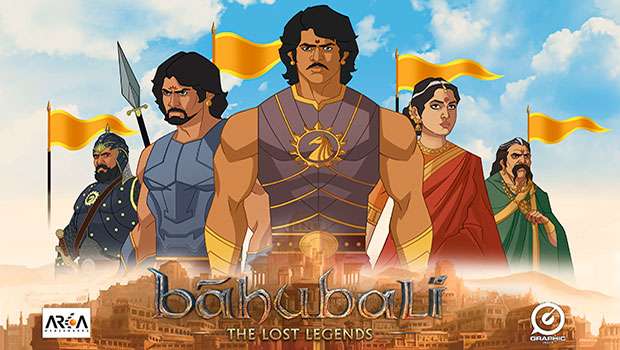 Baahubali’s popularity and fan following has taken everyone by storm. Colors, the Hindi GEC from Viacom18, has also announced its plans to leverage on this popularity, albeit with a twist. The GEC has procured the broadcast satellite rights of the animated series Baahubali: The Lost Legends, which is a spin-off of the popular franchise. Targeted at all age groups -- anyone from 8-80 years of age, the channel believes that anybody who has enjoyed watching the film will also enjoy the series.

Animation is not a hindrance in attracting the audience from across the age-groups. The animated series features all new original stories and is directed by acclaimed filmmaker SS Rajamouli, Graphic India and Arka Mediaworks.

The channel has experimented with animation series with Chhoti Anandi, which is believed to have showed great traction for a Sunday morning slot. Even if the channel is targeting all age groups with this series, this will surely give Colors an upper hand in attracting more children than a normal GEC. However, whether to put it on kids’ time slot (4-8pm) or the normal GEC time slot (7-11pm) is not yet decided. The channel will be in a better position to decide the time slot closer to the premiere date.

Though children are certain to be fascinated by the series, will a GEC be able to attract enough young audiences? Colors has done it before. The historical and mythological shows like Chakravartin Samrat Ashoka and Karmphal Data Shani, which featured child actors as the protagonist, did attract a lot of kids, thereby promoting cohesive viewing.

Commenting on the acquisition of the rights, Raj Nayak, COO, Viacom18, said, “Baahubali has proved to be a landmark film in the history of Indian cinema. Its success is nothing short of a case study for the Indian filmmakers. We at Colors pride ourselves for knowing the pulse of our viewers. Going by the ripples that this masterpiece has generated nationwide, we thought this was the right time to bring to our television audiences the folklores of ‘Baahubali’, which have been captured stunningly in this animated series.”

Given the popularity and high standards that the movie has set, how well can the animated series garner similar eyeballs and praise? Animated series have an appeal of their own. The product is great in terms of look and feel, backed by great storytelling and legendary characters which have proved themselves at the box office.

Nayak added, “Graphic India’s show has tremendous appeal among the viewers as it cuts across age groups and stands out in the cluttered environment. Baahubali with its storyline and characters has created an entire ecosystem that can translate beyond the silver screen and make for excellent content in other mediums. The animated version is just an attempt towards that direction and we’re sure it will mesmerise the TV viewers.”

Baahubali: The Lost Legends has been created by S.S. Rajamouli, Sharad Devarajan and Arka Mediaworks, who are the producers, along with series lead writer, Ashwin Pande and Jeevan J. Kang, EVP, Creative, Graphic India and the lead character designer for the new animated series.

Rajamouli said, "The reach of television as a medium in India is extraordinary, and we’re thrilled to partner with Raj Nayak and Colors to bring the untold stories of the Mahishmati Kingdom to the television audiences. Our creation of the series with Graphic India and Sharad Devarajan was formed on the idea that we could launch an animated series that would go beyond just kids. With the Colors’ distribution platform, we will be able to bring Baahubali -- The Lost Legends to the millions of people in India from ages eight to eighty.”

Echoing similar sentiments, Shobu Yarlagadda, CEO, Arka Mediaworks, said, “We are delighted that Colors is collaborating with Arka Mediaworks and Graphic India to bring the Baahubali animated series to television. The paradigm shift that Baahubali has brought into the entertainment industry is truly inspiring for all of us, and now with ‘Baahubali: The Lost Legends’ fans of the film can continue to live the journey of Baahubali, Bhallaladeva and all their other favourite characters.”

Sharad Devarajan, Co-Founder and CEO, Graphic India, said, “The epic storytelling and ground-breaking visuals that Rajamouli created captivated millions, and the future of Indian cinema shall now always be defined as ‘before Baahubali’ and ‘after Baahubali’. We are honoured to work with Nayak and the amazing team at Colors to bring these new stories of Baahubali to television audiences across the country.”