The story behind Patanjali’s ad blitz on news genre

The company is believed to buy about 25 per cent inventory on each of the top news channels. BestMediaInfo.com spoke to a cross section of the industry to understand Patanjali’s advertising strategy 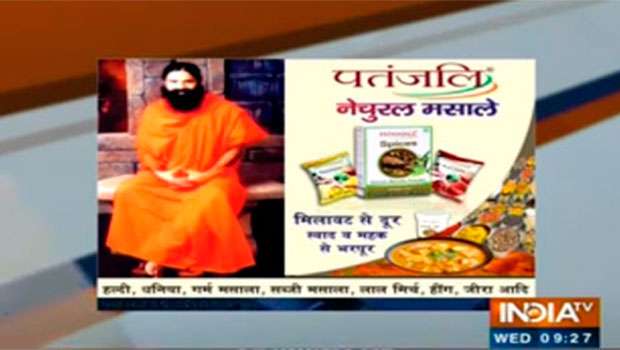 Speaking at Goafest 2017, Acharya Balakrishna, CEO, Patanjali, revealed the company’s ambition of becoming a Rs 10,000-crore giant. Let’s look at the disruption the brand has caused in the television advertising spending pattern, especially on the news genre.

Patanjali started advertising much after it launched various products in the market. Though being present with ayurvedic medicinal products and the much popular amla-aloevera juices, the company took a while before coming out with a communication to reach out to consumers.

Around October 2015, Patanjali entered the advertising business with a bang. It did a lot of things that made heads turn — the creatives of the ads, the media plan and the carpet-bombing of ads. The biggest stars were its founders — Baba Ramdev and Balakrishna. As time passed, the BARC India ratings, week on week, exemplified the number of Impressions that the brand was buying out on television.

That gave rise to an argument: is the company really buying effective ad slots or is it playing on the cheaper frequency slots? While one can see a plethora of ads by the company on all genres of television channels, most are seen on news channels. Recently, as it was seen, a lot of major FMCG players, the other big daddies of the category, have decreased their spends and volumes of ads on the news genre.

BestMediaInfo.com spoke to a cross section of the industry — media planners and buyers, brand owners, Patanjali and news channels — to understand what has prompted this de-growth. Not many people were comfortable discussing the matter openly since it is about revenue, monies and strategy, but we managed to draw out an analysis based on all the conversations we had.

To start with, according to BARC India data sourced by an industry observer, before the launch of Patanjali’s advertising on television, the free commercial time (FCT) bought by the top 20 FMCG sector advertisers on Hindi News was 759,765 seconds in September 2015. In contrast, the FCT in March 2017 for the same 20 advertisers was 1,021,408 seconds – showing a huge jump.

In addition, a pattern also shows how some of the big players such as Emami Limited, ITC, DS Group, Marico Limited, P&G, Godrej Consumer Products, Dabur and Kellogs have decreased their spends from September 2015 and March 2017. Against this, Patanjali increased the ad seconds from zero in September 2016 to 258,921 seconds in March 2017.

“There can be various reasons to this. The season of advertising is different for different product ranges of these companies. For example, beverages have normally decreased their spends on the news genre, but if you compare September of any year to March of any year, the beverages spends will show a rise in the spending pattern. Having said that, it is true that Patanjali’s entry has disrupted the buying of the news genre,” said an industry expert on condition of anonymity.

If one believes the marketers, Patanjali has created a lot of clutter in the space and the viewing experience is getting disturbed. So much so is the impact that the number of seconds of advertising per hour is also rising.

“The news genre has a lot of clutter these days. There are too many ads of same brands and the commercial time is also quite high (as much as 22 minutes per hour). We would rather prefer buying airtime on a GEC, which has less clutter and the ads are also capped at 12 minutes per hour. We don’t want to be in a cluttered environment of news wherein the programming content also has a lot of L-bands and other advertising formats. The visibility of my brand will become very low in such a cluttered place,” said a competing brand head on condition of anonymity.

A lot of planners said Patanjali buys as much as 25 per cent of the total ad inventory on each of the news channels, at nearly Rs 50-60 crore. If this is true, then consider that all the other categories (auto, BFSI, local advertisers and e-commerce) — the rest of the players in the FMCG category have to adjust in the rest of the 75 per cent commercial airtime.

Why so much weightage on news? SK Tijarawala, spokesperson of Patanjali said, “We do our own optimum plan where we drive the impact. We do not believe in advertising. We rather believe in information and education. We do information campaigns. We are simply updating and sending the information across the markets just because they are not aware of what they should consume. This is the basis of our strategy to talk about the facts and truth.”

He said Patanjali’s target audience is very active on the genre. “The news viewers are the decision makers and information is also a form of news. So, it travels best through the news media. So, if there is a report saying there are harmful substances in a beverage, it will appear on the news medium, not the GEC media. The same kinds of facts are being given out by us, so it should travel through news medium.”

The other FMCG players are apparently decreasing their spends on the genre, agreed a few planners. But there can be other reasons too for decreasing the spends. A major FMCG player, on condition of anonymity, said, “Typically, if you look at most of the FMCG players, it is a female oriented genre. One will buy news only for a new update/ launch. Most of the FMCG brands target females, while news is a hardcore male viewership driver. Barring a few products like deodorants, FMCG is not looking at news very seriously.”

It is also true that news is a very easy, convenient and cost effective entry point on television for most of the advertisers as they upgrade from print. As per a senior media buyer, when Patanjali started, as it had limited budget for television, by default it hopped onto the news genre. It found success over there and started investing more. “Now, even after growing its business manifold and starting to advertise on the GECs, for some strange reason, it continued with its commitment for the news genre.”

By that logic, it will make sense for the company to opt for the news genre as it has a product range that is targeted at both men and women equally. In the Hindi heartland, where FMCG has a disproportionate amount of market, purchases are done by men, but in the metros, it’s by both. By that perspective, it looks like everything is working well for Patanjali. Taking a closer look at the ads, Patanjali heavily advertises mustard oil, Dant Kanti (toothpaste) and juices news channels, while on GECs, it advertises biscuits, rice, Dant Kanti and cow ghee.

Answering why other brands would shy away from coming on to news channels, Tijarawala said, “Patanjali advertises on news channels because we have a lot of information to share and a lot of education to provide. Our competitors don’t have any education to extend to the consumers. Hence, there is nothing that they can talk about. Some brand launched an ayurvedic hair oil and used triphala in it. Everyone knows triphala is used for healthy digestion. Ayurveda is not understood by them, but they still want to talk about it.”

He went on to explain the changing strategies of brand owners. He said, “Things like salt, neem and coal that were criticised by these companies in the initial days have now become ingredients of their products. They are also reinventing their product lines and strategies because they also have to fall in line with what is healthy for the consumer. Let them decide whether they want to change things or keep serving the consumer products that are not good for them.”

Having said all of this, it is true that the news channels have been a cost effective medium and that the rates on these channels are negotiable to a larger extent. But why is clutter from a single brand allowed?

A senior official of one of the top five Hindi news channels said, “There is another side of the coin. FMCG players used to take the genre for granted to such an extent that they would always buy at very low rates, because there are high volumes involved. Here is a brand that buys ad slots on a decent price and we find it more affordable. We run the ads from other FMCG players but we sell at our (preferable) rates. Due to Patanjali, they are losing bargaining power, while Patanjali is buying from us at rates closer to our effective rates. There is no surplus airtime due to Patanjali’s extensive consumption of inventory, so why will we sell it for peanuts?”

To this, one media planner argued saying that what will happen if one day Patanjali decides to pull out advertising due to any reason? Would news channels be in a trouble then?

To this a channel head responded on condition of anonymity, “Dependence on Patanjali is not dangerous. If tomorrow, Patanjali’s ad volumes start dwindling, the FMCG as a category, its requirement won’t go down. They will still need to advertise, it’s a symbiotic relationship. They can’t really sustain without advertising and they will keep on innovating the products and hence, will need consistent communication. There is no ego issue here, it is about the pricing model and demand-supply ratio. If need be, we will sit across the table with the marketers and re-negotiate. If the demand will go down, prices will also go down. Demand is high right now, and we can’t go down on rates.”

Another channel head denied the possibility of Patanjali decreasing its ads. “They were spending anywhere around Rs 50-60 crore on the channel. Now, for the new fiscal, we have been asked to prepare a plan with at least 25 per cent more budget. It doesn’t look like the brand is anywhere close to decreasing advertising on TV as yet.”

While speaking about the cost effectiveness of the genre, another brand head agreed that it helps since the rates are lower and the reach is wider. “But reach is delivered by a lot of genres and that’s why we are present in other genres as well. But if you buy such a large inventory on any genre, the domination increases and so does the visibility. Although from the cost per rating point (CPRP) point of view, the news channels are about eight times costlier than a regular GEC channel. FTA Hindi GECs are cheaper from CPRP levels. We are buying GECs, movies and others. News channels don’t generally sell on prime time basis. They spread their risk and inventory across the day. Important thing is that their (one particular brand’s) presence is intimidatingly high on these channels.”