Goafest 2017 kicks off in style 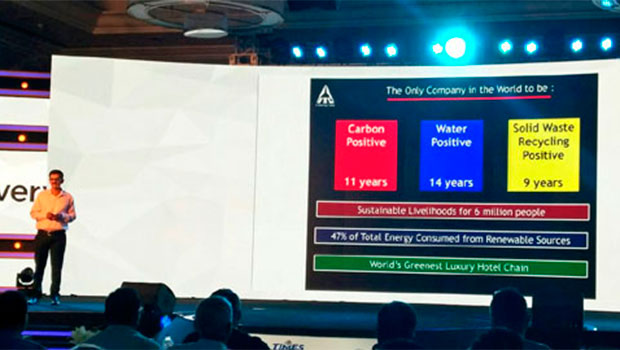 The much-awaited Goafest kicked off in style in the land of sun and beaches on April 6, 2017. Day one saw inaugural speeches by Ashish Bhasin, Chairman and Chief Executive, Dentsu Aegis Network South Asia, and Raj Nayak, Chief Executive Officer, Colors. This was followed by a power-packed Industry Conclave where bigwigs such as Hemant Malik, Divisional Chief Executive, Foods Business, ITC Limited, and Acharya Balkrishna, CEO Patanjali Ayurved, shared their two bits on everything from branding to effective communication.

Bhasin, in his inaugural speech, spoke about what makes Goafest different and how they endeavour every year to go a notch higher.

“This is a journey we started 12 years ago and we have been adding value to it and making it bigger as the years go by. This year, you are going to see a lot of things that you saw last year but also a lot of new and different things. This year we have tried to make Goafest a little more digital in keeping with times. You are all aware of the Goafest app. There will be a lot of digital speakers and the digital awards have really taken off.”

Goafest is going green this year and speaking about the initiatives being taken to ensure the fest is environment friendly, Bhasin, said, “By partnering with National Geographic, Goafest has tried to go green in a small way. You all will see some water conservation efforts and all the schedules and badges have been made out of recycle paper. We have taken some measures because we believe that this is our responsibility and we must do it.”

“Besides going green, we have tried to do some good. Led by Ramesh Narayan, we ran a gender sensitivity campaign the winners of which will be felicitated during Goafest. Ad Club and the AAAI will fund the production of the winning campaign,” added Bhasin.

Nayak pointed out how Goafest is the world’s largest advertising festival organised by any industry body.

Nayak spoke about how the fest started as a creative festival a few years back and has now become so much more.

“Goafest started as a creative awards a few years back but over the last few years, it has evolved into a festival. It is not just creatives today, it has got digital, print, television and all kinds of awards. There is a lot more networking and we subsidise for professionals below the age of 30. The last thing I want to say is that every professional in our country who has made a name for himself or herself is made of Abbys,” said Nayak.

“As advertisers, many here may feel that they are changing India but as a marketer I can only speak about the role brands are playing in this changing India,” said Malik.

Speaking about the pillars of brand building in this changing India, Malik said, “Communication is only one of the pillars of brand building. A couple of other pillars that we look at in terms of building the brand are supply chain, logistics, the product and packaging, pricing and promotion, all of these factors contribute towards creating a brand.”

The first day at Goafest ended with a thought provoking and thoroughly entertaining session by Acharya Balkrishna who brought the audience to their feet by his uninhibited views on brand building and advertising.