From Bhutan to Darjeeling to Delhi if there has been one constant in Nima Namchu’s life then it is music. Namchu talks about his musical upbringing and how music lets him time travel 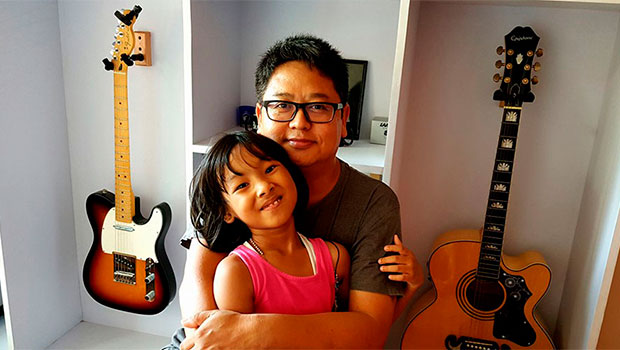 Surrounded by older siblings and relatives who were interested in music, Nima Namchu, CCO, Havas Worldwide, has had quite a musical upbringing.

“I grew up surrounded by older siblings, my uncles and my dad, all listening to music. I was probably five or four or even younger when I first heard somebody sing a Dylan song.”

Growing up in Bhutan, according to Namchu, had a big part to play in the love he displayed towards music from an early age.

“I grew up in Bhutan and during those days there wasn’t much there. No TV, movies from Bollywood and Hollywood arrived months, even years, after they were released. And once they got there, they would play on for a few months before a new one came along. All we had was radio. Actually, just one government-sponsored radio station which used to play a half an hour to 40 minutes’ programme every weekend. An English lady named Louise (who happens to be Kelly Dorji’s mum) hosted the English bit of the programme and she would play popular western music that everyone looked forward to. I guess that is how my love for music started because back then we did not have much else to entertain ourselves with.”

Namchu was only four when he was asked to sing his first solo song in school but it still wasn’t anything serious. Music really became a part of him when he came back to India in the early 80s.

“We came back to Kalimpong in Darjeeling and I joined a catholic boys’ school. There were two high points in the school year, one was the sports day and the other the annual day. Sports day was the day when all the sports boys could shine and the annual day was the day where all the rest could perform in plays or sing and things like that. Now it turns out that I wasn’t much of a sportsperson like the rest of my siblings and cousins and that is when I decided I should probably learn the guitar.”

That is how Namchu found himself taking guitar classes. It was also around the time that he discovered he could also sing and started focusing on vocals.

“Back in the hills, everyone was listening to music. While we did not have MTV and Channel V back then, we had cassettes. With just a limited number of those boxes circulating around town, invariably everybody ended up listening to the same kind of music and dreaming of becoming a rock star.”

His dream of becoming a musician continued through college but it ended when he landed in Delhi and embarked on his career in advertising. It was the early 2000s when music entered his life again.

“A bunch of my friends and a few people I knew got together and we used to perform in a pub in New Friends Colony in Delhi.  Almost every Friday and Saturday we would play for a couple of hours, just old familiar songs. But that too stopped.”

“I discovered SoundCloud sometime after we stopped playing at the pub. It was also around this time that the Mac came into play and I discovered that you could record stuff at home. In the meantime, I had some friends who had become professional musicians and they helped me with buying equipment for home recording and helped set up a basic studio at home.”

When he got married, his wife gifted him guitars once in a while.

“She knew that I liked music and so every anniversary or birthday a guitar would be presented to me. When I started to see so many guitars around me, I thought I should get a little more serious about my music. It was then that I upped my music game. I started rehearsing, recording songs and putting them online.”

A self-confessed social media enthusiast, Namchu has been posting videos of himself singing covers of some of his favourite songs for quite some time now.

“I have been pretty active on social media ever since it started. Mostly, I upload audio tracks and not necessarily videos. I have some regular listeners who follow me but mostly I bombard people I know by tagging them until they say they like it,” laughs Namchu.

Sharing an instance when one of his covers got mentioned on a website, Namchu said, “A couple of years ago I had done a cover of a Cohen song called ‘Tower of song’ and I uploaded it on SoundCloud. It was picked up by a website which basically picks the five best cover versions of any song. I don’t know how big that website is but it was cool to find my name next to some big established stars.”

Recently, Namchu took to stage again when his friend finally convinced him to perform live at a Leonard Cohen tribute gig.

“A friend of mine has been after me to perform live and finally I agreed. A few months ago there was a Leonard Cohen tribute gig that was taking place and I, along with two other musicians, performed there. I had a set list of five to six songs and the response was good. A few artist managers approached me asking if I was interested in doing this full time. I obviously had to tell them I have full time job in advertising.”

Member of a band called ‘Thrash’ back in school that despite their heavy-metal sounding name mostly played Beatles, Namchu today prefers Blues more.

“Personally, I don’t think I am much of a guitarist. But I like to play the Blues.”

Blues, classic rock and folk rock are the genres that he likes to listen to now and is a huge fan of song writers.

“Jackson Browne is a fantastic singer and song-writer and like his work. The Rolling Stones were also another favourite of mine.”

Namchu has also written and composed a few originals and finds that writing comes more easily to him than composing.

“I have written and composed five to six songs but I am not confident about putting them out in the public domain. The first one that I put up was really liked by everyone so now the stakes are high.”

And what does music really mean to him?

“It is time travel for me actually, which is why I probably do more covers than I do originals. Every song takes you to a person, a place and a time. So music is sort of an escape hatch for me.”