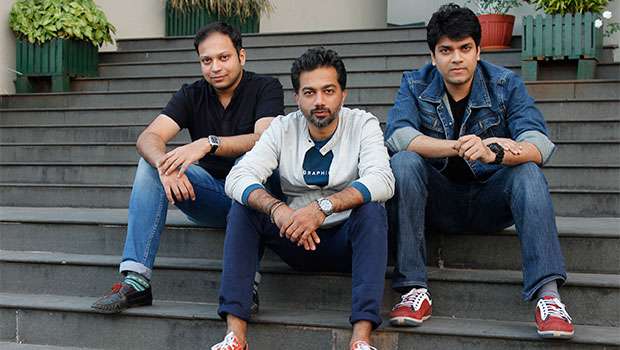 Ninad Umargekar (centre) with his partners

For someone who is working so closely with arts and artists, Ninad Umargekar, Co-founder, Onewall, doesn’t consider himself an artist. “Now that I have gotten into arts, I think I am not an artist. But I used to think I was one when I was a kid. All children are artists in that sense.”

But he has a great vision of what art can do. And he gave up his ten-rear career in advertising to pursue his dream. Umargekar spent six years at Lintas before moving to Taproot Dentsu.

Raised in a village called Atali near Kalyan, Maharashtra, Umargekar may not have been the most talented artist in his class but he had a creative streak in him.

“I grew up in a village and therefore my pursuits as a kid were different from that of children who grow up in big cities. I used to go fishing; I have seen snakes all around. Our village also did not have proper sanitation and therefore we had gone outside to do our morning chores in the open but I think those experiences has built this creative streak in me because I have seen nature so up and close.”

There is a quirky quote that goes something like this, “I was born intelligent, but education ruined me.” Something similar happened to Umargekar. The little boy from a little village in Maharashtra went and got himself proper English education and the creative aspects of his life took a backseat while the conventional aspects of his life slid into the driver’s seat.

“Art was never in my agenda as a career. My parents wanted me to do something else with my life and I wanted to join the armed forces but I ended up in advertising. Even in advertising I was never close to any of art directors. I think art and design is gaining significance now but during my early days in advertising – and I am talking about the late 2000s here – art was still considered as a support function to copy. That is the reason why art directors were never the hotshot guys. I never even had a close brush with any art director in my advertising days as well.”

But slowly, as the years passed by, Umargekar started wanting to explore art and even he can’t put a time and date to why and how this need got to him.

“I started visiting art galleries but I realised that I couldn’t buy that art. The art in these galleries was extremely expensive. Then, on one of my visits to Thailand, I found art there that was quite inexpensive and I found some really good pieces of art there. I got thinking that such art might exist in India and started to question why the common man was not buying art.”

While this question was there somewhere at the back of his mind, there was another niggling thought that was taking up space in his mind.

“I was going through this struggle of my own identity in advertising. I was a planner and planning was also considered a support function. There is a lot of sex appeal to planning but it is only in the books. When it comes to real life, the creatives were at the forefront. Being somebody who likes to lead I have never liked being in the backseat. So, the first thing I realised was that I needed to be in the forefront with ideas.”

An opportunity presented itself when he was working with Lowe Lintas as a planner. There he cracked an idea for the Coir Board of India.

Umargekar had identified that the problem with coir was that it was associated with doormats and that people did not know about the various types of art one could create with it.

“At Lowe we used to write change statement for brands. I wrote a change statement for the Coir Board of India, which was ‘Take coir from below the feet and put it in front of the eyes’. We then went and presented the idea to the client and they loved it. But it was a government body, the bureaucrat there changed and the idea just went into cold storage.”

This was five years ago and in many ways this ‘coir wall’ was the genesis of Onewall. But, as Umargekar started getting ahead in his advertising career, the idea of creating art on walls got relegated to the back of his mind.

“I have a very close friend called Swapneel Thakoor who runs a printing and fabrication business. One day we were just sitting, enjoying a drink and I told him about this idea. Since he was already in the visual merchandising business, I told him that we should run with it and promised him all my support and he was okay with exploring this idea.”

Two-three meetings down the line they jumped into it. A former colleague of Ninad was starting a cafe-cum-spa and was looking for an interior designer.

“We reached out to her and told her that we had started this new venture. She was okay with us taking a look and when we met her, we asked her what the thought really was. She told us that her brother used to run a spa and she was runner-up in Masterchef India, so they had thought of opening a cafe-cum-spa. But that was the product and she did not really have a thought. We told her that we would get back to her and then went back and looked at it like we would look at any advertising brief. There was a product and we had to make a brand out of it. So, there was the spa which implied healing and there was the cafe which implied indulgence. There were two forces at play here and ‘complimentary forces’ was the idea that came about and we designed the cafe-cum-spa on those lines.”

Umargekar was working as Head of Strategic Planning at Taproot Dentsu at the time of taking up this project. He eventually realised that he wanted to give his full attention and time to Onewall and took leave from Taproot Dentsu around the end of February 2017.

In Umargekar’s own words, Onewall is not a home decor company but an ideas company and that is what they have focused on from day one. The cafe-cum-spa was their first project. The next project they took up was for Outdoor Advertising Professionals. But today they have almost stopped taking up projects.

Talking about why they aren’t in a hurry to take the projects that are coming their way, Umargekar said, “We realised that projects won’t allow us to scale up. My vision is not to be another interior designer with ideas. My vision is to reach out to every single bare wall in the world and if that was my goal then this project-based model wasn’t going to led me to that goal. We realised that the best way to realise our vision was to create products.”

Umargekar realises that most middle-class homes today don’t have access to great art and another chink in the wall that he found was that nobody was marketing art to the young.

“My target really is the people in their late 20s. Nobody has as yet marketed art to them. Art is seen as a pursuit which happens only after you are 40. It isn’t a pursuit of true love anymore it has become a pursuit to show the world. Another reason I want to look at the people in their late 20s is that it is at this stage in life where your taste also starts to evolve a little and you want your home to reflect your identity.”

There are a lot of ideas that Onewall is dabbling with but the one thing all these ideas have in common is that their vision is to revolutionise the art world.

Talking about one such idea, Umargekar said, “One of the key thoughts that we are working with is why should we buy art and be stuck with it forever and therefore ‘Ever changing art’ is an important pillar in our endeavours to market art to the young. This thought led us to create frames that allow you to change your art. The frame and the art boards are fitted with Velcro which makes it easy for people to detach the art board from the frame and put another art board up. So we give this frame to you and you can keep on ordering art boards from us and keep on changing them as and when you like.”

Umargekar believes his advertising background has helped him in building Onewall.

“Our products are not run of the mill art products. Every product of ours has to have an idea, a story and a thought. Maybe somewhere my advertising background made me put that filter.”

One major problem that Umargekar sees in the art world today is the name game.

“According to me the art market has got completely messed up because of this obsession with names. People are paying crores for a name! I want to change all of that and therefore one of the pillars of Onewall is ‘no name’. We promote the art by the artist’s name but we don’t put it on the art itself. I want people to be delighted by art and people don’t get delighted by seeing names.”

Onewall is also a platform that gives amateur artists a chance to exhibit their talent and make a living out of it too. Today, Onewall has associations with around 40 artists and Umargekar was the one who encouraged many of them and gave them the confidence that their art was saleable.

While Umargekar is the one who looks after the brand’s vision and artist management, Thakoor leads product development and their third partner, Aditya Jayawant, heads operations and is leading the charge on their fabric and lighting offerings.

Umargekar believes that the real meaning of art has gotten lost somewhere along the way and he sees Onewall as an opportunity to show the world what art really means.

“The real meaning of art is visual delight and visual happiness and I think that meaning has gotten lost because art has become a pursuit of the wealthy instead of a visual delight product that anyone can buy and I want to change that.”

Tags: Ninad Umargekar After Hours
Advertisment
More from this section