The network will launch Times Now with the support of Bobbles Media GmbH DTH and OTT platforms in Europe. The network claims its international footprint will reach 10 million viewers in five continents 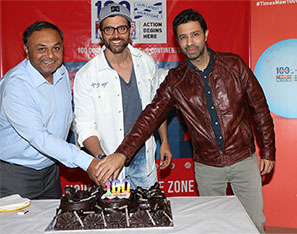 The network will launch Times Now with the support of Bobbles Media GmbH DTH and OTT platforms in Europe. The network claims its international footprint will reach 10 million viewers in five continents

With the launch of Times Now in Europe, the English news channel from Times Network is now available in 100 countries across the globe. The expansion is expected to add a potential audience of 1.4 million Indians in mainland Europe, including Belgium, Germany, France, Italy, Netherlands, Spain, Sweden, and Switzerland, to the network’s base.

The network claims the international footprint will now reach 10 million viewers in five continents. The network will launch Times Now with the support of Bobbles Media GmbH DTH and OTT platforms in Europe.

Recently, the network’s international business received the ‘Porter Prize for Strategy 2016’ from the Institute of Competitiveness, affiliated to the Harvard Business School, for ‘Creating Distinctive Value’. Bollywood star Hrithik Roshan joined in the celebrations by cutting a cake on the occasion in Mumbai recently.

M K Anand, MD and CEO, Times Network said, “Today, with India’s growing participation in international affairs, engaging with the Indian diaspora is equally important towards our economic development. I feel, as India’s leading English broadcast network, it’s the right time for us to create a global presence for ourselves and for our country. Through our approach towards television news journalism, which revolutionised the way news was presented in the country, we plan to represent a modern, vibrant, successful and vocal India to the world.”

Naveen Chandra, Head, International Business, Times Network, added, “This is truly a landmark achievement considering we were the last Indian TV network to begin international operations and have reached 100 countries in just a little over five years. From Times Now’s commercial launch in Australia in early 2011 to its launch in Western Europe in December last year, it has been an incredible journey. We have been a part of some of the largest global Indian events and built some of very effective enabling platforms for the diaspora’s engagement with India and for Indian brands to expand internationally. We are all set to launch our first local content initiatives in Europe and look forward to growing aggressively in the future.”