This is probably the lowest Adex growth prediction in last 3 years: CVL Srinivas

The major predictions in GroupM’s TYNY report suggest the continuous growth of print while the contribution of television is expected to decrease. Digital is also expected to grow, albeit less than in 2016. BestMediaInfo spoke to CVL Srinivas and Lakshmi Narasimhan for a deeper insight into the advertising spend forecast 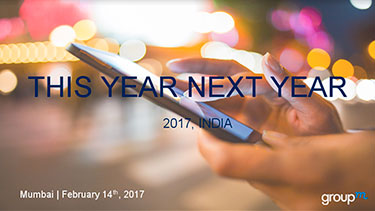 This is probably the lowest Adex growth prediction in last 3 years: CVL Srinivas

The major predictions in GroupM’s TYNY report suggest the continuous growth of print while the contribution of television is expected to decrease. Digital is also expected to grow, albeit less than in 2016. BestMediaInfo spoke to CVL Srinivas and Lakshmi Narasimhan for a deeper insight into the advertising spend forecast

Asked if this is the least growth seen in last few years, CVL Srinivas, CEO, GroupM South Asia, agreed, saying, “This is the lowest prediction in the last three years. It is partly because the base is big, but more because of many macro and micro economic factors.”

The economy itself is being a bit sluggish, the GDP forecasts are being scaled down and many sectors are facing pressures. He agreed that for a country of the size and potential of India, one would expect India to grow at a much faster pace. “It is closely linked to the overall economy and its performance. The minute we get back to an 8-9 per cent growth (for GDP), which may happen in the next year, we may see the Adex numbers going up to 15-20 per cent.”

The uniqueness of India was also quite peculiarly shown in the report. Srinivas said, “India is very unique in many respects – in some areas, we mirror some of the BRICS markets (Brazil, Russia, India, China and South Africa) while in some other areas we are closer to the US. For example, we have TV as a predominant medium just like in the US. Despite digital being a major media platform, TV continues to be holding on its own.”

About the Indian market, Lakshmi Narasimhan, Chief Growth Officer, GroupM, pointed out the kind of scope that it provides vis-à-vis the other markets. He explained, “Despite a fast growing digital market, India still offers room for others to grow. For instance, if you are in the US or some other country whether growth rates are much slower, say 3-4 per cent, most of the media is saturated and you can only grow by degrading someone else. But India still offers significant relevance for everyone to grow. For every Rs 100 extra incremental that is coming, only 40 per cent is going to digital while 60 per cent is going to traditional.” This is against the global standards which shows that 80 is going towards digital for every incremental of Rs 100.

The major predictions in the report suggested the continuous growth of print. The contribution of television is expected to decrease compared to digital which is expected to grow, albeit less than 2016. The analysis of how the various advertising categories will perform has been immense. Best Media Info spoke to Srinivas and Narasimhan to understand the various aspects of the advertising spends and the expectations. Here are some of the inferences:

E-commerce is going through a consolidation phase. Till last year it was in a launch and growth phase and hence they spent a lot of money on advertising to build their brands. Today many of them are under profit pressures as many of them are getting consolidated/merged/acquired. Srinivas said, “They are going through a churn and hence are tightening their belts – either spending less or trying to get more for the same spends. Due to these changes, the sector will come out much stronger and very soon, it will contribute to about 10-12 per cent of the AdEx, against the current eight per cent.”

Within e-commerce, the mobile wallets category has obviously got a little impetus because of demonetisation. Also, as India moves towards a digital economy, you would see more of these players coming in and so e-commerce which earlier was more about the marketplaces and traditional players is now a mix of those and the fintech (finance technology) and payment solutions players.

Telecom is an interesting sector because of Jio’s entry which is aggressively trying to gain share while on the other hand, you have established players that have profit pressures. Srinivas said, “We are also seeing some consolidation happening in the space so the focus is to try and manage the business in terms of profits and so on. Like e-commerce, it is a sector that will emerge stronger in the short term with few brands emerging out strongly. Form the current contribution of about 6-7 per cent to the total Adex, it may grow to a 10 per cent.”

In a market like India, a lot of action is happening in the headset category. More high-end global brands are coming in and expanding their base, investing in manufacturing facilities. On the other hand, there are lower end phones that were earlier imported but now these players are also setting up manufacturing units here and expanding. Srinivas said, “This is mainly because India is the fastest growing market in the world for mobile handsets and it is going to remain like that for some more time to come.”

FMCG is the biggest advertising category with about 45 per cent contribution to the overall Adex. However, this number has come down from 45.5 per cent. But there are bright spots on both ends of the spectrum. Consider this – there are emerging local players and on the other hand, you have the larger established players that are coming in the market to target premium end of the market looking at launching products in the premium category, which makes it interesting since actions happening on both the ends.

Offline retail has decreased advertising spends in past few years partly because of the pressures that they are facing from e-commerce and partly because there is some consolidation happening in the space. Srinivas said, “Earlier, we had a long tail of advertisers while now a lot of them don’t exist. Some of them have been taken over by the larger brands. There would be four to five large national brands that will remain strong and will continue to actively advertise but compared to where we were five years ago, the number of players that actively advertise have decreased.”

To go into the regional market, distribution plays a vital role along with understanding the immense diversity in India. “The challenge for organisations is to have a pan-India strategy and hence the way most marketers go about is to test and learn. To take pilots, to take on fewer steps/ districts/ geographies and to perfect the model before expanding it to the larger geography. That’s way we have seen the build-up happening.”

India is very different from other markets as all media platforms are growing. TV has a large share of the Adex, it is still growing at eight per cent.

Despite a lot of inventory being created within television on the back of new channel launches and free to air (FTA) channels, isn’t the growth slow?

Print is also growing at 4.5 per cent, India being the only country that is seeing growth in the medium. The print growth is mostly coming from regional – both vernaculars and Hindi. English and business print has been under a lot of pressure. But the regional print players continue to perform well on the back of local advertisers and also lot of spending by the Government and this year, we are expecting sectors like auto and banking (which are all print heavy sectors) to help in bringing the estimated growth.

Digital has seen a marvellous growth and is expected to grow by 30 per cent in 2017. Asked where one can expect digital to be five years down the line, Narsimhan said, “If you look at screen advertising, which is TV+digital, it will be about 80 per cent, which used to be the case between TV+Print about three to four years back. What is also interesting is that in India a lot of print publishers are far more progressive and farsighted and hence are moving to digital. I think print has started building on alternative models and hence it might not be fighting for space in the remaining 20 per cent.”

Despite being small base, cinema is showing a growth rate of 20 per cent y-o-y, while outdoor is showing a double-digit growth. Narsimhan said, “In India, there is headroom to grow, no matter what format of media you own. Everything is ultimately converging to digital so whether you are a print or TV or cinema player, you need to have a digital platform and digital vision and you should move your brand or medium towards digital because that is where the consumer has already reached.”

Below the live (BTL) and activations are important while trying to target consumers in the rural markets and also in the urban areas, which are media dark (where there is not too much media reach). The advertises are really demanding a lot more ROI, wanting to know which activity is doing what to their business and brands. Srinivas added, "We use a lot more data and technology even in the activation space. Clients want solutions to positively impact their business, so measurement of the impact is very necessary.”

Vinit Karnik, Business Head, ESP Properties, has helped in putting together the significant trends that can be expected in the sports content and marketing fields. Karnik said, “An important trend in sports is while broadcast is going to be having a lion’s share, there will be other influencing factors where sports will be consumed just like – on digital, social and OTT (over-the-top). We already have the visibility of what Hotstar has recently announced. That itself is an indicator of which way the consumption or the consumer/ fan is going towards.”

GroupM also announced its latest tool – Sportswatch – for measurement of sports marketing and content. Karnik explained how the attempt is to scale it in terms of how various aspects can be added to it as a product. “We are looking at how we can make it more meaningful to the consumer. Whatever consumer studies we see in the market today, most of them talk about media value and that may not be the right way to interpret the popularity or the viewership of sports.”