After Hours: Rahul Jauhari and his organic terrace garden

In the daily grind of the corporate world, Rahul Jauhari, Chief Creative Officer, Rediffusion Y&R, has found a passion that not only enriches his soul but is also a promise for a better world 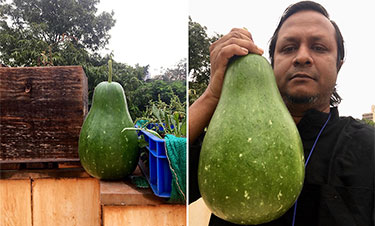 After Hours: Rahul Jauhari and his organic terrace garden

In the daily grind of the corporate world, Rahul Jauhari, Chief Creative Officer, Rediffusion Y&R, has found a passion that not only enriches his soul but is also a promise for a better world

“Advertising is a field where we work late and party hard. It has absolutely nothing to do with nature,” said Rahul Jauhari, Chief Creative Officer, Rediffusion Y&R, when I met him to write this story.

Ironically, what Jauhari said can be applied to almost all the jobs in the madding metros in India and the world over. The bustle of traffic, the plumes of smoke, the crunch of gravel are all a part and parcel of the city life. Green is a colour sighted fleeting in the crowd of grey that populates much of a city-dwellers everyday life. But Jauhari has made a green oasis for himself in this concrete desert.

“My younger sister is an organic baker by profession. She quit her corporate job to take this up. I got introduced to the concept of organic food through her. During our chats she would only speak about how many pesticides there are in our food.”

His love for all things organic came to his head when he was in Bengaluru. In today’s age and time when people don’t have the time, the money or even the space to maintain large farms, Jauhari met a bunch of people in Bengaluru, who had found alternative ways to grow food themselves on their rooftops and balconies.

“I found these rooftop and balcony gardens interesting. Probably because I have a green thumb by genetics. My mother was a very avid gardener. All through my childhood we have had kitchen gardens. Although I never actively did any gardening then, I picked up a lot by just watching. So, when I got into this, it came very naturally to me. A lot of the things I do now are things that I had seen my mother do then.”

During his time in Bengaluru, he met a lot of people who had rooftop organic gardens and visited a lot of farmer markets. On one such trip he bought a bunch of seeds on an impulse.

“The gentleman I bought my first seeds from is the one I still buy seeds from. I picked up a huge bunch of seeds from him that first time and came to Mumbai with them. I then set about buying the pots and mud for the seeds. The thing is when you do something for the first time, you do everything wrong, for a two rupee thing you will spend 20 rupees. So I went far and wide in search of the mud and pots.”

But Jauhari’s first brush with gardening was quite successful.

“Most of the food we buy is full of pesticides and we have no control over it. So, the ideal thing is to grow your own food. If you grow your own food, you know exactly what you are reaping because you know exactly what you are putting in the soil. I have a fairly well running terrace garden now. It doesn’t feed my family but the herbs are there and the basic veggies are taken care of. I grow tomatoes, cucumbers, spinach, etc. All of these are seasonal and by now I have reached a point where I know which season is for which type of crop.”

“Square-foot farming is a practice where in one square-foot, I grow as many as 16 different types of vegetables. This sort of farming is practised world-wide by those who don’t have space.”

Advertising is a stressful profession, where deadlines peek around every corner. Jauhari feels gardening and planting teaches one to be patient.

“Advertising is a profession of complete impatience. There is a lot of stress but what planting teaches you is the exact opposite. No matter how much pressure you put, the plant will flower only when it is time. What gardening really teaches you is that things will take their own sweet time and you can’t rush things. I think my terrace garden happened to me at the right time. It has stabilised me a lot and taught me patience.”

His plants are also his confidants today.

“It is usually believed that people who talk to their plants have a better output. So I now have someone to talk to as well and the best part is that they don’t reply back,” laughs Jauhari.

His terrace garden is completely organic and he has around 120 plants on his terrace today. His gardening escapades have also attracted monkeys who are frequent visitors and also big fans of the tomatoes and the brinjals or eggplants that he grows.

Composting is another aspect of organic farming that Jauhari is very passionate about. Like organic gardening he discovered composting too on one of his many visits to farmer markets.

“Again on one of my farmer markets visits I saw these people who were saying that don’t throw your waste and I saw three ‘matkas’ (earthen pots) sitting there. These ‘matkas’ were called ‘khamba’. I was very curious as to what these pots did. It is actually very sad if you think about it. All of us study science till class eight and nine at least but we never really put our minds to it or what it really means to us. Approximately 60 per cent of the garbage we throw out on a daily basis is kitchen waste and that is not waste. I learned how to convert this kitchen waste, in a matter of six weeks, into plant food. After six weeks it becomes what is called compost.”

The ‘khamba’ was nothing but three earthen pots, with holes punched into them, sitting on top of each other. All one has to do is put their daily kitchen waste into the pot until it is completely filled. Once the pot at the top is filled, put it at the bottom of the line-up and keep filling the second pot. By the time the third pot fills, the waste in the first pot will have already turned into compost and so it goes.

“All our everyday waste like leftover food, peels from vegetables and fruits, I put in a ‘dabba’ and I keep adding waste for about six to seven weeks by which time it gets converted into compost. If you pick it up and smell it, it smells like fresh earth. It is very easy to do and a lot of solutions are available for small apartments as well. You must have seen pictures of the Deonar dumping ground, there are mountains of garbage there and we can’t really get rid of them. Even if we get rid of one Deonar, two more will come up because that is the rate at which we are generating waste. If we all start composting, we can reduce our daily waste generation by 60 per cent.”

Three weeks after starting composting, Jauhari really had no waste to throw away.

“I stopped throwing waste after three weeks of composting. I had zero waste at home and the garbage collector came to me and asked me why I had stopped throwing waste and told me that keeping waste at home would lead to diseases. They had no idea about composting and that is why it is important to teach people about effective waste management. You can’t mix all kinds of waste. Plastics have to be dealt with in a certain way, medicinal waste has to be dealt with differently and kitchen waste will become beautiful plant food in six weeks.”

Any memorable moments from this organic journey of his?

“I had 10 plants full of gorgeous brinjals that I had grown and I was just waiting for the right time to pluck them and make delicious ‘baingan ka bharta’ using them. The morning I was to harvest them, I go up to the terrace and see that there are no brinjals on the plants. I saw a big gang of monkeys and one among them was sitting right there and crunching on my brinjals right in front of me. It was such a bizarre moment that I could only take a picture of him munching on my precious brinjals and not do much.”

And what does organic gardening really mean to him?

“It is the least we can do for our kids. We have done so much damage to the plant that probably by the time our kids grow up they may not even know what are plants and trees, they will probably be used to plastic trees. We must all think about what kind of planet we want to leave for the next generation.”