The show will be aired at 10 pm from Monday to Friday from January 23. It is also launching Bin Kuch Kahe from February 6 and plans to introduce other fiction shows in the months to come 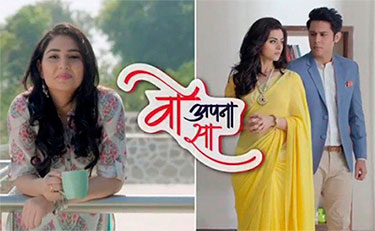 The show will be aired at 10 pm from Monday to Friday from January 23. It is also launching Bin Kuch Kahe from February 6 and plans to introduce other fiction shows in the months to come

According to Deepak Rajadhyaksha, Deputy Business Head, Zee TV, the show has the potential to become one of the most viewed on television and the channel is betting big on the prime-time show.

The show takes a look at how some relationships don’t go the way you expect them to but a few others, the most unexpected ones, go on to make a huge positive difference in our lives. Produced by Siddharth Malhotra’s Alchemy Films, the show asks ‘who really is your true soul mate?’

Rajadhyaksha says they have plans to introduce other fiction shows in the months to come. To a specific question, he said, “The current show is not regressive. It is very much about what happens today.”

Asked how advertisers have responded, Rajadhyaksha said, “The show (Woh Apna Sa) has got good advertisers on board.” He said advertiser response post demonetisation will get better in about a month and half. Scripts are ready for a year and the producers expect it to run beyond that. Rajadhyaksha said, “The show is a mature and sensitive concept around three well etched out characters enacted by an impressive cast. With its unique storyline, the show will entertain audiences.”

Woh Apna Sa casts Sudeep Sahir as Aditya Dhaniram, the male protagonist, a family man willing to sacrifice everything to keep his family happy. Riddhi Dogra plays his wife Nisha, a materialistic woman who believes that money is supreme and can buy love as well. Disha Parmar plays the role of Jhanvi, a woman of simplicity, upbringing and values that form the backbone of her mature personality. How Aditya tries to save his marriage and the way Jhanvi plays a role in his life is something to watch out for.