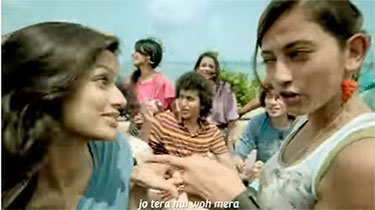 Taproot Dentsu collaborated with lyricist Amitabh Bhattacharya and composer Ram Sampath for Airtel’s jingle ‘Har ek friend zaroori hota hai’ back in 2011. No one could have guessed – before it was flashed on TV screens – the wonders it would do for Airtel.

With the success of ‘Har ek friend zaroori hota hai’, gradually, Airtel moved its telecommunications creative mandate to Taproot Dentsu altogether. Airtel campaigns were always very creative and innovative but since then, there has never been a low moment in any of the creative campaigns of the brand.

When asked if they ever thought that the ‘Har ek friend’ campaign would be a game-changer for them, Agnello Dias, Chairman and Co-founder, Taproot Dentsu, said, “We prefer to think of the brief on table and not about the account or where it is going. We did HFZ (Har ek friend zaroori’ to a specific purpose at a specific time and didn't think about too much else.”

To further the friendship quotient, the agency conceptualised another campaign for the brand, ‘Jo tera hai vo mera hai’. Like ‘Har friend zaroori hai’, this commercial too had a friendship theme and features a peppy song, whose lyrics has been provided by Amitabh Bhattacharya and music by Ram Sampath.

Another campaign by Taproot introducing ‘One touch internet’:

Then in 2014, Taproot created another ad for the brand where the woman was the boss of her husband at work and when back home, prepared food for him. The Twitterati reacted to the campaign with a mixed feeling. Some liked the concept, while some called it feminist.

To promote its night calling pack, Airtel came out with a sweet spot touching campaign, which was again much liked.

In August 2015, to announce the launch of 4G, the brand brought in a new face, who was until now called the ‘4G Airtel girl’. In the ad, she talked about the competency of the Airtel network over others.

Loved, trolled, debated and discussed in equal measure, the Airtel girl has gone on to become one of the most salient brand advocates of recent times. Then again in March 2016, Taproot Dentsu released an ad with the 4G girl in an all-new avatar. The campaign was launched after a break with an underlying message that Airtel 4G is not only fast but available in more parts of the country than one would think.

In June 2016, in possibly a first-of-its-kind initiative, Airtel has made its entire network coverage information public through an interactive online interface and asked customers for feedback to help improve its services and also created a campaign for the same.

Explaining the reason why they came back with the ‘Har ek friend zaroori’ song, Dias said, “Because we thought it would be an interesting twist to show the pain points the basket of services tackled by positioning them as ‘Some things in life are just not zaroori.'”

Commenting on the agency’s journey with Airtel, Dias said, “It's been a rollercoaster journey because the industry has gone through so much change at such a rapid pace both in terms of technology and mindset. It has always been a robust brand whose stature has been created by many partners over the years. You're always tilting one way or the other but overall the attempt is to keep riding and not fall over. So one tries one's best to stay upright.”

Airtel was launched in July 1995 in India by its parent company Bharti Airtel. It hired Rediffusion Y&R as it AoR (Agency on Record) in the 1990s. Rediffusion did quite a few good ads for Airtel.

In 2002, Bharti Airtel approached music composer AR Rahman to create its signature tune. It also released a television campaign featuring the composer. The original tune has been re-orchestrated several times to suit the tone of the commercial. One ad, featuring actor Shah Rukh Khan, even used a whistle version. The campaign was conceptualised by Rediffusion Y&R.

This was perhaps one of the best pieces of work done on Airtel. In fact, Airtel was named the 'World's Best Communications Brand of the year 2004' for the “Express Yourself” campaign at the World Communication Awards 2004 in London.

After almost 15 years, in 2010, the brand moved its Rs 400-crore account to JWT, who was already handling Bharti Airtel's DTH venture, Airtel Digital TV. The brand came back with fresh branding, new logo and the positioning of ‘Dil jo chahe paas laye’.

BestMediaInfo spoke with creative experts to know their viewpoint on the Airtel campaigns.

Jagdish Acharya, Founder and Creative Head, Cut The Crap, said, “The Airtel creative journey has been through peaks and plateaus but hasn’t gone downhill. That’s the good part. Almost every major campaign has left a mark of its own. The signature tune of AR Rehman, the wit and charm of ‘Har ek friend’, the 4G girl. My favourite has to be the ‘Har ek friend extensions.’ The friend who gives a missed call to the cops is monumental on its own.”

He further said, “Airtel campaigns have also been strategically sound and not merely fluffy but each on its own, without adding much to the whole. The not so good part: despite such illustrious creative, the brand does not have a strong, wholesome identity. The traveller is quite lost in the journey. Strong brands carve their paths carefully, they get clearer with each step they take, which is why I know these guys well – Vodafone and Idea, but can’t say the same about Airtel. It’s a classic example of the old brand saying – the whole is much larger than the sum of its parts.”

Hemant Shringy, Executive Creative Director, BBDO, said, “I think our market goes through phases and at different points in time based on the evolution of the consumer, different categories come into focus. I remember that focus moving from colas to telecom to e-commerce. And the most memorable work happens when you are in that phase. In that sense Airtel campaigns have done a great job. If I'm not wrong that started around the time of the Vidya Balan-R Madhavan ads and was at its peak during 'Har friend zaroori' and 'Jo tera hai woh mera', including the follow-up ads in the two campaigns. The last two years have been about e-commerce, but telecom is again at an interesting juncture and it'll be really exciting to what Airtel does.”