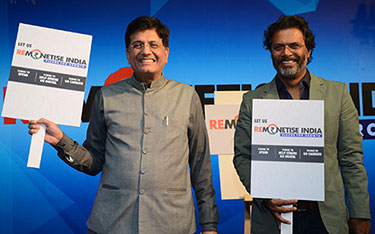 Keeping in view the current economic revolution in India, Times Network recently announced the launch of a nationwide initiative urging Indians to mark the next step forward from demonetisation and Pledge for Growth – ‘Remonetise India’. The movement seeks to encourage people and enable them digitally and use less cash and work to partner in India’s growth.

The movement was set in motion by M K Anand, MD and CEO, Times Network. Speaking about the initiative, Anand said, “India is coming to terms with one of the most revolutionary economic reforms that have taken place in its history. From standing in ATM queues to spending and investing back in the economy, the narrative of demonetisation needs to change from its current sentiment towards a movement that brings the economy back on track. We at Times Network take immense pride in announcing this nationwide initiative that will help educate our audience base of 10 crore Indians every month. The subject of the talk will be on how remonetisation and India’s transition to a digital less-cash economy can help India achieve significant growth, and how citizens can contribute to the same.”

Endorsing the movement, Piyush Goyal, Minister of State (IC) for Power, Coal, New and Renewable, said, “I would like to thank Times Network for taking up this cause and supporting the government in its move to remonetise India. I urge the citizens of our country and various stakeholders to join this movement and support the government in its future endeavours.”

As part of the movement, Times Network will conduct several on-ground activities like Aadhar camps, investor camps and cashless festivals apart from a 360 degree campaign approach that will involve various channels of communication including on-air, digital and social media promotions.

To rise and protect,

To stop doubting and start acting.

To spend now to revive demand, and India’s markets.

To help workers keep their jobs,

To teach and bring

Those around us into digitization.

Participate in our New Economy.

To use less cash,

To make it available for those more needy in our villages,

To bring more activities into the formal economy.

We pledge to Remonetise India.