The week-long initiative involving Maruti Suzuki, Radio Mirchi and Mumbai traffic police will begin on January 10 in Mumbai and include activities across different cities 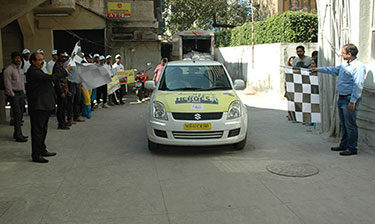 The week-long initiative involving Maruti Suzuki, Radio Mirchi and Mumbai traffic police will begin on January 10 in Mumbai and include activities across different cities

To address issues of road traffic awareness that plagues the country, Maruti Suzuki and Radio Mirchi in association with the traffic police department of Mumbai have come together for the second edition of ‘Maruti Traffic Heroes of India’ for Mirchi Traffic School.

As part of the activity in Mumbai, a convoy of branded cars will be flagged off daily to visit 10 traffic signals and cover important market places, residential colonies, schools and colleges on the way. At every traffic signal, Radio Mirchi personnel will gratify the city’s traffic police personnel for helping residents improve their traffic sense. They will give out prizes to those who adhere to traffic rules. The people will be asked to take pledge to follow road safety by signing a pledge card.

Batchu Venugopal, Commercial Branch Head, Maruti Suzuki, said, “We’d received a tremendous response for the campaign last year, and this year we hope to get more people to pledge to follow road safety and traffic rules. Our only aim is to curb wilful violation of traffic rules and make driving in the city a safe and pleasant experience for everyone.”

Sarvmeet Oberoi, Cluster Head, Radio Mirchi, said, “I think it is high time we as people took active participation in being good citizens of this country. One empowered person can educate hundred others, and we hope to educate people on the importance of adhering to road traffic rules.”

The week-long initiative starting January 10 will carry out activities across different cities like Gurugram, Delhi, Bangalore, Chennai, Kolkata, Lucknow, Chandigarh, Indore, Ahmedabad, Kochi, Pune, Mumbai, Hyderabad and Ranchi. The campaign will also look to recognise commuters who will be adhering to the traffic rules and wearing the protective gear; as well as acknowledge the traffic police personnel at the signals. Apart from this, the activity will also encourage people to take pledge to follow traffic rules across various corporates, mall and marketplaces.

City commuters can support this initiative by giving a miss call number to – 8000100129 and also be a part of the initiative by posting pictures of their fellow commuters’ #PledgeForRoadSafety who will be seen following the traffic rules. Lucky winners will be awarded by Radio Mirchi.