Do Gionee and Vivo outdoor ads ‘mirror’ each other?

While Vivo’s outdoor campaign is conceptualised by Lowe Lintas, Gionee India’s has been done by Mullen Lintas 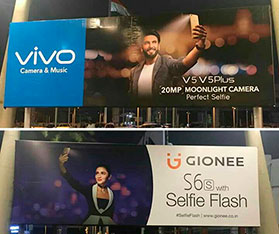 Do Gionee and Vivo outdoor ads ‘mirror’ each other?

While Vivo’s outdoor campaign is conceptualised by Lowe Lintas, Gionee India’s has been done by Mullen Lintas

We’ve witnessed high-voltage cola wars on television. We have also seen airlines come up with competitive creative outdoor campaigns to promote their services. Now we’re back with such competing outdoor campaigns and this time it’s turn of mobile phones.

Vivo and Gionee, both Chinese mobile handset brands, have been pretty aggressive when it comes to advertising in the Indian market. Vivo features Ranveer Singh who is seen taking moonlight selfies while he is out with his girlfriend. The campaign has been conceptualised by Lowe Lintas.

Gionee on the other hand features actor Alia Bhatt who goes a step further promoting the selfie flash feature of the phone as she asks ‘Who needs light?’ Gionee’s campaign is conceptualised by Mullen Lintas.

In a technologically advanced world, both these brands are promoting the same feature – of clicking a good selfie at night or in dim light. While the television commercials are different, the outdoor ads are almost mirroring each other. There is almost no differentiating factor in these outdoor ads. Even the bokeh backdrop is same.

Best Media Info spoke to few creative minds to find out what they think about the campaigns.

When asked on the idea behind Gionee’s outdoor campaign, Shriram Iyer, NCD, Mullen Lintas, said, “The client’s brief essentially was to communicate that the phone’s camera can take a low light selfie. Mobile advertising is based on the changing technology and we created the selfie flash term for them. The feature was the differentiator and the brand wanted to have a standard messaging across platforms, hence the creative.”

Both Iyer and Gaur point out that the shots for the outdoor campaign were taken while shooting for the television commercial. It is interesting that two agencies from the same group have created these campaigns.

Asked if creativity in outdoor is dying because of such similarity of campaigns, Mandeep Malhotra, Founding Partner and CEO, The Social Street, said it is not the case. Outdoor has seen a lot of creative campaigns, he said.

Malhotra is of the view that outdoor campaigns can be much better when clients know that their outdoor communication should not only do recall but also are impactful. A 30-second television commercial might necessarily be impactful. He feels that the outdoor creative for Vivo and Gionee could have been communicated differently than in the same manner.

Nima Namchu, CCO, Havas Worldwide does agree that the above ads are similar. He said, “The visual similarity is an accident. At the end of the day, both brands are promoting the same feature.”

He further explains that in the mobile category one has to highlight and promote features in their communication. If one leaves Apple and Samsung, all other brands are competing in selling their features. Namchu recollects that Google Pixel’s latest outdoor ad is similar to that of Apple because they have used a lot of white space and minimal content.

Satbir Singh, Founder, Thinkstr took to Facebook to express his comments on Vivo and Gionee’s campaign. The post read ‘Two Bollywood stars, two different phones, two billboards about 20 feet apart, Chennai airport.’ Singh feels that the creatives could have been different for the medium.

Gionee’s outdoor campaign is executed by IPG’s Rapport while Vivo’s outdoor campaign is executed by one their internal teams. It must be noted that Vivo has been aggressive with its marketing activities ever since they partnered with the Indian Premier League (IPL) last year. Gionee recently announced Virat Kohli as its brand ambassador. The brand will now jointly be promoted by Alia Bhatt and the cricketer.

It is interesting how outdoor media can compete in its communication. We’ve seen airline brands like Jet Airways, Kingfisher airlines (doesn’t exist now) and Go Air compete in the outdoor space. Shampoo brands like Pantene and Dove too have done it.