daCunha Communications launches Amul’s India 3.0, a brand that made a lasting impact

Amul’s India 3.0 is a unique take on 50 years of India's history, the highs and lows, through the eyes of the adorable little Amul moppet known for her witty insights 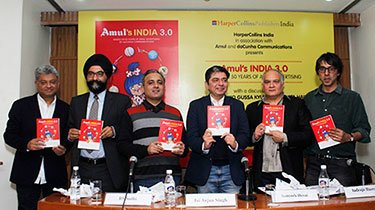 daCunha Communications launches Amul’s India 3.0, a brand that made a lasting impact

Amul’s India 3.0 is a unique take on 50 years of India's history, the highs and lows, through the eyes of the adorable little Amul moppet known for her witty insights

Amul’s ‘India 3.0’, a take on Amul’s campaigns over the years, is out on the stands. The guest writers in the book look at how the Amul girl has over the years covered the nation's concerns and obsessions, especially politics, Bollywood and cricket. They marvel at how, even in these times of intolerance, the Amul girl retains her sense of innocence and fun, and continues to hold a mirror to our high hopes and troubling lows.

The first two editions of the book had sold 1.5 lakh copies. The latest edition was launched by daCunha Communications on December 26, 2016. Published by HarperCollins India, the 232-page book costs Rs 299.

The book launch was followed by an interactive discussion chaired by Rahul daCunha. Eminent advertising and media personalities Santosh Desai, Indrajit Hazra, Jai Arjun Singh and Amul’s MD RS Sodhi were present at the release of the book.

Explaining why the book was published, RS Sodhi, Managing Director, Gujarat Cooperative Milk Marketing Federation (Amul), said, “It is the most successful campaign of the time. If you talk about any brand, products are known along with the brand. But when you talk about Amul, the first thing one would say is that he likes the Amul campaigns. People remember Amul because of its campaigns first then the product. Amul campaigns are unique and good. So, everybody wants to know about the history of the campaigns and its journey. In first two editions, we have sold 1.5 lakh copies. I think the topics covered in the book were liked by everybody and that is why we keep coming out with new editions.”

Elaborating on how is the third edition is different from the previous ones, daCunha, Owner, daCunha Communications, said, “A book like this will keep on getting better. It’s not like a movie where the third part is normally not good. Somehow in a book you learn from your previous experience. This book has more depth. Amul is one of the great brands in the country.”

Sharing an interesting finding, daCunha said, “Shashi Tharoor’s sister was one of the first Amul model when she was two years old.”

With celebrity contributing writers including the likes of Amitabh Bachchan, Shashi Tharoor, Jug Suraiya, Indrajit Hazra, Jai Arjun Singh, Santosh Desai, Naresh Fernandes, Agnello Dias, Arnab Goswami and Karan Johar and colourful Amul adverts, Amul’s India 3.0 is a unique take on 50 years of India's history, the highs and lows, through the eyes of the adorable little Amul moppet, a household figure, known for her witty insights about here and now, looking at India and the world around. Covering topical grounds and popular incidents from the contemporary context, this is the all-new, comprehensively revised and updated edition that speaks eloquently for the curious instance of when a butter brand becomes the barometer of a nation. Amul's India 3 is an archival celebration that will engage brand gurus and media pundits, as well as regular fans and admirers of Amul.

Commenting on his contribution to the book, Dias said, “My contribution to the book was about the impact that Amul brand communication, specifically the famed 'Amul hoarding' has had on an entire generation of young creative people at the time. So, it is more from a point of view of impact on advertising's creative generation at the time I was entering the business. My own personal view about it is a humble salute to a brand that has got so enmeshed into the social and emotional fabric of the country that it has practically earned the right to be a legit social commentator of the times we live in, much like Laxman's common man.”

Santosh Desai, MD and CEO, Future Brands, said, “I have contributed to the book this time also. The Amul campaigns have always been unique and I have written about it in the book. I have talked about the theme that the Amul girl has always maintained and commented on throughout her existence.”

This edition is her third excursion into the minds of our finest writers and social commentators, many of them new contributors to the Amul's India series. Their essays and interviews offer the most interesting angles on the freshness as well as lasting impact of the world's longest-running outdoor advertising campaign.

During the engaging panel discussion preceding the launch, many insights and observations were shared about the iconic Amul Girl and her relevance in contemporary times, her larger role in the society, and her continuing resonance among other aspects. Amul India’s MD, RS Sodhi, said that while they don't have big advertising budgets, the creativity of the campaign has carried it through for so long, and when he is travelling and interacting with people, he often realises that it's not the butter that people recognise the brand for immediately, but the Amul girl campaign.

Eminent panellist Santosh Desai said that as a mascot, the Amul girl belongs to all who have grown up with her around, and is the spokesperson of the times. As ad man daCunha wondered about whether the Amul girl needs to change, journalist Indrajit Hazra reflected that she needn’t as everything around her is changing. In film writer Jai Arjun Singh’s words, the Amul girl is like the anchoring figure that provides the much-needed familiarity to make sense through the information overload of our times.