The channel launched #ShareTheChangeBeTheChange, a social media campaign in a rather filmy style. It urged people to help those who are in need of cash urgently 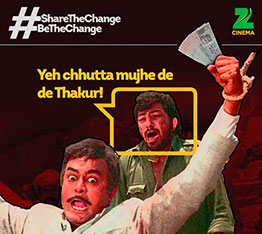 The channel launched #ShareTheChangeBeTheChange, a social media campaign in a rather filmy style. It urged people to help those who are in need of cash urgently

As someone has rightly said, “Laugh at your challenges and it will give you strength to overcome them.”

While the industry is trying to cope with the challenges posed by demonetisation every day, Zee Cinema -- the Hindi movie channel from ZEEL -- has launched a social media campaign that takes on the demonetisation in a quirky lighter positive mode.

Titled #ShareTheChangeBeTheChange, the social media campaign invited tweets and messages expressing the need of change (chhutta) in a filmy style. The channel has also kept uploading images with dialogues tweaked to include the demonetisation angle to it.

The government’s sudden call to ban old Rs 500 and Rs 1,000 notes to curb black money left the country in a tizzy with commoners queuing up at banks day after day. To make the situation easier, several companies rose up to the occasion and undertook interesting campaigns to mobilise support. Zee Cinema also launched an innovative social media campaign #ShareTheChangeBeTheChange.

Zee Cinema tried to convey a positive message to the people through the campaign. It urged people to help those who are in need of cash urgently, to encourage people to share their change (chhutta) and do their bit in this current scenario. Keeping with their brand promise of being the largest theatre for Hindi Movies, Zee Cinema used filmy characters and iconic dialogues to add a filmy twist to their initiative.

The campaign created maximum intrigue among the users for its innovative execution and emerged as an instant twitter trend. Some genuinely funny tweets poured in from users supporting the campaign.